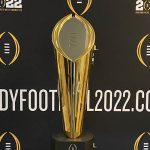 If you’d viewed the preseason college football rankings in August and failed to pay attention in the ensuing four months, seeing Alabama at number one in the College Football Playoff (CFP) committee’s ranking, the same position that they occupied before play began in 2021, wouldn’t come as a surprise. Bowl Season is a combination of a Winning D1 Football Season and successful selection by the NCAA Selection Committee, who review the best performances from the recently ended season across all conferences considering several variables like win-loss record and difficulty of opponents. Next the Committee will set up a final Bowl Game for each teams selected, which are ordered in importance and difficulty. During the first week of Bowl Season (Christmas Week) smaller bowls games are played. While the New Year Features the Most Important Bowls and the College Football Playoff and the National Champion.
JOIN NOW Why Choose MyBookie's Sportsbook?

There is nothing betting than waking up on New Year’s Day and knowing that one of the biggest days in college football is finally upon us. It’s always a big day in bowl season, and while we are not getting as many games as usual, there is still a lot of good football on tap. Besides the playoff semi-finals, we also have a pair of very good looking bowl games to watch, starting at noon, when the unbeaten Cincinnati Bearcats will look to hit double-digit wins for the season when they take on the Georgia Bulldogs. This will feel like a road game for the Bearcats, as they are going to be in Bulldog country, but this is also a team with a point to prove. Georgia comes into this game as a 7-point favorite, with the point total set at 50 ½. That said, let’s take a closer look at both team so you can place your bets against their NCAAF odds.

Why bet on the Georgia Bulldogs

While a lot of teams would love to be in one of the New Year’s bowl games, this will still feel like a bit of a letdown for the Georgia Bulldogs. This is a school that expects to be challenging for the national championship every year, but when you consider the issues they had at QB this season, this may have been the best they could have asked for. The offense has come to life since JT Daniels was healthy enough to take the starting role, winning 3 in a row and averaging over 40 PPG. No surprise then that the OVER has hit in 6 of their last 7 games. They have not been a great pick against the spread, going 2-4 ATS in their last 6.

Once again, we are having a discussion about whether or not a team outside of the Power 5 deserves to be in the college football playoffs. The Bearcats went a perfect 9-0 on the season and looked good getting there, yet they had to settle for the #6 ranking on the AP Top 25. You can argue that they played lesser opponents, but they can only beat the teams in front of them. Taking down a big SEC program might well prove that they do deserve to be among the big boys. The Bearcats are 8-4 ATS in their last 12 games overall, but they have gone 5-1 ATS in their last 6 games played on a Friday. When playing as an underdog, the UNDER has hit in the last 5 games for the Bearcats.

Will Georgia look down on this game a little or will they enjoy playing in familiar territory? I think this team feels like they have something to prove, so I am on the Bulldogs to win, but I think this one will be close. I do think we are going OVER, though.

Posted: Thursday, December 31, 2020 8:01, EST
There is nothing betting than waking up on New Year’s Day and knowing that one of the biggest days in college football is finally upon us. It’s always a big day in bowl season, and while we are not getting as many games as usual, there is still a lot of good football on tap. Besides the playoff semi-finals, we Read More

Posted: Tuesday, December 29, 2020 8:17, EST
While college football fans are looking ahead to the playoff semi-finals and the National Championship Game, there are still plenty of games on the schedule to keep everyone occupied until the big games arrive. Bowl Season has been hurt a little by games being cancelled due to the pandemic, but we still have enough games being played to keep fans Read More

Posted: Friday, December 25, 2020 3:20, EST
Any football fans who have this week off for the holidays are having a bit of a treat, as we are now in the opening week of bowl season. Even if you haven’t been able to catch any of the action yet, you can certainly get your fill this weekend, with no less than 3 bowl games on tap on Read More

Posted: Friday, December 25, 2020 3:12, EST
We are in the opening week of bowl games, and from what we have seen to this point, teams are going all out to win. The three games that have been played at the time of writing have been of the high-scoring variety, so that is a trend to watch if you are keen on betting the OVER. The busiest Read More

Posted: Thursday, December 24, 2020 11:16, EST
The Marshall Thundering Herd and Buffalo Bulls will both be looking to cap off their 2020 seasons in style when they square off in the 2020 Camellia Bowl on Christmas Day. After getting off to perfect starts that catapulted both teams into the national Top 25, Marshall and Buffalo enter this matchup coming off of losses that ruined their bigger Read More

Posted: Wednesday, December 23, 2020 12:00, EST
This time of year is always a good time to be a fan of college football, as we have games going just about every day of the week. Yes, it is bowl season, and while many of the teams that you will see playing, especially in the earlier bowl games, are not that well known to you, it is still Read More

Posted: Tuesday, December 22, 2020 4:08, EST
It is going to be interesting to see if the first bow game of the season sets the tone for the rest. The first game saw Appalachian State run wild, downing North Texas by a score of 56-28. Anyone who took the OVER in that game would have been able to relax quite early, as the Mountaineers had 35 points Read More

Posted: Tuesday, December 22, 2020 3:54, EST
Bowl season began on Monday night, with Appalachian State running roughshod over North Texas in a lopsided 56-21 win. While it was fun to watch the Mountaineers put on a bit of an offensive show, we can only hope that the rest of the games this week, and the remainder of the bowl season, are a little bit more competitive. Read More

Posted: Tuesday, December 22, 2020 3:21, EST
The Louisiana Tech Bulldogs (5-4) and Georgia Southern Eagles will both look to cap off their respective 2020 seasons in style when they square off in the 2020 R+L Carriers New Orleans Bowl on Wednesday. Both teams will be looking to rebound from losses in their respective regular season finales. Now, let’s find out where the best college football betting Read More


Other Division I FBS Bowls | Outside the New Year's Six

Besides the New Year's Six games, there are a number of other postseason invitational games. With these games, what normally happens is that two conferences will agree to send teams of a particular standing to a game beforehand. When it comes down to the payout of each bowl game depends on the prestige of the bowl: bigger the game, the bigger the payout.