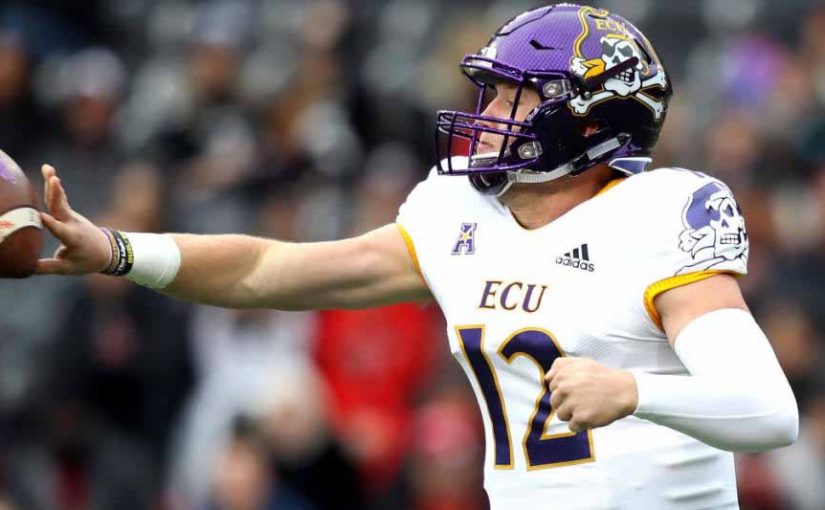 Unbeaten Cincinnati rose to No. 4 in the new College Football Playoff Top 25, meaning the Bearcats could become the first Group of 5 school to play in the national semifinals. They visit a dangerous East Carolina team on Friday with UC a two-TD favorite on the NCAAF odds.

Cincinnati blew out East Carolina 55-17 last year. UC quarterback Desmond Ridder threw for 327 yards and three touchdowns and ran for another score. The Bearcats’ offense produced 653 total yards and averaged nearly 10 yards per play.  ECU had 293 total yards, more than 100 yards below its season average. After passing for 535 yards against the Bearcats in 2019, Holton Ahlers threw for 87 yards with three interceptions. He was sacked four times. East Carolina still leads the all-time series 13-11.

Why Bet on Cincinnati?

The Cincinnati football team made history on Tuesday by being ranked No. 4 in the fourth College Football Playoff Rankings. The Bearcats are the first non-Power 5 team to crack the Top 4 in the history of the CFP (since 2014).

Ridder, who finished with 274 yards on 17 of 23 passing and 46 rushing yards, was one of 34 seniors who was honored before the game. The four-year UC class registered its 42nd win since 2018, the most in a four-year stretch in UC history.

The win was Cincinnati’s 14th in a row against AAC and 37th straight win against unranked opponents. The Bearcats are 20-2 (.909) since 2019 against AAC opponents, which is the best mark in the conference. UC is 35-2 when leading at the half under Coach Luke Fickell. Ridder can become the third FBS quarterback ever with 43 wins by beating ECU.

Cincinnati and current-No. 1 Georgia are the only two teams in the nation that rank in the Top 10 in both scoring offense (UC – 40.0 ppg, 8th) and scoring defense (UC – 16.0 ppg, 6th). Cincinnati is one just three undefeated teams, joining Georgia and UTSA. UC has nine wins by double digits.

Why Bet on East Carolina?

East Carolina (7-4) beat Navy 38-35 last week. Freshman Owen Daffer drilled a 54-yard field goal as time expired – eclipsing his previous best by 16 yards.  ECU had tied it at 35-35 with 5:01 to play on a Holton Ahlers touchdown pass and two-point conversion before forcing Navy to punt with 1:11 to play.

Ahlers, who threw for 405 yards and three touchdowns, got the Pirates in position to score with a 46-yard pass to Tyler Snead. But after Keaton Mitchell managed just 1 yard, the clock drained down to 4 seconds. A false start penalty moved the ball back to the 36 – a timeout rescued the Pirates from a 10-second runoff and ending regulation. The 54-yarder was the longest game-winner in school history.

Ahlers completed 27 of 32 passes in throwing for 400-plus yards for the fifth time in his career. He also rushed for 48 yards on seven carries. Mitchell surpassed the single-season 1,000-yard mark with a 23-yard rush on the initial snap of the game against Navy, becoming the first East Carolina running back since 2013 to reach four digits in a campaign. East Carolina’s 1,895-yard rushing total in 2021 marks the program’s third-highest 11-game clip since 2000.

It will be the Pirates’ first against an opponent ranked in the AP’s Top 4 since facing West Virginia at Dowdy-Ficklen Stadium in 2006. East Carolina is 13-62-1 all-time against opponents ranked in the Associated Press Top 25 poll (at the time the game was played). East Carolina is the only Group of 5 program nationally which has hosted ranked AP opponents in each of the last five years.

Posted: Thursday, November 25, 2021 10:25, EST
Unbeaten Cincinnati rose to No. 4 in the new College Football Playoff Top 25, meaning the Bearcats could become the first Group of 5 school to play in the national semifinals. They visit a dangerous East Carolina team on Friday with UC a two-TD favorite on the NCAAF odds. How to Bet Cincinnati at East Carolina NCAA Football Odds & Read More

Posted: Friday, October 22, 2021 8:47, EDT
There is no chance that No. 2 Cincinnati loses at Navy in AAC action on Saturday but simply whether the Bearcats keep their focus and are able to cover a big number on the NCAAF odds. How to Bet Cincinnati at Navy NCAA Football Odds & TV Info When: Saturday, noon ET Where: Navy-Marine Corps Memorial Stadium TV: ESPN2 Stream: Read More

Posted: Tuesday, October 5, 2021 9:19, EDT
No Group of 5 school has ever reached the College Football Playoff, but that may change this season with Cincinnati of the American Athletic Conference up to No. 5 in the Associated Press Top 25 off a win over Notre Dame in Week 5, ending the Irish’s 26-game home winning streak. The Bearcats are still good long-shot value to win Read More

Posted: Thursday, November 12, 2020 8:27, EST
Three college football games around the country on Friday night and by far the best team in action is No. 7 Cincinnati, which could crash the College Football Playoff, as the Bearcats host East Carolina in AAC action. UC is a big favorite on the NCAAF odds. How to Bet East Carolina at Cincinnati NCAA Football Odds & TV Info Read More

Posted: Thursday, January 2, 2020 8:28, EST
The only ranked team in action around college football on Thursday is No. 21 Cincinnati as the Bearcats, runners-up in the American Athletic Conference, take on Boston College of the ACC in the Birmingham Bowl. UC is a touchdown favorite on the Mybookie NCAAF odds. How to Bet Boston College vs Cincinnati Birmingham Bowl Odds & Game Info When: Thursday, Read More

Posted: Wednesday, December 4, 2019 11:43, EST
The 16th-ranked Memphis Tigers will look to take care of business at home when they host the 21st-ranked Cincinnati Bearcats in their 2019 American Athletic Conference championship showdown on Saturday afternoon. While Cincinnati has suffered two losses, the Bearcats will look to stop Memphis from potentially reaching a New Year’s Day bowl game by finishing with one loss. If you’re Read More

Posted: Tuesday, November 26, 2019 2:10, EST
The 2 best teams in the American Athletic Conference throw down on Friday when Cincinnati battles Memphis. The Bearcats are 10-1. The Tigers are 10-1. Which team blinks in this duel? Keep reading for college football odds, analysis and a free pick for Cincinnati vs Memphis! Cincinnati vs Memphis 2019 College Football Week 14 Lines & Game Analysis Weather Forecast Read More

Posted: Friday, November 22, 2019 2:58, EST
While the entire college football season is always a ton of fun to watch, it’s the final few weeks where things tend to reach a fever pitch. We are in the final two weeks of the regular season, with the jostling for positions and playoff spots still going strong. Those two weeks will be followed by Conference Championship Weekend, where Read More