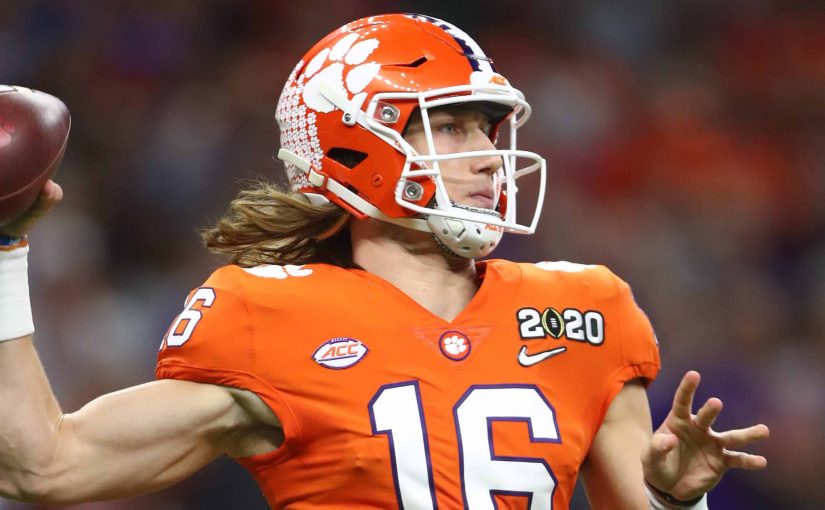 Six-time consecutive ACC football champion Clemson opens conference play on Saturday as a huge NCAAF betting favorite over a school it has dominated in recent years in Georgia Tech. The Tigers haven’t lost a home game in years.

Clemson rolled Georgia Tech 73-7 last year. The Tigers piled up 52 points in the first half behind five touchdown passes from quarterback Trevor Lawrence, who is of course now in the NFL. The 52 points were Clemson’s most in a first half against an ACC opponent, breaking its previous record of 49 against Wake Forest in 1981. Lawrence was 22-27 passing for 391 yards and five touchdowns in the first half alone. He finished with 405 yards through the air. Clemson’s 66-point victory margin tied for its seventh-largest all-time and its largest since a 66-point win against South Carolina State in 2014.

While Clemson ha won the past six in the series, Georgia Tech leads 51-33-2.

Why Bet on Georgia Tech?

The Jackets (1-1) come off a 45-17 win over Kennesaw State. Jordan Yates set a Georgia Tech record with four touchdown passes in his first-career start. Yates, who completed 17-of-23 passes for 254 yards, became the first Yellow Jacket to ever throw for four touchdowns in the first start of his collegiate career. His four TD passes also tied for the third-most ever in Georgia Tech history, just one shy of the single-game school record shared by Eddie McAshan (1972 vs. Rice) and Joe Hamilton (1999 vs. Clemson). Tech’s 28-point margin of victory is its largest in three seasons head coach Geoff Collins (prev.: 23 in 56-33 win over Duke, Nov. 28, 2020).

Receiver Kyric McGowan caught two touchdown passes (4 and 39 yards). The graduate transfer from Northwestern has three touchdown receptions in his first two games at Georgia Tech, which is one more than the two that he caught in his first four collegiate seasons. Jordan Domineck was named ACC Defensive Lineman of the Week after becoming the first NCAA Division I FBS player in 12 years to record a sack, three tackles for loss, two forced fumbles.

It presumably will be Yates at QB here but not for sure. It could be Jeff Sims, who started all 10 of Tech’s games last season and the season opener against Northern Illinois. Sims was knocked out of the Northern Illinois game after injuring his left arm or shoulder. Yates replaced him in that game and then had a superior performance against the Owls. Including his backup role against Northern Illinois, Yates has thrown five touchdown passes without an interception.

Why Bet on Clemson?

Clemson (1-1) followed an opening loss to Georgia with a 49-3 win over South Carolina State last week. Five different Tigers found the endzone and Clemson amassed 262 passing and 242 rushing yards. DJ Uiagalelei finished the day 14-24 for 171 yards and a touchdown, while also scampering for 23 yards and two touchdowns on five carries.

Clemson’s defense held SC State to 235 total yards of offense (132 passing, 103 rushing) and held an opponent without an offensive touchdown for the second-straight game. This marks Clemson’s first time doing so since holding Kent State and Auburn out of the end zone in the first two games of 2017. The last time Clemson held its first three opponents without an offensive TD was 1950.

Clemson enters this contest having won 29 consecutive games at Death Valley, a school record and the nation’s longest active streak. With a win on Saturday, Clemson can tie 1928-33 Tennessee, 1952-61 Auburn and 1994-99 Florida (30 each) for the 21st-longest home winning streak in FBS history. It would be the 24th home winning streak of 30 games or more in FBS history.

The Tigers are looking to improve to 43-25-1 in conference openers since joining the ACC and 53-3 against ACC opponents (including postseason play) since the start of the 2015 season.

Clemson is attempting to win a seventh straight home contest against Georgia Tech, dating back to 2010. The current six-game home winning streak against the Yellow Jackets is already Clemson’s longest such streak in series history.

Posted: Tuesday, December 8, 2020 9:43, EST
Just one Power 5 Conference game on Thursday around college football this week – of course, there’s always the chance it could get canceled – as Pittsburgh concludes its regular season with a trip to Atlanta to face Georgia Tech. The Panthers are just under TD favorites on the NCAAF lines. How to Bet Pittsburgh at Georgia Tech NCAA Football Read More

Posted: Friday, October 30, 2020 9:25, EDT
No. 4 Notre Dame has barely been challenged yet in its first – and apparently only – season in the ACC, and oddsmakers don’t expect the Fighting Irish to be in much jeopardy on Saturday, either at unranked Georgia Tech. How to Bet Notre Dame at Georgia Tech NCAA Football Odds & TV Info When: Saturday, 3:30 PM ET Where: Read More

Posted: Thursday, October 15, 2020 9:54, EDT
Top-ranked Clemson could be on letdown alert Saturday with an early kickoff at Georgia Tech as the Tigers had a huge game last week against then-No. 7 Miami. Still, college football oddsmakers have Clemson as a huge favorite vs. the Yellow Jackets. How to Bet Clemson at Georgia Tech NCAA Football Odds & TV Info When: Saturday, noon ET Where: Read More

Posted: Friday, September 18, 2020 4:32, EDT
With the 2020 NCAA college football season heading into its third week of action this coming weekend, it’s time to find out which Week 3 matchups are offering the best betting value against their College Football odds. NCAA Football Analysis – Top Week 3 Games to Bet On Whether you like making straight-up (SU), moneyline wagers, against-the-spread (ATS) picks over Read More

Posted: Thursday, November 28, 2019 8:48, EST
Could No. 4 Georgia be caught looking ahead to a showdown with top-ranked LSU next week in the SEC title game and overlook rival Georgia Tech this Saturday? This is the Yellow Jackets’ bowl game since they won’t qualify for a postseason game. They are sizable home dogs on the Mybookie NCAAF odds. How to Bet Georgia at Georgia Tech Read More

Posted: Wednesday, December 26, 2018 8:00, EST
The Minnesota Golden Gophers and the Georgia Tech Yellow Jackets will both look to finish off their seasons in style when they battle in the 2018 Quick Lane Bowl on Wednesday, December 26. Now, let’s find out which team is offering the best value against their college bowl betting odds.   Minnesota vs Georgia Tech 2018 Quick Lane Bowl Odds Read More

Posted: Tuesday, November 20, 2018 11:36, EST
Georgia hosts intrastate rival Georgia Tech on Saturday in a matchup that could help the Bulldogs stamp their ticket to the College Football Playoff. Georgia has played as well as any team in the nation since their lone loss to LSU earlier in the season. Will the Bulldogs head to the SEC Championship on a roll? Or, will Georgia Tech Read More

Posted: Wednesday, September 19, 2018 9:53, EDT
No. 3 Clemson opens defense of its ACC title on Saturday as the Tigers start conference play with a matchup at tricky Georgia Tech and the Yellow Jackets’ option offense. The Tigers are “only” 17-point favorites on the NCAA Football Week 4 Odds. How to Bet Clemson vs Georgia Tech NCAA Football Week 4 Odds & Game Info The latest Read More