NCAA Football Week 12 Lines, Analysis, and Picks: For Sure Winners this Week 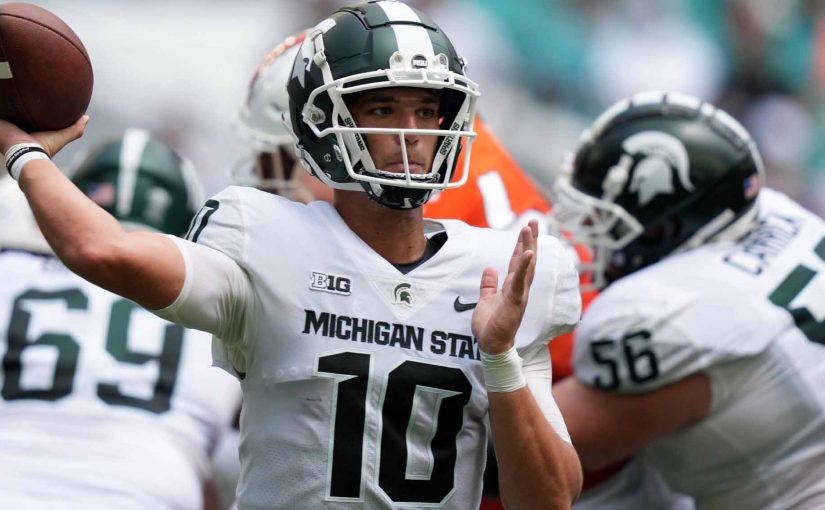 Off their first loss of the season, the Michigan State Spartans slipped to No. 7 in the latest College Football Playoff rankings, but they still can get to the playoff by winning out. They host Maryland on Saturday as nearly two-TD favorites on the NCAAF odds.

The teams tried to play twice last season but eventually couldn’t because of COVID issues. The Spartans lead the overall series, 9-2, including a 6-1 record in East Lansing. The Spartans are 5-1 against the Terrapins since Maryland joined the Big Ten in 2014, including a three-game winning streak.

Why Bet on Maryland?

The Terps (5-4) lost 31-14 at home to Penn State last week. Junior QB Taulia Tagovailoa completed 47-of-57 passes for 371 yards, one touchdown and one interception. The 41 completions were the second-most in a game school history and the 57 attempts tied for the third-most in a game in history.

Tagovailoa was kept short all game, unable to complete any passes further than 20 yards, and most were much shorter as Penn State kept everything in front. Tagovailoa fumbled on the Penn State 10 in the third quarter when a high snap deflected of his hands, then off his running back straight to a Penn State defender, and he also threw the game sealing interception to Ji’Ayir Brown on the PSU 13, which Brown returned for a TD.

It was Tagovailoa’s sixth career 300-yard game and fifth this season. He is second to Scott Milanovich (1992-95) for most 300-yard passing games in a career as Milanovich posted 10 300-yard games for the program record. Tagovailoa now has the third-most single season completions (239) in program history and is only 47 behind John Kaleo’s record of 286 in 1992.

Tagovailoa’s 2,755 passing yards this season puts him third all-time in single season passing yards, 744 yards behind Milanovich’s program record of 3,499 in 1993. In addition, the junior’s 18 touchdown passes this season are tied for the fifth-most in program history and only one behind Scott McBrien’s 19 for fourth all-time. In only 13 games as a Terp including last season, Tagovailoa already stands 10th all-time in career passing touchdowns with 25, only one behind Neil O’Donnell for ninth-all time, and 12th all-time in career passing yards with 3,766, only 121 behind Perry Hills for 11th all-time.

In his time as a Terp beginning in 2020, Tagovailoa has averaged 289.7 passing yards per game, the fifth-highest over that time span of any Power Five quarterback that has played in 2020 & 2021 and the most in the Big Ten.

Defensively, Maryland ranks 23rd in the country and fourth in the Big Ten with 26 sacks through nine games, an average of 2.89 per game. The 26 sacks have been for a loss of 191 yards, the 15th-most sack yards in the country and second-most in the Big Ten, trailing only Ohio State’s 230. The Terps 26 sacks are the most through the first nine games of a season since totaling 32 in 2015.

The Spartans (8-1) were upset 40-29 at Purdue last Saturday. The Boilermakers outgained the Spartans, 594-458, led by Purdue quarterback Aidan O’Connell, who completed 40 of 54 throws for 536 yards and three touchdowns.

Michigan State made it a one-score game by driving 83 yards on just eight plays to cut the deficit to 37-29 with 5:03 left. However, on Purdue’s next play from scrimmage, O’Connell completed a 46-yard screen pass, which led to Mitchell Fineran’s fourth field goal of the game from 22 yards out that sealed the victory.

Junior running back and Heisman Trophy candidate Kenneth Walker III posted his sixth 100-yard rushing outing of the season with 146 yards on 23 carries. He now has 11 100-yard rushing games in his career (two at Wake Forest in 2019, three at Wake Forest in 2020; six at Michigan State in 2021). Walker scored his 15th rushing TD and 16th overall TD of the season with a 14-yard score in the second quarter. Walker III continues to lead the FBS in rushing, averaging 148.9 yards per game. He also leads the FBS in total rushing yards (1,340), yards after contact (976) and 20-plus yard carries (16).

Senior safety Xavier Henderson leads the team and ranks sixth in the Big Ten with 75 tackles. He also ranks first on the team and tied for eighth in the conference with a career-high 9.0 tackles for loss, including two sacks. The Spartans have forced six turnovers in their last three games (three at Indiana; two vs. Michigan; one vs. Purdue). MSU has a +32-point advantage in points off turnovers this season (62-30).

Will Sparty have top receiver Jalen Nailor this week? He is the second-leading receiver on the Spartans with a receiving line of 32/584/6 on 61 targets but was out vs. Purdue. Offensive tackle Jarrett Horst (medical reasons) also missed the game and is questionable for Maryland.

Posted: Thursday, November 11, 2021 8:54, EST
Off their first loss of the season, the Michigan State Spartans slipped to No. 7 in the latest College Football Playoff rankings, but they still can get to the playoff by winning out. They host Maryland on Saturday as nearly two-TD favorites on the NCAAF odds. How to Bet Maryland at Michigan State NCAA Football Odds & TV Info When: … click title for full article.

Posted: Thursday, October 29, 2020 10:46, EDT
There are three college football games around the country on Friday – the only sport going that night – and the lone one from a Power 5 Conference is Minnesota visiting Maryland in the Big Ten. The Gophers are heavy favorites on the NCAAF odds. How to Bet Minnesota at Maryland NCAA Football Odds & TV Info When: Friday, 7:30 … click title for full article.

Posted: Tuesday, November 5, 2019 11:55, EST
Ohio State hosts Maryland in Week 11. The Buckeyes take on the Terrapins as a massive over 42 points favorite. Will Ohio State continue dominating teams straight up and against the spread? Or, will the Terrapins manage to keep this matchup closer than the betting line? Check out the college football odds, a preview and a free pick for Maryland … click title for full article.

Posted: Wednesday, October 30, 2019 4:23, EDT
While 14th ranked Michigan might not have a shot to reach this year’s College Football Playoff, the Wolverines will be looking to boost their chances of winning the Big Ten title when they hit the road to take on a Maryland Terrapins team that is in the midst of some big-time struggles heading into Week 10. With Michigan looking for … click title for full article.

Posted: Thursday, October 24, 2019 5:46, EDT
One of the great things about the college football season is that we always see at least one team emerge as a bit of a surprise dark horse. Even when these teams are winning week after week, they seem to have a way of flying under the radar, very often because they are playing in a conference where there are … click title for full article.

Posted: Thursday, November 22, 2018 11:23, EST
Penn State hosts the Maryland Terrapins with hopes of claiming a spot in a New Year’s Day Bowl Game. The Terrapins have played much better in recent weeks, though. Can Maryland stand up to tough Penn State on the road? Maryland vs Penn State NCAA Football Week 13 Odds & Prediction Last Saturday, we saw… The future is BRIGHT!!#FTT pic.twitter.com/PkGpqzdKt3 … click title for full article.

Posted: Thursday, November 15, 2018 8:08, EST
It’s pretty simple for No. 9 Ohio State on Saturday: Win at mediocre Maryland, and the Buckeyes will host Michigan for a spot in the Big Ten Championship Game. And a win there likely gets OSU into the College Football Playoff. The Terps are more than two-TD NCAAF betting underdogs.   How to Bet Ohio State vs Maryland NCAA Football … click title for full article.

Posted: Thursday, October 4, 2018 2:01, EDT
In college football, it is fair to suggest that some programs are held to a much higher standard than others. These are usually the bigger programs that have made winning a tradition and who are always expected to be challenging for a National Championship. Those demands are incredibly tough on the team and the coaching staff, as everyone knows how … click title for full article.