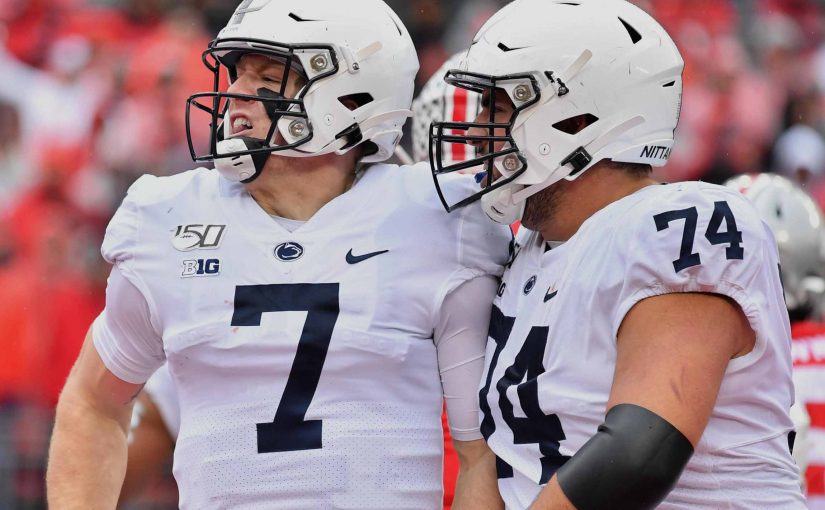 Should No. 7 Penn State lose at home vs. unranked Illinois on Saturday? Absolutely not, but the Lions could be pushed a bit if they overlook the Illini and toward next week’s showdown vs. Ohio State. PSU is a heavy favorite on the NCAAF odds vs. Illinois.

These schools finished the 2020 regular season against one another and Illinois lost 56-21 at Penn State. The Lions’ Jahan Dotson caught six passes, scored twice and racked up 239 all-purpose yards to help Penn State turn a 21-all first-quarter duel into a blowout. Sean Clifford tossed both touchdowns and added 285 yards on 16-for-22 passing. Penn State leads the all-time series 20-5 and has won the past three. Illinois’ last win over Penn State was in 2014, when David Reisner’s 36-yard field goal with eight seconds left secured a 16-14 victory.

Why Bet on Illinois?

Why Bet on Penn State?

Penn State (5-1) also was last in action on Oct. 9, losing 23-20 at No. 3 Iowa. The Nittany Lions got off to a quick start in the game, jumping out to a 17-3 lead in the first half, but the Iowa defense would hold Penn State to just three second half points as the Hawkeyes came from behind for the victory. QB Sean Clifford completed 15-of-25 passes for 145 yards and rushed for a TD before leaving the game late in the second quarter. He wouldn’t return.

It appears as if Clifford will play in this game as he was at practice this week but if not redshirt sophomore Ta’Quan Roberson and true freshman Christian Veilleux split first-team work in practice at some points this week. Roberson struggled mightily in place of Clifford vs. Iowa. He completed only 7-of-21 passes for 34 yards with two interceptions. In 11 possessions, he moved the Lions into field goal range once and to midfield just one other time.

Posted: Thursday, October 21, 2021 4:46, EDT
Should No. 7 Penn State lose at home vs. unranked Illinois on Saturday? Absolutely not, but the Lions could be pushed a bit if they overlook the Illini and toward next week’s showdown vs. Ohio State. PSU is a heavy favorite on the NCAAF odds vs. Illinois. How to Bet Illinois at Penn State NCAA Football Odds & TV Info Read More

Posted: Friday, October 30, 2020 10:02, EDT
The clear marquee game around college football on Saturday is from the Big Ten as No. 3 Ohio State visits No. 18 Penn State. This would have been a Top-10 matchup had the Nittany Lions not lost last week. How to Bet Ohio State at Penn State NCAA Football Odds & TV Info When: Saturday, 7:30 PM ET Where: Beaver Read More

Posted: Monday, May 11, 2020 4:29, EDT
If the 2020 Heisman Trophy is given out to the player with the best first name, then Penn State running back Journey Brown should be the favorite. Here are two props available to wager at Mybookie on Brown’s Heisman Trophy chances and Penn State’s 2020 college football season – assuming there is one – and an overview. Journey Brown Heisman Read More

Posted: Friday, December 27, 2019 3:39, EST
Bowl season is drawing to a close, and while it’s sad that we are seeing the college football season come to an end in a couple of weeks, it does mean that we are getting into the bigger games. It’s easy to ignore some of the earlier bowl games, usually because they tend to feature some less than glamorous matchups, Read More

Posted: Friday, November 29, 2019 7:09, EST
Rutgers completes yet another dismal season on Saturday when the Scarlet Knights – who will have a new head coach the next time they take the field in 2020 – visit No. 10 Penn State. The Nittany Lions need a win to secure a major bowl bid. They are massive favorites on the college football lines. How to Bet Rutgers Read More

Posted: Tuesday, November 19, 2019 11:53, EST
On Saturday, the most important game in the Big Ten takes place when the 1-loss Penn State Nittany Lions face-off against undefeated Ohio State. The Buckeyes step onto Ohio Stadium’s field a -18 favorite. Will the Buckeyes lock up a spot in the Big Ten Championship with a cover win? Keep reading for the college football odds, a preview, and Read More

Posted: Wednesday, November 13, 2019 2:18, EST
Fans of college football are very often quick to jump on the playoff committee every time a new set of rankings are released. Part of the problem is that we all have out own ideas about what the top 4 should look like, ideas that don’t always fall in line with what the committee believes. The harsh reality, though, is Read More