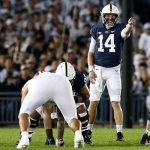 This is a critical weekend in college football for several different reasons. The teams who are on the outside looking in at the top 4 need to keep winning as the regular season runs down, as they look to impress the Playoff Committee. The first national Rankings will be released on November 2nd, so that is when we will get a true representation of how the playoffs might look and what teams need to do in the final few weeks to get in. Posted: Friday, September 23, 2016 7:55, EDT
The biggest home underdog in college football betting in Week 4 is little Texas State as the school hosts a ranked team for the first time when No. 6 Houston visits. The only chance this game is close is if the Cougars are a bit flat off a big win over Cincinnati.

No question the Cougars win obviously. The Cougars won at a good Cincinnati team 40-16 last Thursday in a game that was much closer than the final score. QB Greg Ward, who had missed the previous game ran for two fourth-quarter touchdowns, and the Cougars’ defense returned a couple of interceptions for touchdowns. Houston (3-0) trailed 16-12 early in the fourth quarter before Ward and the defense took over.Ward dispelled any worries about his arm with a 39-yard touchdown pass on the Cougars’ second series. He was 24 of 36 for 326 yards with two interceptions, and he ran 26 times for 73 yards. Ward has now thrown for at least 200 yards or rushed for 100 yards in each of the last 15 games. Ward Jr., now won 16 consecutive starts, a number which leads the NCAA. Thursday was Ward’s fifth comeback victory in the second half during his career. Houston eclipsed the 40-point mark for the second straight game as the offense totaled 500+ yards for the second straight game with 506 yards on 93 plays.The Cougars haven’t allowed any of their last five opponents to rush for 100 yards. Cincinnati managed only 30 yards rushing. Sophomore cornerback Howard Wilson intercepted two Cincinnati passes including one which he returned for his first career touchdown. The Houston defense is opposing its will to open the season, leading the nation in rushing defense at 38.3 yards per game while ranking 12th in total defense (257.7 yards per game) and 14th in scoring defense (13 points per game).Houston moved to 23-14 when ranked among the Associated Press&#39; top-10 teams. Houston improved to 8-0 when competing as the No. 6 team

Why Bet on Texas State?

The Cougars will want to get out to a big lead and get their starters out of there and re-focus on conference play. TSU (1-1) comes off a 42-3 loss at Arkansas. The Razorbacks outgained Texas State 350-26 in total yardage in the first half and held the Bobcats to 22 yards rushing on 26 carries in the game. Texas State quarterback Tyler Jones, who matched the school record with 418 yards passing in a Week 1 triple-overtime win over Ohio, finished 11-of- 26 passing for 83 yards.The Bobcats trailed 35-0 at halftime, and they didn’t reach Arkansas’ side of the field until late in the first half. Stedman Mayberry counted 34 rushing yards on 10 attempts and Elijah King finished as the Bobcats’ leading receiver with 24 yards on one reception. Bryan London made 10 stops to lead the defense, while Clarence Guidry III registered nine total tackles.Texas State is tied for national lead in red zone offense with five scores (4 TD, 1 FG) in five attempts. TSU is ranked 15th nationally in fumbles recovered with three. Texas State is in its fifth season as an NCAA Division I FBS school and fourth year as a member of the Sun Belt Conference in 2016. The Bobcats also played in the WAC during the 2012 campaign.Last season, Texas State lost at Houston 59-14. Ward Jr. accounted for six touchdowns — four passing and two running. Ward was 17 of 21 for 274 yards and led the Cougars in rushing with 91 yards on 10 carries. Jones threw for 288 yards but had two interceptions for Texas State.

Posted: Friday, September 23, 2016 7:55, EDT
The biggest home underdog in college football betting in Week 4 is little Texas State as the school hosts a ranked team for the first time when No. 6 Houston visits. The only chance this game is close is if the Cougars are a bit flat off a big win over Cincinnati. Take a Closer Look at the Houston at Texas State Read More

Posted: Monday, October 13, 2014 4:01, EDT
Here’s something unusual for betting fans. We don’t often see football being played on a Tuesday night, but that’s exactly what we get this week with a Sun Belt match-up that sees the 2-3 Louisiana-Lafayette Ragin’ Cajuns take a trip to Texas State to take on the 3-2 Bobcats. Now this may not seem as exciting or important as other Read More