NCAA Football Betting News
Described by Elite 11 head coach and ESPN analyst Trent Dilfer as a machine that goes on and on until it drops dead, Malik Zaire is one heck of a rare quarterback specimen that makes him an interesting player to watch or talk about in NCAAF betting odds. The big question on everybody’s lips is; can the Fighting Irish make it this coming season with Zaire leading the pack? We all know what sparks such a question. One factor is the absence of Everett Golson, who decided to ply his trade somewhere else, joining FSU in the offseason. Throughout last season, the two battled it out for the starting position, with Golson getting most of the starts, and Zaire being involved in the tail-end of the season.

As the biggest revelation in all these, the exit of Golson confirms one thing—Zaire  is one big competition packed in a 20-year-old’s body that even Golson feared, knowing too well it could deny him the opportunity to shine as a senior. So rather than stay and possibly play second fiddle, he opted for softer competition in Tallahassee.

Speedy Ascension to the Top 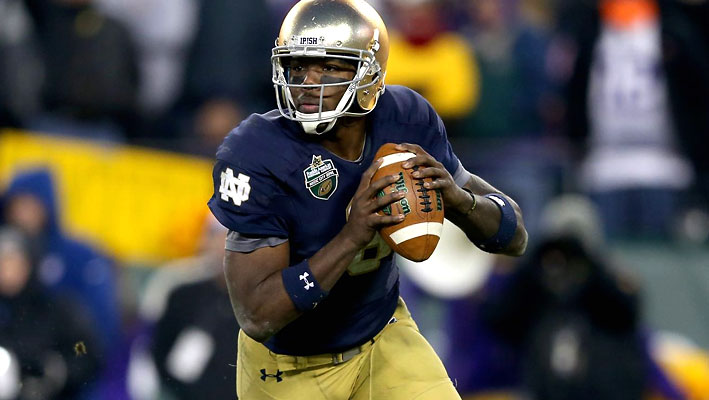 From a young man who until 2013 was not much of a voice, to a melodic sound sang by all Notre Dame fans right now, Malik Zaire must be someone really special on the field. Just the other day, he received the 2012 AP Ohio Division III Southwest District Offensive Player of the Year accolade while playing for Archbishop Alter High School, in Ohio. That season as a senior, he tallied 1,990 yards passing, 1,120 yards on the ground and 33 total touchdowns, 24 of those scores coming through the air and the remaining nine racked up on the ground. Coming out of high school, he held a four-star rating for a recruit, as per Rivals.com. In his recruiting class, he was regarded as the third best dual-threat quarterback.The 2014 season saw him debut for the Fighting Irish, as he fought for a start role. The competition between Golson and him meant his game time would be limited. His first major shot came against the Trojans, completing 9 of 20 passes for 170 yards and a rushing touchdown. The next time he started a game, he was named the MVP, and that was in the 2014 Music City Bowl, garnering 12 of 15 passes for 96 yards with one touchdown. He also ran for 96 yards on 22 carries, scoring an additional touchdown. It is his performance at the Bowl game that prompted comparisons between him and Golson, with the latter opting out of the team after sensing the impending use of Zaire as a starter in 2015

What Does Zaire Bring to the Table? 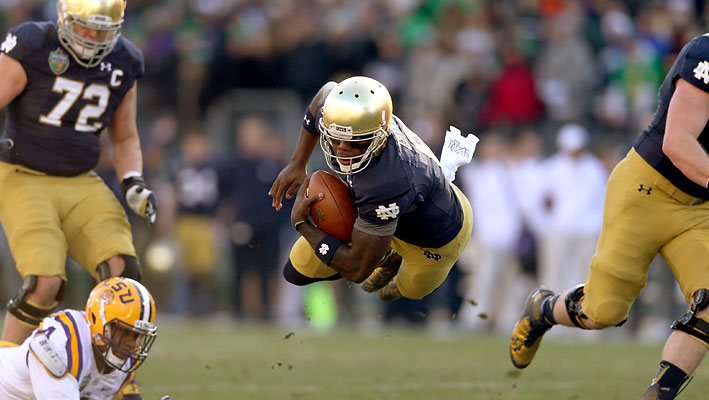 This coming season, Notre Dame will be looking to improve on a season that saw their dreams hampered by injuries and a regressing quarterback play. After a flawless 6-0 start to the season, earning them a fifth-place ranking in both the AP Poll and the Coaches Poll, they experienced an avalanche of defeats, losing five of their last six games. Zaire’s excellence in the Music City Bowl saved their punched face the shame, and with him at the center, the fans can be hopeful of more success in the new season.In the new season, the QB will be assisted by DeShone Kizer (sophomore) and Brandon Wimbush (freshman). Golson was definitely a better passer and an outstanding pre-snap decision-maker, but Zaire has it all when it comes to stable run options and making pinpoint throws on the run. His arm strength is built for big throws, with the ability to stretch the field through long bombs. At 6 feet and 225 pounds, he is also gifted with a physique that makes it easy for him to function as a running back. With such diverse skills as a dual-threat QB, he will offer a variety of options than his predecessor, encouraging more efficiency. 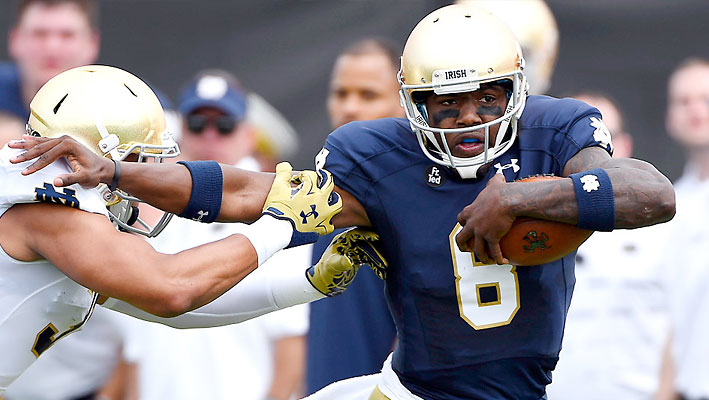 If there is someone waiting out there for Zaire to step into the lights and shine, this is it, this is the season for him to get you all caked up in the college football odds. If the Fighting Irish can keep its players healthy and fit, if the defense can hold tighten up at the back to allow more forward charge, then we could see a season where very few will be able to stop Zaire from impressing mightily.SourcesCSNchicago.com (http://www.csnchicago.com/notre-dame/notre-dame-season-preview-can-o-thrive-malik-zaire)Wikipedia.org (https://en.wikipedia.org/wiki/Malik_Zaire)
Older post
Newer post