NCAA Football Betting News
When Labor Day weekend comes, teams will be opening the 2015 college football season. In the meantime, though, some interesting stories have been spilling off college campuses. Let’s take a look at some of the most important stories that will be affecting college football betting around the nation.

The Big 12 only has ten teams right now – not enough to qualify for a championship game, and they are the only power conference not to have a title game. This is what probably kept Baylor or TCU from advancing to the College Football Playoff, as the conference ended up having a bizarre co-champions ceremony for TCU after the last game of the season – when there was still another conference game to play down in Waco. The conference’s desire to get TCU (and maybe Baylor too) some positive press going into the College Football Playoff selection became embarrassing.This year, the conference is likely to ask the NCAA for a waiver and hold a championship game anyway. But if the conference could add just two teams, it could get back to a dozen and have a game either way. While one of the more commonly cited possibilities is BYU, the fact that this team has its own network (just like the University of Texas) means that it wouldn’t be sharing as much revenue with the other teams in the conference – and expansion is just as much about money as it is about anything else. 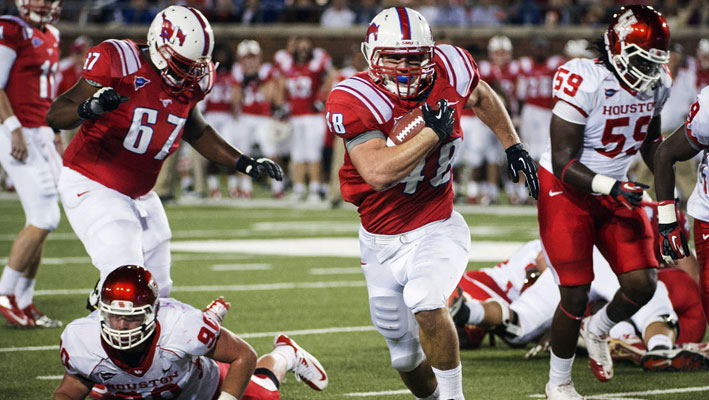 But what about SMU? It’s true that adding the Mustangs to the Big 12 would be just as much about renewing the tradition of the old Southwest Conference as anything else, but Dallas is also a huge media market. Back when SMU was regularly a contender on the national stage, they packed Texas Stadium on Saturdays. Of course, that team did unravel under a host of recruiting violations before receiving the “death penalty,” but what if they could finally return to more consistent play? June Jones coached the team to multiple bowl wins, but once his bid to move to Arizona State fell apart under mysterious circumstances, it looked like he lost the will to recruit, and SMU withered once again. The arrival of Chad Morris – the wizard behind the tremendous offense at Clemson – should mean sustained improvement at SMU. Morris has considerable ties with Texas high school coaches, so recruiting should be the best it’s been in decades. The fact that SMU already has an elite basketball program, thanks to the coaching of Larry Brown, means that SMU would contribute heavily to conference press in hoops at first. So it’s definitely something for the Big 12 to consider, especially if SMU can win five or six games in the American Athletic Conference this year. 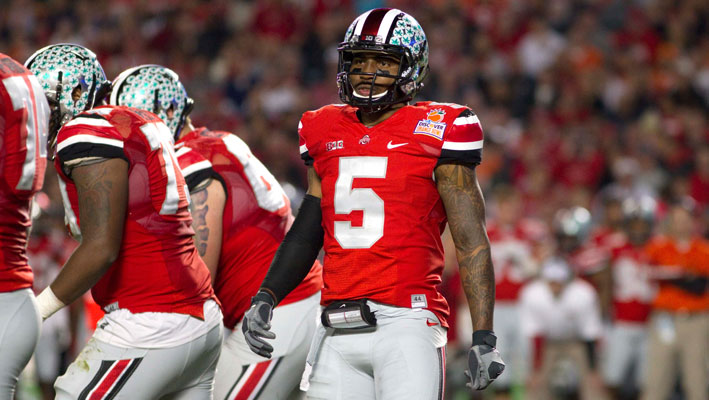 Ohio State had a huge logjam at the quarterback position, with three (Braxton Miller, J.T. Barrett and Cardale Jones) all legitimate starting prospects. While Braxton Miller did seem to be flirting with a transfer, nothing ever came to fruition there. In April, though, Braxton Miller talked about switching to wide receiver with head coach Urban Meyer, and the two of them started watching film of elite receivers together. Later in April, Miller started sneaking out to the practice field during the night with Barrett, who would throw balls to him. The plan was kept under wraps, only to be used if he couldn’t completely return to play the quarterback position after two surgeries on his shoulder. Miller announced last week that he plans to start 2015 as the H-back, a hybrid receiver spot for Ohio State. At training camp, Miller said he planned to spend about 20 percent of his time with the quarterbacks and 80 percent with the receivers. Because he will need over two more months to be a healthy quarterback, though, he’s opening the season as the H-back and a punt returner.Sources:Sports-reference.com: http://www.sports-reference.com/cfb/players/braxton-miller-1.htmlESPN.com: http://espn.go.com/college-football/story/_/id/11964789/clemson-tigers-oc-chad-morris-named-smu-mustangs-head-coach
Older post
Newer post