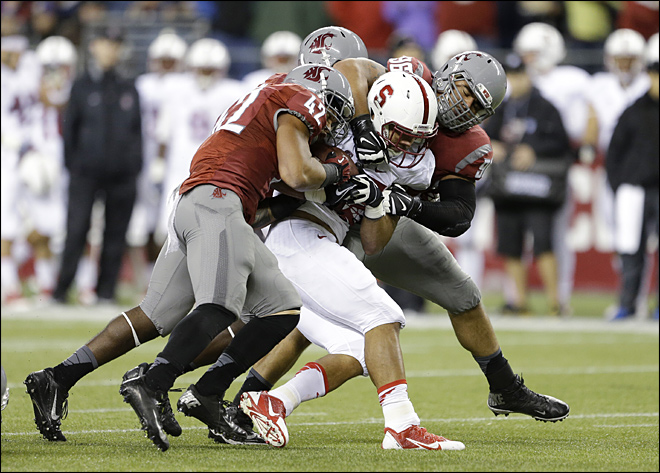 NCAA Football Betting News
There’s some great Friday night college football betting action on the plate for Week 7. The Stanford Cardinal will play host to the Washington State Cougars at the Stanford Stadium. A nationally top-ranked mean defense that has given up an average of just 8.6 points per game delineates the fact that the Cougars will not have it easy going past the Stanford.Conversely, the Cougars enviably enjoy the best passing yards in the country, averaging almost 40 points per game with a total of 523 yards per game. With a 60-59 shootout loss to California in last week’s game, saying that the Cougars have no problem scoring is an understatement for them.

Unfortunately for the Cougars, they have an ominous record over the Cardinal. Over the last six match ups between them, Washington State has zero wins against Stanford’s six victories, including a 55-17 lashing last season (September 2013).Matchup Statistics at a Glance!So, will the Cougar’s improved attack motivate them to turn the tables or will Stanford continue their great record against their counterparts? See the analysis below for a breakdown of the game and its betting odds.Betting and Game PreviewThough the Cougars lost their last game, the team and fans can draw a lot of positives from that game. For instance, Connor Halliday set an amazing FBS record with 734 passing yards with six touchdown throws and no interceptions. In fact, Halliday is ranked as the player who has reached the 3,000-yard mark faster than anyone in NCAA history, with his current tally being 3,052 yards. Another remarkable offensive performance from him should certainly give his team good opportunities to win the game. Of course, the strong Cardinal defense won’t be easy to beat, but with some resilience and constant pressure, they can be forced to make mistakes.Game Odds:WASHINGTON STATE: +17½-110STANFORD: -17½-110The major problem for the Cougars has regrettably been their defense. Their number 80-rated run defense in the league is allowing 203 yards per game. It is because of such a dismaying defense that they have not been able to shut down opposing teams and win games. If no tactical improvements are made defensively, Stanford could easily exploit the defensive deficiencies, as they’ve done repeatedly in the past.On the opposing end, Stanford needs to balance its play by scoring just as much as they work hard to give their usual splendid defensive play. By doing so, a win will almost certainly come in favor of the Cardinal. Be on the watch out a rigid defense led by corner back Alex Carter and safety Jordan Richards.PredictionDespite their good offense, the pass-happy Washington State Cougars will be thwarted by Stanford’s solid defense. Halliday will be a star-performer for the Cougars, delivering a strong play through the air. But his attacking counterparts on the opposite end of the field, led by QB Kevin Hogan, will carry the day through an emphatic ground play and the team’s well-known resolute defense. So expect Standford to win this game, but if you’re betting the college football spread, then keep an eye on Washington State.
Older post
Newer post