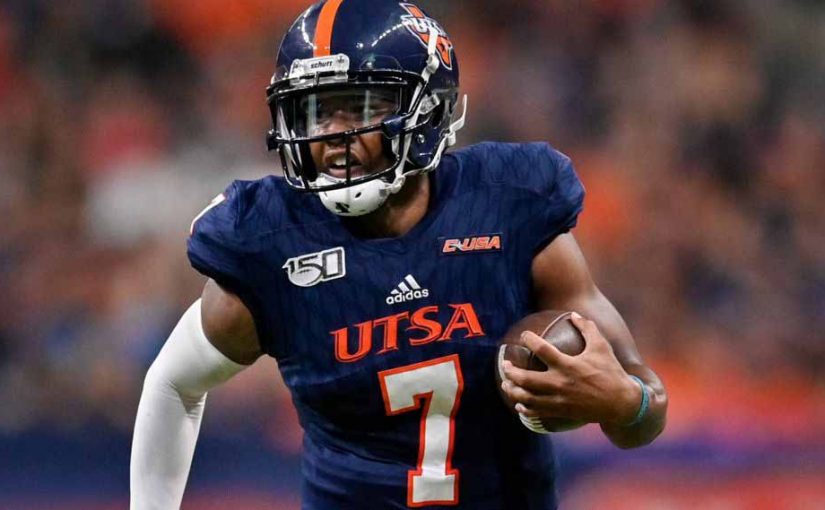 Western Kentucky lost to Texas-San Antonio (UTSA) in the regular season in a shootout, but the Hilltoppers get a chance for payback on Friday night against the Roadrunners in the Conference USA Championship Game from San Antonio. WKU is a short favorite on the NCAAF odds.

On Oct. 9, Western Kentucky lost 52-46 at home to UTSA. Frank Harris threw for 349 yards and six touchdowns and hauled in a 23-yard touchdown pass himself. Harris threw three touchdown passes to De’Corian Clark, the third on a 43-yard hook-up to give UTSA a 52-43 lead with 6:39 left. Joshua Cephus tossed a touchdown pass to Harris in the second quarter, then caught a three-yard toss for a score in the third.  Sincere McCormick carried 23 times for 120 yards while Clark pulled in seven passes for 160 yards. Bailey Zappe completed 38 of 60 pass attempts for 523 yards and five touchdowns for the Hilltoppers.

Why Bet on Western Kentucky?

WKU (8-4) closed the regular season with a 53-21 win over Marshall, its seventh straight victory. After trailing 14-0 through the game’s first 22 minutes, WKU responded by scoring 36 consecutive points. Quarterback Bailey Zappe threw for 328 yards and four touchdown passes, pushing his season total to 52 and eclipsing Brandon Doughty’s 49 in 2014, becoming the all-time single-season record holder in WKU program and Conference USA history.

WKU out-gained Marshall 485-to-325 – including a 157-to-126 advantage in rushing yards – and held the Herd to only a 3-of-14 conversion rate on third downs. The Hilltopper defense sacked Marshall four times. All seven wins during WKU’s streak have been by at least 15 points, with the average margin of victory at 26.4 points (45.3-to-18.9). The Hilltopper defense has not allowed an opponent to score over 21 points during the stretch, while the offense topped 50 points in back-to-back games to finish the regular season.

With a win, WKU would become the first C-USA football program to claim 3 title games. The Hilltoppers, ECU, FAU, UAB, UCF and Tulsa each have won 2 since the inaugural game in 2005. Since the Hilltoppers joined the league prior to the 2014 season, WKU is 12-6 against the C-USA West division in the regular season and 2-0 against such teams in the championship game.

Why Bet on UTSA?

Senior QB Frank Harris was 7 of 14 for 59 yards and rushed 10 times for 97 yards and a score. Harris rushed for a season-long 69-yard TD. He has rushed for five TDs in 2021 and 14 in his career. Sincere McCormick rushed 12 times for 60 yards. McCormick is the program’s all-time leader in rush attempts with 688. He has 3,725 career rushing yards, tops in school history and the 12th most in C-USA history.  McCormick has 1,275 rushing yards on the year, second-best in UTSA history.

UTSA has emerged as one of the highest-scoring teams in the nation this season, ranking second in Conference USA and 14th in the FBS at 36.9 points per game. The Roadrunners have topped the 30-point barrier in eight games and have surpassed 50 points twice this fall, including in the 52-46 shootout win at WKU on Oct. 9. UTSA ended up scoring 40-plus points in a four-game stretch — a program record — and is averaging 38.6 points over the last seven contests. With 443 points scored through 12 games, the Roadrunners have shattered the program’s single-season record of 379 points scored in 13 contests in 2016, and they have their sights set on taking down the points-per-game standard of 31.2 established in 12 games in 2012.

UTSA also ranks third in the FBS behind Nevada and Ohio State with five defensive touchdowns — three interception returns and a pair of fumble returns — to go along with one special teams TD this year. The Roadrunners are one of 11 FBS teams to have scored in all three phases in a single game.

Jeff Traylor is 18-6 at the helm of the Roadrunners, the best 24-game start for a UTSA coach. UTSA has won 14 of its last 16 contests dating back to last season. UTSA will make its first conference championship game appearance on Friday night. UTSA is 2-1 all-time in games played on a Friday and 3-3 in non-Saturday contests.  The Roadrunners have won a school-record nine straight home games.

Posted: Thursday, December 2, 2021 9:19, EST
Western Kentucky lost to Texas-San Antonio (UTSA) in the regular season in a shootout, but the Hilltoppers get a chance for payback on Friday night against the Roadrunners in the Conference USA Championship Game from San Antonio. WKU is a short favorite on the NCAAF odds. How to Bet Western Kentucky at UTSA NCAA Football Odds & TV Info When: Read More

Posted: Friday, December 25, 2020 6:30, EST
Both Western Kentucky of Conference USA and Georgia State of the Sun Belt Conference look to close their 2020 college football seasons on a winning note as they meet in Saturday’s LendingTree Bowl from Alabama. The Panthers are favored on the NCAAF odds. How to Bet Western Kentucky vs. Georgia State NCAA Football Odds & TV Info When: Saturday, 3:30 Read More

Posted: Friday, December 27, 2019 3:00, EST
One of the problems with wagering on bowl games is figuring out how every team is going to approach their game. Some teams view these games as more of a vacation than a day at the office, while others come in ready to go after sitting on a tough loss for a few weeks. The best games that we see Read More

Posted: Monday, December 19, 2016 1:56, EST
One bowl game on Tuesday this week and it’s from sunny Florida as Memphis of the American Athletic Conference faces Western Kentucky of Conference USA in the Boca Raton Bowl from Florida Atlantic Football Stadium. Two great offensive teams here and it has the highest total of any bowl game on the college football betting board. Memphis vs Western Kentucky Boca Read More

Posted: Tuesday, September 6, 2016 6:18, EDT
Following their crushing 52-6 victory over the USC Trojans, the defending national champs Alabama Crimson Tide will be looking for another dominant win in their Week 2 encounter against the Western Kentucky Hilltoppers. On paper, this should be a very winnable game for the Crimson Tide, who will be playing at home at the Bryant-Denny Stadium. But then again, the Read More

Posted: Monday, December 14, 2015 11:54, EST
Western Kentucky and South Florida will both look to finish their seasons with a college bowl game victory when they square off in their intriguing 2015 Miami Beach Bowl match up on Monday, Dec. 21 live from Marlins Park in Miami, Florida. South Florida head coach Willie Taggart will look to beat his alma mater and former football program after earning Read More