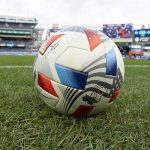 The Major League Soccer season is down to five teams. The matchup for the Western Conference Finals has been decided while the Philadelphia Union is still waiting to learn their opponent in the Eastern Conference Finals. Let’s look at the upcoming matchups and who has the best chance to be crowned MLS champion. The Major League Soccer season is down to five teams. The matchup for the Western Conference Finals has been decided while the Philadelphia Union is still waiting to learn their opponent in the Eastern Conference Finals. Let’s look at the upcoming matchups and who has the best chance to be crowned MLS champion. Let’s get right to it so you can bet against the MLS odds.

Tuesday night, the Revolution will become the final team to play its first playoff game. This year, the Revs ran away with the Eastern Conference, earning the top seed and a bye to the conference semifinals. However, they are only mild favorites against NYCFC with a +111 Moneyline, while the visitors from New York have a Moneyline of +210.

Of course, the only serious question facing New England is how the long layoff will impact Bruce Arena’s team. The Revs have two players who scored 15 or more goals in Gustavo Bou and Adam Buksa. One of the league’s rising stars in Tajon Buchanan will leave for a club in Europe in January.

However, New York City FC was one of the few teams to beat New England during the regular season, even if the Revolution won two of the three head-to-head meetings between these teams. The Pigeons also looked good when they beat Atlanta United 2-0 to reach the conference semifinals. Valentin Castellanos has been on a scoring tear late in the season, scoring seven goals in his last five games, helping him to take home the Golden Boot. He will surely give NYCFC a chance to pull off the upset on Tuesday night.

The Western Conference will come down to the fourth seed and the seventh seed. Real Salt Lake barely earned the final playoff spot on the last day of the regular season and continues to be heavy underdogs with a +255 Moneyline. Meanwhile, Portland is a heavy favorite at -111, even if it looked unlikely that the Timbers would host the Western Conference Finals at the start of the playoffs.

The Timbers handled Minnesota United at home to begin the postseason but traveled to beat Colorado on Thanksgiving Day. They also head to the Western Conference semifinals with the confidence of having beaten Real Salt Lake three times this season. Portland outscored Salt Lake a combined 12-4 in those three matches, including a 6-1 win the last time the Timbers hosted Salt Lake.

However, this is not the same RSL team that lost to Portland 3-1 in early November. The Royals won at Kansas City on Decision Day to qualify for the playoffs and then survived a penalty shootout against Seattle. They returned to Kansas City over the weekend, getting two goals from a pair of substitutes in the final 20 minutes to overcome a 1-0 deficit. This Real Salt Lake team has a flair for the dramatic and seems to find a way to win, making them a dangerous underdog against Portland and a dark horse to win the MLS Cup.

Posted: Tuesday, November 30, 2021 5:20, EST
The Major League Soccer season is down to five teams. The matchup for the Western Conference Finals has been decided while the Philadelphia Union is still waiting to learn their opponent in the Eastern Conference Finals. Let’s look at the upcoming matchups and who has the best chance to be crowned MLS champion. Let’s get right to it so you Read More

Posted: Tuesday, November 23, 2021 10:24, EST
The first four games of the MLS playoffs are in the books, but there is plenty more fun on the way. The first round of the playoffs concludes on Tuesday with two more matches, while the quarterfinals of the playoffs get underway on Thursday. Let’s take a closer look at all of the games on the horizon so you can Read More

Posted: Tuesday, November 16, 2021 10:58, EST
The Major League Soccer playoffs get underway this weekend, with four of the six first-round matchups taking place. There are two games on Saturday, and two more on Sunday, with all eight teams no doubt feeling as if they have a chance to make a run to the MLS Cup. Let’s take a closer look at the Soccer Betting Odds Read More

Posted: Tuesday, November 2, 2021 11:14, EDT
The MLS regular season is in its final days, yet there is so much left to be decided regarding the playoffs. While Sunday in the regular-season finale for the league, there are five games scheduled for either Tuesday or Wednesday of this week, most of which have playoff implications. Let’s take a look at all of the midweek MLS games Read More

Posted: Tuesday, October 26, 2021 12:21, EDT
The Major League Soccer playoff race has reached fever pitch. Every team has just three or four games left in the season and the races for the last few spots in both conferences are tight. There is a full slate of midweek games on Wednesday night that will have huge ramifications. Let’s take a closer look at the biggest games Read More

Posted: Monday, October 18, 2021 12:12, EDT
The games are coming fast and furious in Major League soccer with most teams having just five games left in the regular season. A vast majority of the playoff spots in both conferences have yet to be determined, making the games scheduled for Wednesday vital for almost every team involved. Let’s take a closer look at some of Wednesday’s MLS Read More

Top 2021 MLS Matches to Bet On: Playoffs Are Getting Closer

Posted: Wednesday, October 13, 2021 8:45, EDT
After limited Major League Soccer action last weekend during the international break, the league is back with a full slate of action this weekend. Most teams have just six games left to play this season, so this is crunch time as far as the playoffs are concerned. Let’s take a look at some of the most important games on the Read More

Posted: Wednesday, October 6, 2021 9:39, EDT
World Cup qualifying matches are taking center stage this weekend, although there are still a few Major League Soccer games on the schedule. At this stage of the season, every game is important, so let’s take a closer look at the four MLS games that fans can catch this weekend. Check out MLS odds, analysis, and free picks. Top MLS Read More

Top 2021 MLS Matches to Bet On: Colorado Rapids Looking to Get 1st Place

Posted: Wednesday, September 29, 2021 11:13, EDT
The stretch run of the Major League Soccer season is upon us, and with the international break a week away, the next two sets of games will be critical league-wide. The fun gets started with a full slate of games on Wednesday, so let’s take a look at the key matchups on the schedule along with their MLS odds. Top Read More