NBA 2022 Championship Odds & Analysis Update: Lakers and Nets Favorites to Win it All 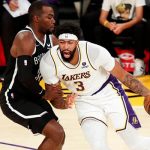 On October 19, the National Basketball Association tips off what promises to be another great season. But although the season should be fantastic, this is the NBA where drama always reigns. On Tuesday, October 12, the Brooklyn Nets said they were keeping Kyrie Irving out of practice and out of games until he became eligible, which in NBA terms, means Irving must get vaccinated.

NBA 2022 Championship Odds & Analysis Update: Lakers and Nets Favorites to Win it All

On October 19, the National Basketball Association tips off what promises to be another great season. But although the season should be fantastic, this is the NBA where drama always reigns. On Tuesday, October 12, the Brooklyn Nets said they were keeping Kyrie Irving out of practice and out of games until he became eligible, which in NBA terms, means Irving must get vaccinated. With that in mind, check out updated NBA Championship odds along with some thoughts.

Which team offers the fairest odds? The Los Angeles Lakers or the Brooklyn Nets?

Because Irving may sit out the season, it’s easy to say the Lakers offer fairer odds. Before do that, we should realize the Lakers are talented but the talent is old.

Carmelo Anthony, Rajon Rondo, and even Russell Westbrook don’t have a ton of tread left on the tires. Not only that, but LeBron and Anthony Davis have missed significant time the past couple of seasons.

So the Brooklyn Nets offer fairer odds than the Los Angeles Lakers.

Do the Warriors and Bucks offer overlay or underlay odds?

First, let’s discuss the Golden State Warriors. How has this team changed from the one that bombed in 2020-2021? If you answered not much, you’re right.

The starting five is the same as it was last season except as of October 12, both James Wiseman and Draymond Green are hurt. Golden State should offer at least +2000 to win rings.

Milwaukee returns their nucleus from last season’s championship squad. At +900, they’re the biggest overlay on the board.

Which team among the Jazz, Suns, and Nuggets offer the fairest odds to win the NBA Championship?

If the Jazz couldn’t win it last season when they had home court advantage, why would they win it this season? The Jazz don’t offer fair odds.

The Nuggets send the reigning MVP to the court. Ah, but they may have to play all 82 games without Jamal Murray. So, no, the Nuggets don’t offer fair odds, either.

The Suns return their big three, Chris Paul, DeAndre Ayton, and Devin Booker. That makes the Suns one of the teams to beat in the Western Conference, which means they’re a steal at +1600.

Is there an underdog or two that can win the 2022 NBA Finals?

One team offering +2000 odds is designed for a deep playoff run. The Miami Heat are loaded this season.

Erik Spoelstra’s squad signed Kyle Lowry to start at point guard. Lowry playing with Jimmy Butler and Bam Adebayo makes for one of the best big threes, maybe the best, in the NBA.

The Heat should offer odds comparable to Golden State’s price, not comparable to the Clippers and Sixers. The Miami Heat should be the only team in the Eastern Conference capable of challenging the Nets and Bucks, which makes them the top play based on odds to win the NBA Finals.

NBA Rumors: Ben Simmons Back For Opener? Kyrie Irving May Not Play All Season

Posted: Wednesday, October 13, 2021 10:29, EDT
It has been a very interesting week so far in the NBA with opening night next Tuesday. After saying he would not play for the Philadelphia 76ers this season, All-Star Ben Simmons caved and has reported to the team. The news isn’t as good for the Brooklyn Nets, who are +220 favorites on the NBA odds to win their first Read More

NBA Rumors: Wiggins Gets COVID Vaccine, But What About Kyrie?

Posted: Tuesday, October 5, 2021 9:33, EDT
One of the big story lines entering the 2021-22 NBA regular season is which players are vaccinated or not. Any players on the Brooklyn Nets, New York Knicks or Golden State Warriors would not be allowed to play in home games due to COVID restrictions in New York City and San Francisco without having had at least one COVID vaccine Read More

Posted: Wednesday, September 22, 2021 2:05, EDT
Believe it or not, NBA teams start reporting to training camp already next week with the regular season about a month away. However, one All-Star who will not report to camp with his current team is Philadelphia’s Ben Simmons. This was rumored all summer but it’s now official that Simmons is 100 percent done with the Sixers and is willing Read More

Posted: Wednesday, August 18, 2021 10:25, EDT
The NBA season in just two months, and the league has released the schedule for Opening Night and the marquee Christmas Day slate. To no surprise, star-laden teams like the Nets, Lakers, Bucks and Warriors populate both. The complete schedule for the league’s 75th anniversary season will be released at 3 p.m. ET on Friday. Highlights NBA Schedule 2021 Christmas Read More

Posted: Wednesday, August 4, 2021 10:18, EDT
Why do the Sacramento Kings have the longest playoff drought in the NBA? Because their front office/ownership continues to trip over itself and that has continued this offseason – especially involving guard Buddy Hield. The Kings will again be long shots on the NBA odds to reach the playoffs next year because, once again, they haven’t gotten any better. NBA Read More

Posted: Thursday, July 29, 2021 5:02, EDT
The 2021 NBA Draft is Thursday night from Brooklyn and if one is to believe the rumors, the top five picks – barring trades, of course – seem to be locked in. There’s no doubt who is going No. 1 as Oklahoma State’s Cade Cunningham is the heavy favorite on the NBA odds to be chosen first by the Detroit Read More

Posted: Monday, July 26, 2021 5:15, EDT
Now that the NBA Finals are over, the talk of the NBA is now all about the upcoming 2021 NBA Draft. With many superstar players being rumored to be on the move, we could see the most trade action we’ve ever seen on or near draft night. Check out our latest NBA Betting news update so you can get ready Read More