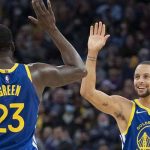 More bad news for the injury-ravaged Portland Trail Blazers: Forward Nassir Little -- one of the breakout young players in the league this season -- will likely be out for the rest of the season with a left shoulder labral tear. This is simply a lost season in Portland with Damian Lillard and Cody Zeller also out long term.

More bad news for the injury-ravaged Portland Trail Blazers: Forward Nassir Little — one of the breakout young players in the league this season — will likely be out for the rest of the season with a left shoulder labral tear. This is simply a lost season in Portland with Damian Lillard and Cody Zeller also out long term. Here’s a look at two intriguing matchups around the NBA this weekend. Check back for NBA odds.

Best NBA bets of the weekend

Tips at 7 p.m. ET. These are two of the Eastern Conference’s most disappointing teams after both made the playoffs last season – Atlanta reached the East Finals.

The teams have met once, a 110-99 Hawks home win on Nov. 17. Other than a short four-point lead early in the game for Boston, the Hawks maintained the pace, leading after every quarter. Hawks forward John Collins posted his 47th career 20-point/10-rebound double-double, tallying 20 points and 11 rebounds. Trae Young had 18 points and 11 assists. Jayson Tatum netted a game-high 34 points to goa long with nine rebounds and five assists for Boston, while Grant Williams tied his career-high with 18 points and six rebounds.

Boston comes off its best game of the season, a 128-75 destruction of Sacramento on Tuesday. It was the Celtics’ largest margin of victory at home in their 75 years of existence. Prior to Tuesday night, they had churned out only one 50-point blowout in 3,128 home games, and that was a 153-102 win over the Warriors on March 7, 1962. The 53-point rout marked the second-largest win in franchise history, falling three points shy of the 56-point victory it produced on Dec. 8, 2018, in Chicago, which came in the form of a 133-77 win over the Bulls.

Jayson Tatum scored 36 points and Jaylen Brown had 30 points and 10 rebounds before both rested the entire fourth quarter. Boston stretched its lead to 60 points before it was over. Guard Marcus Smart was scoreless in his second game back from COVID-19 protocols but did have seven assists.

Atlanta enters having won five straight games, marking the longest active winning streak in the Eastern Conference and the second-longest active winning streak in the NBA. Over those five outings, the Hawks are averaging 119.8 PPG and 27.8 APG (.500 FG%, .364 3FG%, .846 FT%). The Hawks have dished out 25-or-more assists in each contest, while shooting .500-or-better from the field in three of the five games.  Since the club’s five-game winning streak began, Atlanta’s defense is holding teams to .433 FG% (3rd-lowest). The Hawks have connected on 10-or-more three-pointers in eight straight games, tying the fifth-longest such streak in franchise history.

However, the Nets will be missing both Kevin Durant and Kyrie Irving. Durant is injured and while Irving can play in most road cities, San Francisco will not allow him to due to its vaccine mandate just like New York City. Golden State will be without Draymond Green so this really won’t look like a potential Finals meeting in June. In the seven games Irving has played in this season, Brooklyn has averaged 120.4 ppg on .513/.384/.854 shooting splits. Durant leads the league in ppg (29.3).

The teams played on Nov. 16 in Brooklyn and the Dubs won 117-99. Steph Curry had 37 points. Andrew Wiggins added 19 points for the Warriors. Durant struggled with 19 points. He shot 0 for 8 in the decisive third quarter when the Warriors outscored the Nets by 17 and finished 6 for 19 after sitting the fourth. James Harden scored 24 points for the Nets.

Posted: Thursday, January 27, 2022 9:22, EST
There are just two games on the NBA schedule Thursday and both are nationally televised by TNT and both are potential playoff previews as the Lakers visit the 76ers (that would have to be in the NBA Finals) and the Timberwolves visit the Warriors. Here are our parlay picks. Best bets for Thursday’s NBA LA Lakers at Philadelphia (-1.5) Tips Read More

Posted: Wednesday, January 26, 2022 8:11, EST
Some NBA players are simply never happy. Take Nets star James Harden. He recently complained about the officiating in saying he does not believe he is getting the benefit of the whistle the same way he did in past years. “Obviously, you can’t call all of them. But there’s ones where there’s clearly stiff-arms and trips and things like that. Read More

Posted: Tuesday, January 25, 2022 2:56, EST
Over the past few weeks, we haven’t seen much in the way of change at either end of the NBA Power Rankings. After last week’s action, there is some movement to report, which is not particularly surprising when you see that some teams are having more issues with COVID and injuries than others. Those moves are something we should probably Read More

Posted: Tuesday, January 25, 2022 1:08, EST
Although we haven’t reached the NBA’s All -Star Break, it’s a good time to consider which teams have what it takes to reach the playoffs. More than half of the league makes the playoffs. Like in 2021, the teams in seventh through tenth place must battle in the play-in tournament. As we head into February, the below are the favorites, Read More

Posted: Monday, January 24, 2022 3:20, EST
Although we have yet to hit the halfway mark of the current NBA Season, if past history is any indication, one of the teams with a top current record will win rings. The best teams in the league right now are the Phoenix Suns, Golden State Warriors, Miami Heat, and Brooklyn Nets. Unless things change, check out the perfect finals Read More

Posted: Monday, January 24, 2022 10:09, EST
The NBA race to the Finals is really starting to tighten up, especially in the Eastern Conference. Each team is jostling for position, with the Brooklyn Nets currently holding the No.1 spot. As we near the NBA All-Star break, it’ll be good to get a look at the latest NBA Championship odds. They’ve changed over the last few weeks, but Read More

Posted: Thursday, January 20, 2022 10:10, EST
The Utah Jazz have games Friday at home vs. Detroit and then a big one Sunday at Golden State, and I wouldn’t expect leading scorer Donovan Mitchell to play against the Pistons because he’s in the concussion protocol – but you know he’ll want to be out there against the Warriors in a potential playoff preview. Here’s a look at Read More