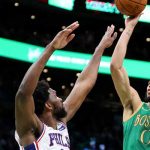 We are still relatively early in the new NBA season, and as fortunes change for every team, so do the weekly NBA Power Rankings. We are 7 weeks into the season and beginning to see some teams prove why they are among the favorites to win it all this season. On the flipside, we are seeing some of the better teams struggle a little, but whether that is a slow start, or a sign of a bigger problem remains to be seen. What you will see from this week’s rankings is that there is no change in the top 3, but there is some movement beyond there. Let’s get right into it so you can continue betting against the NBA odds.

1. Golden State Warriors – The Warriors maintain their top spot in the NBA Power Rankings with an 18-2 record on the season. They are on a run now that has seen them win 7 in a row and 9 of their last 10 games.

2. Phoenix Suns – Last season’s beaten finalists are proving that their run to the finals in 2020 was not some flash in the pan. After starting the season 1-2, the Suns have reeled off 16 straight wins and are hot on the heels of the Warriors in the West.

3. Brooklyn Nets – The standings in the Eastern Conference are about as tight as it gets, with just 2 games separating #1 through #6. It is the Nets who have the top spot in the East right now after winning 7 of their last 10.

4. Milwaukee Bucks – This time last week, the Milwaukee Bucks were sitting at #9 in the rankings, but they are on a run that is moving them upwards rather quickly. The Bucks have now won 7 in a row and are well within reach of the top spot in the East.

5. Miami Heat – In a tightly packed battle atop the Eastern Conference, the Heat are sitting in 2nd, which is enough to break them into the top 5 this week. They closed out last week with a loss, but they are still 7-3 in their last 10.

26. San Antonio Spurs – The bottom 5 is a good deal easier to rank than the top, as these teams are just losing at a ridiculous rate. The Spurs did close out last week’s action with a win, but they have just 3 wins in their last 10.

27. Detroit Pistons – The Pistons made headlines for all the wrong reasons last weekend after an on-court scuffle with Isaiah Stewart and LeBron James ended in suspensions for both players. The Pistons sit at 4-16 on the season.

28. New Orleans Pelicans – There are no teams getting excited about going 4-6 in their last 10 games, but for the Pelicans, that is a sign of progress. That is the run they are on right now and it was good enough to move them up one spot this week.

29. Orlando Magic – With the Pelicans moving up, someone has to drop, and that team would be the Orlando Magic. They delivered another winless set of games last week to take their losing streak to 6 in a row.

30. Houston Rockets – We had the Rockets picked to be at the bottom for the remainder of the season, but maybe they are about to go out and prove us wrong. The Rockets come into the new week on a modest 2-game win streak.

Posted: Wednesday, November 3, 2021 2:11, EDT
With the NBA season still little more than a couple of weeks old, we are well aware that it is much too early to be talking about the Finals and potential winners. Teams that have come out hot may well eventually go cold, while early favorites who are struggling to get a foothold may well come good as the season Read More

Posted: Wednesday, October 20, 2021 6:08, EDT
On October 19, the National Basketball Association tipped off what promises to be another great season of hoops action. The Milwaukee Bucks dominated the Brooklyn Nets 127-104 and the Los Angeles Lakers fell to the Golden State Warriors 121-114. From those two games to April 10, teams will fight to win their respective conferences. Check out information on both conferences Read More

NBA 2021 Season Opening Week Matches to Must Bet On

Posted: Monday, October 18, 2021 6:08, EDT
The NBA turns 75 years old this season, so expect some hoopla when the new season begins on Tuesday night, October 19. Last season is going to be a tough act to follow, as it delivered a ton of surprises, with the season ending in a Milwaukee Bucks title. The Bucks will, of course, come into the season with a Read More

Posted: Thursday, June 24, 2021 5:35, EDT
Now that we’ve made it to the Conference Finals, the betting public is ready to wager on who they think will end up in the NBA Finals.  Out West, we have a team that is on fire, while their opponent wasted a great opportunity in the last game. In the East, we had a very surprising outcome in Game 1 Read More

Posted: Thursday, June 17, 2021 12:54, EDT
What a difference a day makes! On Tuesday, the Clippers were coming off of a big victory over the Utah Jazz to even the series at two games apiece. The Phoenix Suns were waiting in the wings for the winner of the Utah-Los Angeles series, coming off of a sweep over Denver. On Wednesday morning, it was announced that Kawhi Read More

Bucks in the 2019 NBA Playoffs

The Milwaukee Bucks have experienced one of their best seasons as a franchise. The Bucks were ranked as the number one team in the Eastern Conference, with a total of 60 games under their belt. The Buck’s current win percentage is .732, which is one of the highest that it’s been in years. The Greak Freak "Giannis Atetokounmpo" has been the MVP for both the Bucks and the entire leauge winning the coveted award.