NBA News and Rumors
The Toronto Raptors worked hard in the regular season to earn home court advantage going into the playoff, but that has all been wiped out by losing both games at home to the Washington Wizards. The Wizards appear to have found their great form from earlier in the year, and were great NBA betting value for both of their wins on the road.

Date: Friday, April 24, 2015Time: 8:00PMVenue: Verizon CenterOpening Line: Washington -3.5For the Raptors to be successful, they are going to need Kyle Lowry going at full speed. The problem there is that he has had back issues going back several weeks, and then had to leave Game 2 with a shin injury. While Lowry has struggled, the bench has done a good job of stepping up, with Lou Williams being particularly effective. Jonas Valanciunas and DeMar DeRozan have also been playing their part, but without Lowry acting as the cog, this is a team wheel that really doesn’t spin all that well. One of the biggest issues that the Raptors have faced during the first two games of the series has been their inability to slow down John Wall. If they cannot find a way to stop the big man, this is a series that could be over very, very quickly. 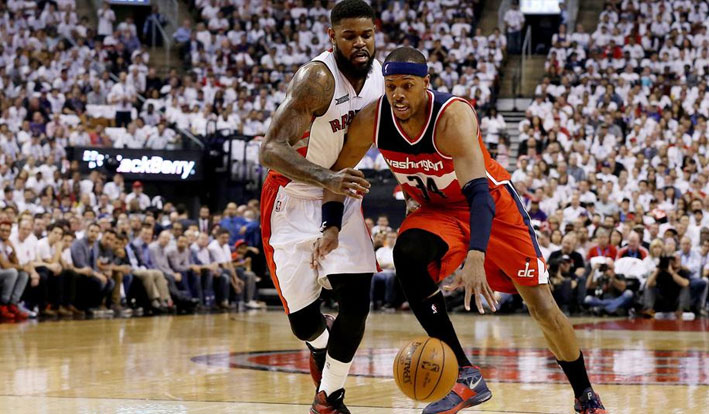 While the Raptors are forced to rely on the offensive power of Kyle Lowry, the Wizards have shown that they have the ability to do damage on a number of different fronts. Paul Pierce put on a show in Game 1, but when he faltered in Game 2, it was Bradley Beal who stepped up. John Wall was also sensational in Game 2, logging 40 minutes en route to 26 points and 17 assists. Otto Porter was also able to chip in 15 points off the bench, and it is that depth that could propel the Wizards forward against a Toronto team that looks as though it is lacking the guts to put up any sort of fight. Winning both games on the road puts the Wizards in a pretty enviable position, and you can bet that they will be doing all they can to complete the sweep at home.

The Raptors are well aware of the trouble that they are in right now, so expect them to come out swinging a little in Game 3. That said, if they prove to be as ineffective on offense as they have been over the opening 2 games, the fight may go out of them pretty quickly. I like the Wizards to win here and build a 3-0 lead.
Older post
Newer post