NCAA Basketball Betting News
When third-seeded Notre Dame battles top-seeded Kentucky in their Elite Eight matchup on Thursday night, one major question is all that needs to be answered.Can the sweet-shooting Fighting Irish handle the high-flying, undefeated Wildcats and pull off the upset in a NCAAB odds matchup that will feature two totally differing styles of play?Let’s find out.No.3 Notre Dame vs. No. 1 KentuckyWhen: 8:49 PM ET, Saturday, March 28, 2015Where: Quicken Loans Arena, Cleveland, OhioOdds: Kentucky -11Over/Under: 137 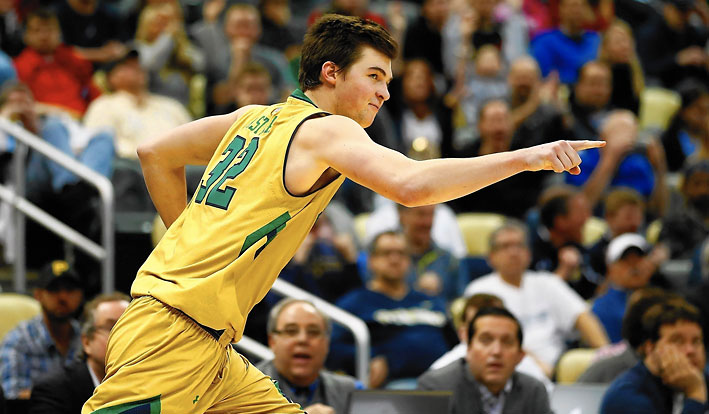 Notre Dame wouldn’t let up in its convincing 81-70 win over Wichita State in the Sweet 16. Sophomore point guard Demetrius Jackson scored a team-high 20 points on 7-of-10 shooting as the third-seeded Fighting Irish got hot in the second half to pull away from the Shockers and cash in as a 2-point favorite.Three other Notre Dame players also reached double digits in scoring with Pat Connaughton scoring 16 points and both Steve Vasturia and Zach Auguste adding 15 points. The Fighting Irish limited Wichita State to just 3-of-18 shooting from three-point distance while draining 9-of-19 of their own attempts from beyond the arc,

Now, the only thing standing between Kentucky and the @FinalFour is Notre Dame: http://t.co/VRqzPZBFxg pic.twitter.com/yCPv9DXKo6

Notre Dame shot an incendiary 18-of-24 from the field in the second half and improved to an insane 29-0 when shooting a higher field goal percentage than their opponent and an unblemished 19-0 when scoring at least 80 points.

The Wildcats absolutely embarrassed West Virginia in its 78-39 Sweet 16 beat-down of the Mountaineers on Thursday.The Wildcats got a team-high 14 points from 6-10 forward Trey Lyles and placed five players in double figures in scoring while holding West Virginia to a dismal 24.1 percent shooting mark from the field (13-of-54) and abysmal 13.3 percent mark from beyond the arc (2-of-15). Lyles added seven rebounds while center Willie Cauley-Stein added eight points, 10 rebounds and three blocks in the win. 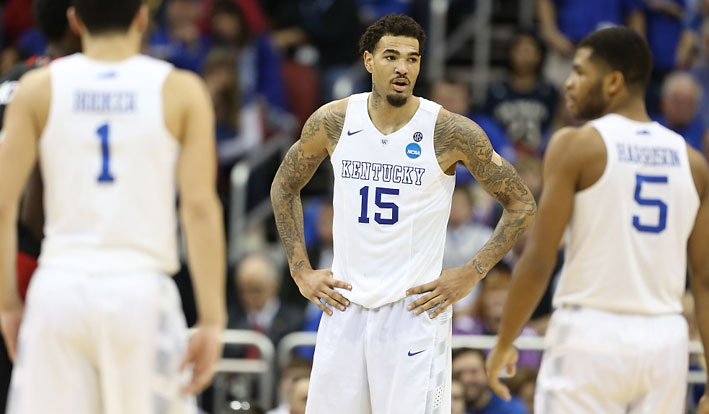 Kentucky easily cashed in as a 13.5-point favorite to snap a modest two-game ATS skid and improve to 2-2-1 ATS over their last five games.

As much as I’d like to pick the Notre Dame Fighting Irish to pull off the biggest upset this season, I just don’t see it happening, although I’m pretty sure the Irish will make it a closer affair than the oddsmakers apparently think.Notre Dame has gone 6-2 ATS in their last eight games against a team with a winning SU record while also going 5-2 ATS in their last 7 neutral site games. 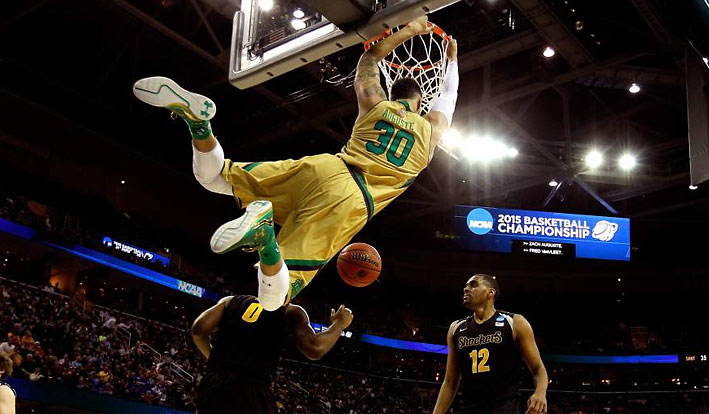