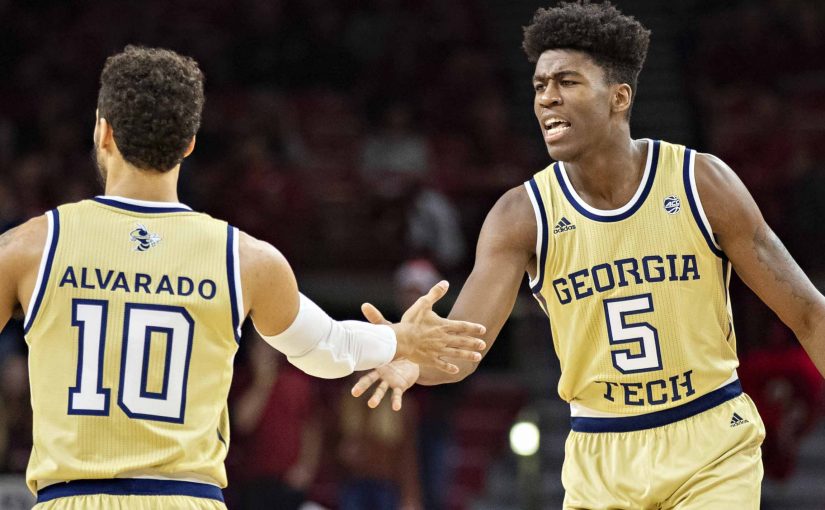 Georgia Tech is the defending champion of the ACC Tournament, but the Yellow Jackets struggled this season and are major long shots to win the event as they tip things off Tuesday against Louisville from Brooklyn.

Let’s take a look at how the Georgia Tech vs Louisville teams are coming in to place your college basketball bets.

The schools met once in the regular season, a 67-64 Louisville win on Jan. 2 in Atlanta. Malik Williams made 9 of 12 from the field and finished with 20 points and 10 rebounds. Matt Cross had 13 points and nine rebounds, Dre Davis also scored 13 points — all in the second half — and Noah Locke added 10 points for Louisville. Kyle Sturdivant made a basket in the paint to give the Yellow Jackets a 49-45 lead with 11 minutes to play but they went scoreless for nearly 5 minutes and missed seven consecutive field-goal attempts as Louisville scored 10 straight points. Michael Devoe led Tech with 23 points.

Louisville has a 24-14 series advantage over Georgia Tech and the Cardinals have won 11 of the last 12 meetings.

Why Bet on Georgia Tech?

Defending ACC Tournament champion Georgia Tech (12-19) is the No. 14 seed. Tech closed the regular season Saturday with an 82-78 OT win over Boston College. In their final home game, Georgia Tech seniors Jordan Usher and Michael Devoe combined for 48 points – including 11 of Tech’s 12 points in overtime.

Usher scored a game-high 30 points and Devoe added 18 for the Yellow Jackets, who also got 16 points from freshman Miles Kelly. The senior duo of Usher and Devoe was especially pivotal in overtime, as Usher scored six and Devoe had five in the extra period to lift Georgia Tech to the season sweep over Boston College.

Tech improved to 3-7 this season in games decided by five points or fewer (does not count a 72-62 overtime win vs. Georgia State). Four other ACC losses have come by 10 points or fewer. Five of Tech’s last six games have been decided by six points or fewer. Tech posted its highest field goal percentage of the season (56.5 pct.), as well as its highest three-point success rate (42.9 pct.), in an ACC game. The Jackets’ only other 50-percent shooting game against an ACC team came at Boston College on Jan. 12.

Georgia Tech has played in 41 ACC Tournaments, and has a 28-37 all-time record in the event. Georgia Tech and Louisville are meeting in the ACC Tournament for the first time, leaving Syracuse as the only league member the Yellow Jackets have never faced in the tournament.

Why Bet on Louisville?

The Cardinals (12-18) lost their fourth straight game Saturday, 71-61 at home vs. Virginia. The Wahoos led by 19 at the half. Louisville started the second half on a 12-3 run with 3-pointers by Mason Faulkner and Noah Locke. The Cardinals got within single digits when Locke hit a 3-pointer and Sydney Curry scored the next six points in a 9-0 run to trail 58-50 with six minutes remaining but didn’t get closer than seven thereafter.

Curry recorded the third double-double of his Louisville career with 24 points and a season-high 14 rebounds, leading the Cardinals in both categories on Saturday. He also recorded double-doubles vs. NC State on Jan. 12 and at Virginia Tech on Mar. 1. Saturday marked the third straight game that Curry has led the team in both points and rebounds. He has now led the Cardinals in scoring five times this season, including each of the last three games. Curry has averaged 23.3 points and 10.7 rebounds in his last three games while shooting 69.8 percent from the field (30-of-43).

El Ellis, who was tied for the runner-up position in ACC Sixth Man of the Year voting, has scored in double figures in six of the last 10 games, including a career-high 25 in the Feb. 1 meeting against North Carolina. He is averaging 10.4 points per game over the last 17 games — top for the Cardinals in that stretch, while hitting 28-of-75 threes (.373), including 11.8 ppg in the last 10 games.

Louisville does not have a double-figure scorer on its team, but has 10 players averaging between 4.7 and 9.5 points per game.  The last time UofL finished the season without a double figure scorer was 1943-44.

Louisville will be participating in its sixth Atlantic Coast Conference Tournament this week, entering with a 2-5 record in five previous appearances.  This is the first time the Cardinals have been a No. 11 seed in the ACC Tournament.

Posted: Tuesday, March 8, 2022 9:49, EST
Georgia Tech is the defending champion of the ACC Tournament, but the Yellow Jackets struggled this season and are major long shots to win the event as they tip things off Tuesday against Louisville from Brooklyn. Let’s take a look at how the Georgia Tech vs Louisville teams are coming in to place your college basketball bets. How to Bet … click title for full article.

Posted: Friday, December 10, 2021 9:06, EST
There is no college football action this Friday and the only major NCAA game on the slate in basketball features DePaul of the Big East visiting Louisville of the ACC in an intriguing matchup. The Cards are favored on the NCAAB odds. How to Bet DePaul at Louisville NCAA Basketball Odds & TV Info When: Friday, 8 PM ET Where: … click title for full article.

Posted: Tuesday, March 2, 2021 9:09, EST
Both Louisville and No. 22 Virginia Tech will be NCAA Tournament teams, but they also can still possibly win the ACC regular-season title – although the loser Wednesday can’t. The Hokies will be favored on the NCAAB odds. They are +10000 to win the national title and the Cards +6600. Louisville at Virginia Tech NCAA Basketball Odds & TV Info … click title for full article.

Posted: Monday, February 24, 2020 2:04, EST
Two top 10 teams with legitimate national championship hopes will be going all out to get the victory when the eighth-ranked Florida State Seminoles host the 11th-ranked Louisville Cardinals in their ACC showdown on Monday night. With both ballclubs looking to make a statement in this matchup, let’s find out which team is offering the best value against their NCAAB … click title for full article.

Posted: Wednesday, February 19, 2020 4:05, EST
While the teams on the bubble in the race for a spot in the tournament must really be beginning to feel the heat, the teams who are guaranteed a spot are thinking about getting into a groove and building some momentum ahead of the playoffs. We are now down to the final couple of weeks of the college basketball regular … click title for full article.

Posted: Wednesday, February 5, 2020 3:28, EST
A big part of wagering on sports is the ability to look at the current state of affairs and predict how things might play out in the future. Bettors who win regularly have a fantastic knack for doing that, but even they are having a tough time figuring out who will land on top of the college basketball rankings at … click title for full article.

Posted: Wednesday, January 22, 2020 9:24, EST
Could be a bit of letdown game for No. 6 Louisville on Wednesday as the Cardinals host unranked Georgia Tech. Off a big win over Duke, the Louisville players could be excused for coming out a bit flat. Louisville is a sizable Mybookie NCAAB Betting favorite, though. How to Bet Georgia Tech at Louisville NCAA Basketball Odds & TV Info … click title for full article.