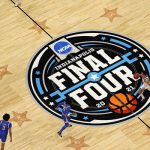 The 2021-22 College Basketball Season is underway, and we’ve already seen some great action! Some of the nation’s top teams have separated themselves early on from the rest of the field. Here are some early season NCAA Basketball National Championship Betting predictions for some teams that are capable of winning the Championship. No. 11 seed UCLA already eliminated Michigan State in the 2021 NCAA Tournament, and now the Bruins look to upset No. 1 Michigan as well as the teams meet in the East Region title game on Tuesday for a spot in the Final Four. The Wolverines are solid favorites on the NCAAB odds.

The Bruins (21-9) probably should have lost in the First Four to Michigan State but rallied to win in overtime and now are on the precipice of the Final Four. They upset SEC champion and No. 2 seed Alabama 88-78 in the Sweet 16 despite the Tide hitting a long three-pointer at the regulation buzzer to send it to OT.

UCLA scored the first five points in overtime and never looked back. The Bruins outscored Alabama by a 23-13 margin in the five-point overtime session. Six Bruins scored in double figures for the first time this season. Jules Bernard and Jaime Jaquez Jr. each had 17 points, while Johnny Juzang (who fouled out) and Tyger Campbell had 13 points. Cody Riley finished with 10 points, five rebounds and four blocks. David Singleton made 3 of 4 attempts from 3-point range and tallied 15 points off the bench.

Freshman Jaylen Clark tallied a team-best nine rebounds in just over 18 minutes off the bench. Clark had a team-leading four offensive rebounds and also scored three points (all on free throws). Three of UCLA’s four wins have been by double digits. Juzang is averaging 20.0 ppg in this tournament.

Nate Oats’ squad has been in the top three in adjusted defensive efficiency on KenPom all season, yet UCLA recorded 111 points per 100 possessions against Alabama. In addition, the Tide went 11-for-25 from the foul line, including a stretch at the end of regulation and beginning of overtime when they missed six of seven from the stripe. It was the worst free throw performance (minimum of 25 attempts) in the NCAA tournament since Kansas went 12-for-30 in the 2003 national championship game against Syracuse.

UCLA is in the Elite Eight for the first time since advancing to three consecutive Final Fours in 2006, 2007 and 2008. In addition, this marks the first Elite Eight berth for Coach Cronin, now in his second season at UCLA. The Bruins are the second First Four team to advance to the Elite Eight — and the first since VCU went to the Final Four in 2011.

Michigan (23-4) has won all three of its games by double digits in this Big Dance after a 76-58 rout of No. 4 Florida State on Sunday. Noles coach Leonard Hamilton admitted that the Wolverines presented a unique set of problems with 7-foot-1 center Hunter Dickinson operating in the post.

“This team executed so well,” Hamilton said. “Their spacing was unbelievable. They were extremely patient. We had a hard time turning them over. They really, really played off of their big guy. We spent so much time trying to defend Hunter, and they get to their perimeter shooters when the clock would run down to about 10 seconds left on the shot clock. They continue to keep staying in their system and they executed and made plays right toward the end. That’s what a good team will do.”

The anticipated offensive slide without injured standout Isaiah Livers has not arrived. Here are Michigan’s points per 100 possessions in its three wins: 114 (Texas Southern), 119 (LSU) and 112 (Florida State). All of that without the services of a player averaging 13.1 PPG and connecting on 43% of his 3-point attempts. Livers is not expected back Tuesday or perhaps at all in this tournament.

The winner of this game will face the winner of Tuesday’s first game, the West region final between No. 1 Gonzaga and No. 6 USC, on Saturday for a spot in the national title game on April 5.Game TrendsExpert Prediction

Posted: Tuesday, March 30, 2021 5:50, EDT
No. 11 seed UCLA already eliminated Michigan State in the 2021 NCAA Tournament, and now the Bruins look to upset No. 1 Michigan as well as the teams meet in the East Region title game on Tuesday for a spot in the Final Four. The Wolverines are solid favorites on the NCAAB odds. How to Bet UCLA vs. Michigan NCAA Read More

Posted: Friday, March 26, 2021 9:10, EDT
The marquee matchup of the four Sweet 16 NCAA Tournament games on Sunday is from the East Region as No. 1 Michigan of the Big Ten faces No. 4 Florida State of the ACC, with the Wolverines as 3-point favorites on the NCAAB odds. How to Bet Florida State vs. Michigan NCAA Basketball Odds & TV Info When: Sunday, 5 Read More

Posted: Monday, March 22, 2021 1:12, EDT
East Region top-seeded Michigan of the Big Ten is on definite upset alert Monday as the Wolverines remain without one of their best players in injured senior Isaiah Livers when they take on eighth-seeded LSU on Monday in the second round of the NCAA Tournament. Michigan is favored on the NCAAB odds. How to Bet LSU vs. Michigan NCAA Basketball Read More

Posted: Thursday, March 4, 2021 7:58, EST
Off one of the most shocking losses in school history, second-ranked Michigan looks to bounce back against rival Michigan State on Thursday. The Wolverines, who clinch the Big Ten regular-season title with a victory, are double-digit favorites on the NCAAB odds and are +425 to win the national title. The Spartans are +6500. How to Bet Michigan State at Michigan Read More

Posted: Monday, March 1, 2021 10:55, EST
Huge game from the Big Ten on Tuesday as No. 3 Michigan would clinch the Big Ten regular-season title with a win over No. 5 Illinois – those rankings could change a bit later Monday. The Wolverines will be favored on the NCAAB odds. They are +400 to win the national title and Illinois +2000. How to Bet Illinois at Read More

Posted: Wednesday, February 24, 2021 8:47, EST
No question that one of the marquee matchups in college basketball this week is Thursday from the Big Ten as No. 9 Iowa visits No. 3 Michigan. The Wolverines control their destiny to win the Big Ten regular-season title and earn a top seed in the Big Dance. UM is +875 on the NCAAB odds to win it all and Read More

Posted: Wednesday, February 17, 2021 9:39, EST
It was almost easy to forget about No. 3 Michigan in terms of favorites to win the 2021 NCAA Tournament because the Wolverines hadn’t played in so long due to COVID protocols. They are back and look as good as ever and will be double-digit NCAAB favorites on Thursday against Rutgers in Big Ten action. How to Bet Rutgers at Read More

Posted: Thursday, January 21, 2021 7:55, EST
Seventh-ranked Michigan leads the Big Ten standings, but the last time the Wolverines visited a dangerous team they were thumped. Could an upset happen again Friday at Purdue? Michigan will be favored on the NCAAB odds. How to Bet Michigan at Purdue NCAA Basketball Odds & TV Info When: Friday, 7 PM ET Where: Mackey Arena TV: Fox Sports 1 Read More

Posted: Monday, January 18, 2021 4:37, EST
Even though Michigan suffered its first loss of the season Saturday in a blowout at Minnesota, the Wolverines stayed at No. 7 in the Associated Press Top 25. They return home Tuesday to host Big Ten rival Maryland, and Michigan will be favored on the NCAAB odds. How to Bet Maryland at Michigan NCAA Basketball Odds & TV Info When: Read More