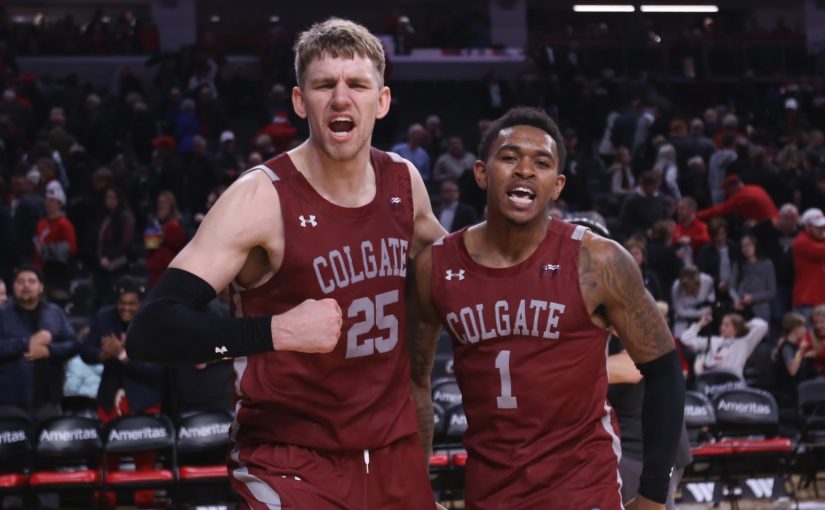 Both Navy and Colgate are very good teams, but only one of the two is going to make the NCAA Tournament as they face off Wednesday night in the Patriot League Tournament championship game. Colgate is a solid favorite on the NCAAB odds.

Colgate was 2-0 vs. Navy this season. They last played on Feb. 26 at Colgate and the Raiders won 74-69. Tucker Richardson had 23 points and Nelly Cummings had 15. John Carter Jr. had 17 points and six rebounds for the Midshipmen. The two teams already locked in the top two seeds for the Patriot League tournament. The Raiders tied the Patriot League record for most conference wins in a season with 16; Bucknell was the only other team to do it in 2017-18.

Why Bet on Navy?

Navy (21-10) advanced to the final with an 85-80 OT win over Boston University on Sunday. It featured 11 ties and 16 lead changes.  There were eight ties and 10 lead changes in the last 12 minutes of regulation, with another one tie and two lead changes in overtime.

Up 83-80, Navy inbounded the ball and the Terriers tried to get a steal before fouling Sean Yoder with 12.3 seconds left.  He made both attempts to account for the final points in the game. Greg Summers and John Carter Jr. scored 21 points apiece to lead the Middies. The 21 points tied a career high for Summers, who added six rebounds. Carter also had six rebounds.

Most shooting statistics between the teams were fairly even in terms of percentages and makes, but Navy was 20-25 from the foul line in contrast to the 16-20 effort by Boston. Navy did hold some significant statistical advantages in rebounds, 42-32; offensive rebounds, 14-9; second-chance points, 13-5; and bench points, 43-13.

“Just a great basketball game,” said Navy head coach Ed DeChellis.  “Really good game, back and forth, high level.  The seniors (for both teams) really shined.  This is the way it is supposed to be in March. The seniors stepped up and made plays.”

Navy is the No. 2 seed in the tournament for the sixth time and the first since 2008 (the Mids were the No. 1 seed last season). Navy and Colgate are the only two teams to not appear in a first-round Patriot League tournament game over the last six years (2017-22).

Richard Njoku and Summers each were named to the Patriot League All-Defensive Team. Njoku earned the honor for the second year in a row and Summers appeared on the team for the first time. Njoku joins Bryce Dulin (2017, ‘18) as Mids to be named to the team twice since it was first established for the 2015-16 season.

Navy began Patriot League play by having its first five games decided by at least 11 points. Since then, 12 of the team’s last 14 games have been decided by no more than 10 points, with eight of them decided by no more than five points. Navy’s defense has been one of the keys to the team’s success this season. The Mids currently rank fifth nationally in scoring defense. Navy has held 22 of its last 26 Division I opponents to a point total lower than the season average they had posted entering the game.

Why Bet on Colgate?

Colgate (22-11) was the Patriot League regular-season champion and advance to the tournament final for the fifth straight year with an 81-61 win over Lehigh on Sunday, the Raiders’ 14th straight victory – tied for the longest in school history.

Jack Ferguson for the second consecutive game led the Raiders in scoring. After connecting on 7-of-8 from behind the arc in the quarterfinal game, the senior guard was 4-of-5 vs. Lehigh on his way to 17 points. He finished with five rebounds and drew six personal fouls.

“Anything can happen on any given day so that’s what you want for your team when the season starts – to compete for a regular season championship and play in the conference tournament with a chance to go to the NCAA tournament. That’s what our guys have worked so hard for over a long haul of time. I’m excited for them and look forward to the opportunity to play at home on Wednesday night,” Colgate coach Matt Langel said.

Richardson and Nelly Cummings both earned All-Patriot League First Team distinction while Records brought home All-League Third Team honors. Richardson also earned All-Defensive Team honors for the first time in his career. Richardson and Cummings lead Colgate’s veteran-laden backcourt as two of the team’s three 1,000-point scorers this season. The two seniors are the top two leading scorers on the team and have combined for 11 games with 20 points or more.

Richardson became Colgate’s first player to record 1,000 career points, 500 career rebounds, and 400 career assists. Records leads the Patriot League in field goal percentage (64.3) and blocks per game (1.7), on pace to be the first Raider to lead the League in blocks per game since Alex Woodhouse in 2008-09.

Colgate is 14-1 at home this season and 22-2 in Hamilton over the last two seasons. The Raiders have won nearly 90% of their home games since 2017. Colgate is 19-0 this season when its opponent scores less than 70 points and 3-11 when the opponent reaches the 70-point plateau.

Posted: Wednesday, March 9, 2022 10:44, EST
Both Navy and Colgate are very good teams, but only one of the two is going to make the NCAA Tournament as they face off Wednesday night in the Patriot League Tournament championship game. Colgate is a solid favorite on the NCAAB odds. How to Bet Navy vs. Colgate NCAA Basketball Odds & TV Info When: Wednesday, 7:30 PM ET … click title for full article.