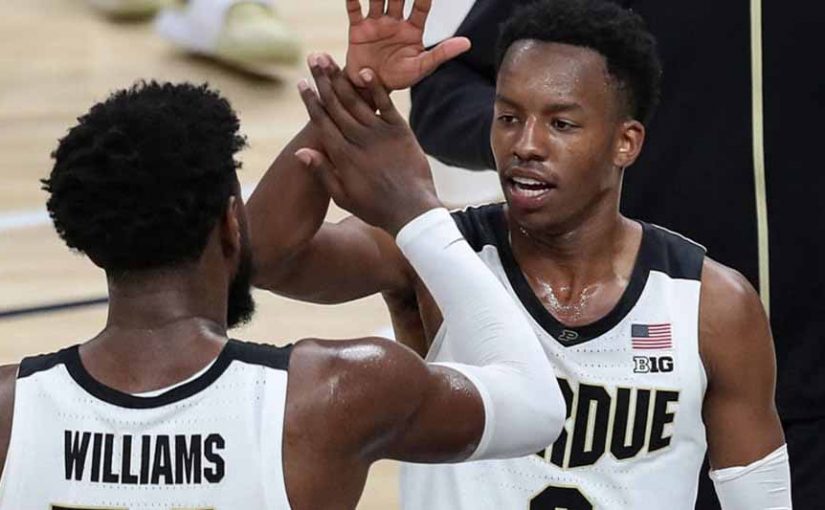 Northwestern has made the NCAA Tournament just once in its history and the Wildcats aren’t doing so this year most likely. They can play Big Ten spoilers, though, on Wednesday against No. 5 Purdue, which is a solid favorite on the NCAAB odds.

They schools met Jan. 23 at Purdue and the Boilermakers rolled 80-60. Sasha Stefanovic scored 22 points to lead the way. Purdue has won 10 straight in the series, turning away Northwestern once again despite playing without leading scorer Jaden Ivey because of an injured hip flexor. Trevion Williams and Zach Edey had 12 points apiece. The Wildcats were led by Boo Buie with 17 points. Pete Nance and Robbie Beran each scored nine for Northwestern, which cut a double-digit deficit to five when it opened the second half with seven straight points, but Purdue eventually went on a 16-5 run to open a 64-47 lead with 8:03 to play.

Purdue (22-4) probably should have lost Sunday at home to Maryland but escaped 62-61. Trevion Williams rejected a layup try by Donta Scott in the final seconds. Scott drove hard to the basket from the right baseline, but Williams blocked the shot with five seconds left. The Boilermakers corralled the loose ball, completing a rally from a 12-point deficit midway through the second half.

“I thought we deserved to win, in the clip I saw from one of our guys on the staff, I thought Donta got fouled,” Maryland interim coach Danny Manning said.

Purdue’s 62 points mark a season-low point total in a win this season. The Boilermakers are now 1-4 when scoring less than 70 points this season. Purdue is 21-1 when shooting a higher field goal percentage than its opponent. Purdue has won 15 straight games when wearing its gold uniforms (last loss: Jan. 1, 2017).

A win would give Purdue a 23-4 record, matching Purdue’s best 27-game start since the 1987-88 season (done five other times). Wednesday’s game marks an end of a stretch where Purdue will have played eight games in 21 days. Purdue will have traveled or been on the road for 10 of the last 21 days. The Boilermakers are 6-1 in that stretch with three quad-1 victories (Iowa, Ohio State, Illinois).

Why Bet on Northwestern?

NU was stout defensively, finishing with 12 steals. Its highest mark in a Big Ten conference game since March 8, 2012 (12 steals vs. Minnesota). In total, the Wildcat defense forced 20 Illini turnovers. The Wildcat defense stepped up especially in the second half, limiting the Illini to 8-of-24 shooting from the field (1-of-13 from three), while forcing 14 turnovers. A 19-2 run midway through the second half over a five-minute stretch cut an 18-point deficit to one.

Ty Berry led the way for the Wildcats with 16 points on 5-of-8 shooting, connecting on his first four threes. Berry’s 16 points are the second most points he has scored against a Big Ten opponent in his career. Chase Audige finished with 12 points, a team-high seven rebounds, a team-leading three assists, and two steals.

Northwestern ranks fifth in the Big Ten averaging 8.2 made threes per game. When the Cats convert on eight or more 3-point attempts, they are 9-5 this season. Boo Buie’s made a team-best 51 treys this season with Nance leading the squad hitting 41.4% of his long range attempts. NU is second nationally in assist turnover ratio (1.85).

Posted: Wednesday, February 16, 2022 8:51, EST
Northwestern has made the NCAA Tournament just once in its history and the Wildcats aren’t doing so this year most likely. They can play Big Ten spoilers, though, on Wednesday against No. 5 Purdue, which is a solid favorite on the NCAAB odds. How to Bet Purdue at Northwestern NCAA Basketball Odds & TV Info When: Wednesday, 9 PM ET … click title for full article.

Posted: Monday, February 15, 2021 11:20, EST
No. 6 Illinois is battling for the Big Ten regular-season title and could be in position for a No. 1 seed in the NCAA Tournament. The Illini will be heavy home favorites on the NCAAB odds over a struggling Northwestern side on Tuesday as Illinois goes for the season sweep. How to Bet Northwestern at Illinois NCAA Basketball Odds & … click title for full article.

Posted: Tuesday, January 19, 2021 9:38, EST
Wisconsin is a game back of the Big Ten lead held by Iowa and Michigan, and the No. 10 Badgers will be solid favorites on the NCAAB odds when they host a mediocre Northwestern side on Wednesday. How to Bet Northwestern at Wisconsin NCAA Basketball Odds & TV Info When: Wednesday, 9 PM ET Where: Kohl Center, Madison TV: Big … click title for full article.

Posted: Wednesday, January 6, 2021 8:49, EST
The Northwestern Wildcats are in the midst of a murderous stretch of schedule as the formerly ranked Wildcats look to end a two-game slide when they host rival and No. 12 Illinois on Thursday. The Illini will be favored on the NCAAB odds. How to Bet Illinois at Northwestern NCAA Basketball Odds & TV Info When: Thursday, 9 PM ET … click title for full article.

Posted: Wednesday, March 13, 2019 11:13, EDT
Northwestern and Illinois throw down on Wednesday in the Big Ten Tournament’s first round. The Illini, because the tournament takes place in Chicago, is a slight -2 favorite. Will under .500 Illinois win the first game in their conference tournament, or will Northwestern upset the Fighting Illini? Northwestern vs Illinois NCAAB Lines & Betting Analysis Tomorrow • Big Ten Tournament … click title for full article.

Posted: Wednesday, February 22, 2017 3:09, EST
Okay, college basketball betting buffs, with the 2017 NCAA March Madness championship tournament quickly approaching, college basketball betting lines enthusiasts everywhere are looking to gather as much expert betting information as possible. With that said, I’m going to offer up my picks for the Final Four, Elite Eight and the handful of possible first round upsets that might take place. … click title for full article.