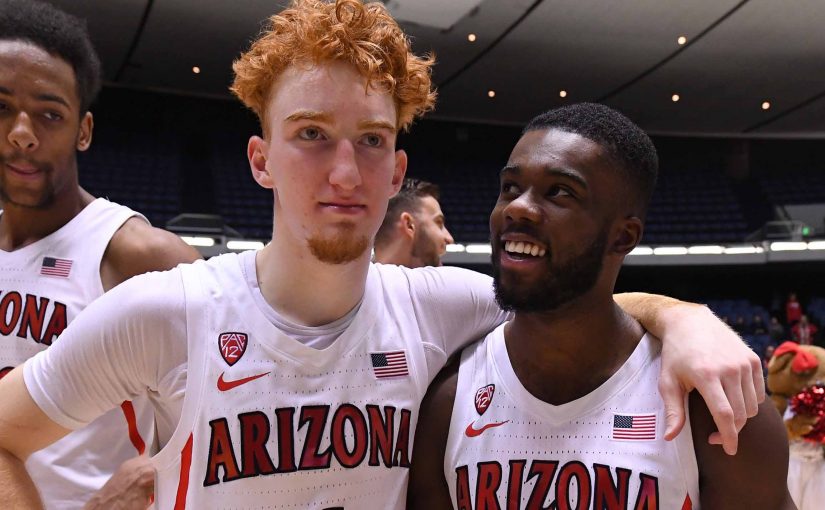 No. 2 Arizona has wrapped up the Pac-12 regular-season title, but the Wildcats still are playing for a top seed in the NCAA Tournament as they host Stanford on Thursday. Arizona is a double-digit favorite on the NCAAB odds.

On Jan. 20, Arizona routed Stanford 85-57 in Palo Alto. Oumar Ballo had a career-high 21 points, while Bennedict Mathurin and Pelle Larsson each scored 13 for the Wildcats. Arizona shot 55.4% and limited Stanford to 30% shooting. Ballo, a 7-foot redshirt sophomore from Mali, scored his 21 points in just 22 minutes off the bench. Spencer Jones and Maxime Raynaud each scored nine points to lead Stanford, which has lost 11 straight at home in the series. Stanford was outscored 48-20 in the paint and never got closer than 11 points in the second half.

Why Bet on Stanford?

Stanford (15-13) will not be in the NCAA Tournament. The Cardinal lost their third in a row Saturday, 53-39 at Cal – the 39 points were easily a season low. The game was tied at 4 before Cal scored 19 consecutive points and then took a 35-12 lead into the break. The Cardinal shot an abysmal 14% (4-28) that included missing all nine of their 3-point attempts in the first half.

Spencer Jones led the Cardinal with 10 points, including a perfect 5-for-5 mark from the foul line, while Jaiden Delaire scored seven points and Harrison Ingram six. Nine different players scored for Stanford on the evening.

Ingram leads Stanford with 10.8 points and 6.4 rebounds per night, while Delaire and Jones are close behind at 10.7 and 10.5 points per game, respectively. Michael O’Connell paces the squad with 3.5 assists per night. The Cardinal have outrebounded their opponent in 23 of 28 games, and have only been outrebounded three times, posting a plus-7.1 margin on the glass, which is 16th-best nationally. Stanford is in the top-25 nationally in offensive rebound (24th, 34.2%) and defensive rebound percentage (15th, 77.2%).

Stanford has three of the top eight freshmen in the Pac-12 in terms of scoring, with Ingram the only true freshman in the conference to average in doubles figures (10.8 pts). Stanford’s freshmen make up 25.6 percent of total scoring by first year players across the league.

Arizona (26-3) clinched the Pac-12 regular-season title with a shockingly easy 91-71 win at No. 16 USC on Tuesday. USC had a sellout crowd at the Galen Center for the second time this season and concluded its home schedule with a 13-3 record. USC admitted 2,700 students, the most in Galen Center history.

Arizona jumped ahead early in the first half with a 20-5 run. Max Agbonkpolo’s 3-pointer and layup sparked a 7-0 run that briefly cut the Wildcats’ lead to single digits, but Arizona finished the half with a 24-9 stretch. USC struggled to find an offensive rhythm all night, shooting just 32.1% in the first half and 39.7% overall. Arizona, which won in a wire-to-wire victory, shot 55.6% from the field while also hitting 12 3-pointers on 25 attempts.

Bennedict Mathurin scored 19 points and Kerr Kriisa added 18 for Arizona. In winning their first regular-season conference title since the 2017-18 season, the Wildcats improved on their best overall record since they were 28-2 in 2013-14. Arizona also shot 48.1% from the field or better in all 10 of its Pac-12 road games.

Arizona is 15-0 at home this season, one of five teams in the country that is undefeated with at least 15 home wins this season. UA also has a 17-game home winning streak, the longest active streak in the Pac-12 and the third-longest in Division I.

Posted: Thursday, March 3, 2022 9:27, EST
No. 2 Arizona has wrapped up the Pac-12 regular-season title, but the Wildcats still are playing for a top seed in the NCAA Tournament as they host Stanford on Thursday. Arizona is a double-digit favorite on the NCAAB odds. How to Bet Stanford at Arizona NCAA Basketball Odds & TV Info When: Thursday, 9 PM ET Where: McKale Center TV: … click title for full article.

Posted: Friday, November 30, 2018 10:34, EST
The Stanford Cardinal haven’t had much luck against the better teams on their schedule yet this season, and the toughest test of the year arrives Saturday evening when the Cardinal play their marquee non-conference game by visiting No. 2 Kansas. The Jayhawks will be double-digit NCAAB odds favorites. How to Bet Stanford at Kansas NCAA Basketball Odds & Game Info The … click title for full article.

Posted: Monday, February 26, 2018 8:07, EST
Why does it feel like whichever team wins the NCAA title in early April will end up vacating it due to NCAA sanctions? ESPN and Yahoo! Sports broke some huge news over the weekend about rampant violations in the sport, including at blue-blood programs like Kentucky, North Carolina, Duke, Arizona and Michigan State. Here are two interesting NCAA Basketball betting … click title for full article.

Posted: Tuesday, February 7, 2017 10:27, EST
The Arizona Wildcats will look to get back in the win column following their humbling loss this past weekend when they host a Stanford Cardinal team that will look to record consecutive victories after getting  big upset of their own the last time out. Now, let’s find out which team is offering the most value in this intriguing Pac-12 pairing. … click title for full article.

How to Bet the Stanford vs Arizona NCAA Hoops Lines

Posted: Friday, March 4, 2016 4:49, EST
The 18th-ranked Arizona Wildcats may not be playing their best basketball by going 1-2 over their last three games, but they’re the pick to extend their mastery over the mediocre Stanford Cardinal when the two rivals square off in their Pac-12 College basketball odds pairing on Saturday. Now, let’s find out why. How to Bet the Stanford vs. No. 18 Arizona … click title for full article.

Posted: Friday, February 12, 2016 2:32, EST
The Oregon Ducks are currently sitting atop the PAC 12 Conference, and with just 6 games left to play in the regular season, they have to be considered the favorites to stay there. They still have some tough games to play coming down the stretch, and it all begins on Saturday when the Ducks take a trip to the Maples … click title for full article.

Posted: Thursday, December 31, 2015 5:47, EST
While the early games in the NCAA Basketball betting season still count in the final standings, the reality of the matter is that there are many who believe that the season doesn’t really begin until conference play starts. That time has come, and we have a great PAC-12 match-up on Friday, January 1 that sees the Utah Utes head into … click title for full article.