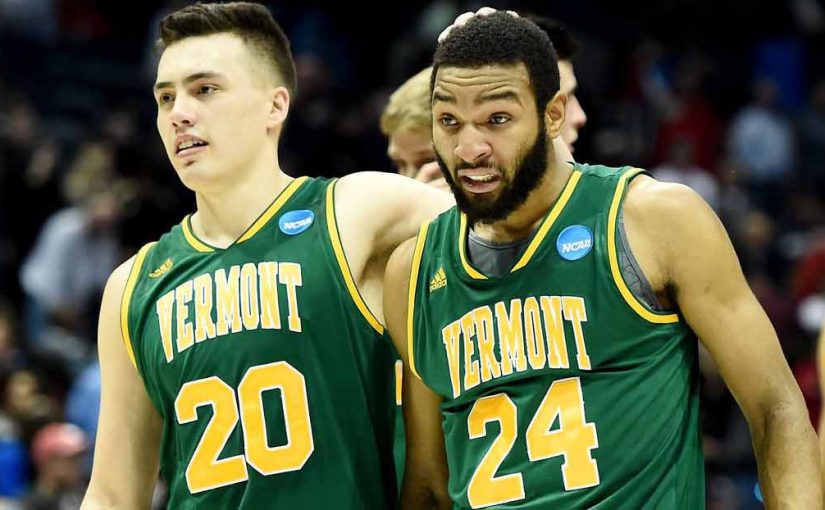 Saturday should almost be considered a holiday for college basketball fans. Why? There’s a conference championship game in the America East between UMBC and Vermont tipping off in the morning. The Catamounts will be solid favorites on the NCAAB odds.

Vermont was 2-0 vs. UMBC this season. They last met on Feb. 19 at Vermont and the Catamounts rolled to an 86-59 victory. Vermont outscored UMBC 15-6 in the final 5:47 of the half to take a 46-27 lead at the break and the game was over. Aaron Deloney had 20 points, Ryan Davis had 18 points and Ben Shungu added 15 points. Davis was a very efficient 8-for-10 from the field and became the 41st player in program history to reach the 1,000-point milestone. Vermont posted a season-high 24 assists. Keondre Kennedy had 13 points for the Retrievers.

Why Bet on UMBC?

Second-seeded UMBC (18-13) advanced with an 80-60 win over No. 4 Hartford on Wednesday to reach the conference title game for the third time in the past four seasons. UMBC won their first America East championship at Vermont in 2018 and fell to the host Catamounts the following season. There was no championship game contested in 2020 and Hartford defeated UMass Lowell last season.

The game vs. Hartford was tied at 33-all at the half and UMBC led, 48-47 with 12:31 to play. Senior guard Keondre Kennedy scored five points in an 8-0 run to extend the lead to 56-47 and the Hawks would get no closer than five points. UMBC shot 62.5 percent in the second half. Senior reserve forward Syzmon Wojcik led five Retrievers in double figures with 19 points and added a game-high nine rebounds.

The 18 wins by UMBC is tied for their sixth-most in 36 years at the NCAA Division I level. Four of those 18-plus win seasons have occurred in the past four years. The Retrievers are 17-16 all-time in the America East Tournament and have the third most titles of current members behind Vermont (7) and UAlbany (5).

Keonte Kennedy earned First Team all-conference honors after leading the Retrievers averaging 15.1 points per game in the regular season and finishing second on the team averaging 5.1 rebounds per game. He shot 49.7 percent from the floor and 40.3 percent from three. He finished sixth in the league in scoring and sixth in field goal percentage.

Darnell Rogers was named to the Third Team All-Conference. He was third on the team averaging 11.3 points per game, while dishing out a team best 3.9 assists per game. His assists mark ranked third in the league this year. Rogers also led the team from the charity stripe shooting 90.5 percent.

Why Bet on Vermont?

Top-seeded Vermont has advanced to the America East Tournament title game for the first time since 2019 when it beat UMBC 66-49. The Catamounts (27-5) routed sixth seed Binghamton 74-42 in the semifinals Wednesday to advance to the title game for the sixth time in the past seven seasons (just not last year).

Ben Shungu scored a game-high 23 points. The Bearcats briefly cut a big UVM lead to single digits with two early makes in the second half, but Vermont answered with a 17-3 run to take a 56-34 lead. Shungu sank a deep three-pointer off an assist from Finn Sullivan and Nick Fiorillo capped off the run with a pair of free throws with 9:18 left in regulation.

The Catamounts remained in front by at least 20 points for the remainder of the game. Vermont’s largest lead of the night came with 37 seconds left on a Kam Gibson triple for the final basket of the game. Shungu’s 23 points came on 10-of-18 shooting from the field, including a 3-for-9 mark from deep. He also pulled in four defensive boards and registered two steals. Ryan Davis was also in double figures with 19 points on an efficient 8-for-12 from the floor.  UVM converted on 49.1% (26-of-53) field goal attempts and 41.7% (10-of-24) attempts from beyond the arc.

The Catamounts improved to 22-5 all-time as a No. 1 seed in the America East Playoffs. John Becker was named America East Coach of the Year, Ryan Davis repeated as Player of the Year and Aaron Deloney was chosen as the league’s Sixth Man of the Year.

The Catamounts clinched the America East Regular Season Title by six games over second-place UMBC, which is the largest margin in league history. Vermont’s 17 conference wins were the most in program history, and tied for the most in the league’s history. Becker and his staff guided the Catamounts to a league-best 79.2 points per game and an average scoring margin of 16.7 points per game against conference foes.

Davis is the fifth Catamount to earn back-to-back Player of the Year honors, winning the award for the 14th time in program history. The senior extends Vermont’s streak to six-straight Player of the Year awards, which is the longest active streak in the country. UVM is also the fourth team in NCAA history to collect at least six consecutive Player of the Year awards. Davis led the Catamounts with a 17.2 scoring average in 26 games played. The 6-8 forward averaged 17.5 points per game in league play, shooting a conference-best 66.0% from the field. Davis’ season-long field goal percentage of 57.9% ranks No. 15 in the country.

Deloney averaged 9.7 points per game off the bench in league play, which ranked No. 3 on the Catamounts’ scoring list. The junior converted on 52.7% of his field goal attempts and shot 39.7% from long range in league play.

Posted: Friday, March 11, 2022 9:00, EST
Saturday should almost be considered a holiday for college basketball fans. Why? There’s a conference championship game in the America East between UMBC and Vermont tipping off in the morning. The Catamounts will be solid favorites on the NCAAB odds. How to Bet UMBC at. Vermont NCAA Basketball Odds & TV Info When: Saturday, 11 AM ET Where: Patrick Gymnasium, Read More

Posted: Wednesday, March 7, 2018 10:12, EST
Every year when March Madness begins, we are treated to stunning buzzer beaters and surprise results that no-one saw coming. If you play a bracket every year, you know that there are always one or two teams who create an upset that sends said bracket down the toilet in a hurry. We all know that there are going to be Read More

Posted: Wednesday, March 15, 2017 11:42, EDT
When it comes time to take part in the playoffs in any sport, it is very often the team holding the hot hand that makes a deep run in the postseason. This is where you can often find potential bracket busters when March Madness rolls around, as it’s possible for a hot lower seeded team to ride the wave of Read More

Sports in the State of Vermont