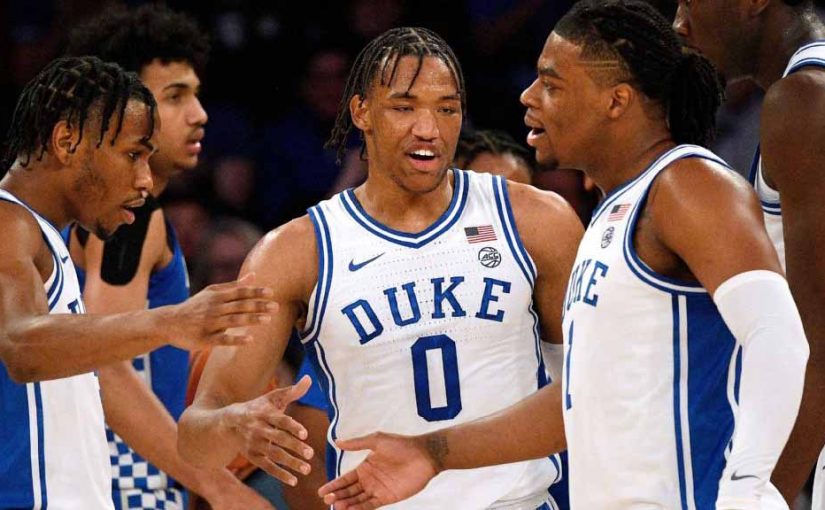 No. 7 Duke is in control of its destiny to win the ACC regular-season title and perhaps earn a No. 1 seed in the NCAA Tournament, while Virginia can help play spoiler against its bitter rival on Wednesday. The Blue Devils are favored on the NCAAB odds for a little payback.

On Feb. 7, Virginia was a 69-68 upset winner at Duke. Reece Beekman’s 3-pointer with 1.1 seconds left over Duke’s Paolo Banchero was just the second made 3-pointer on 12 attempts for the Cavaliers. And five of Beekman’s seven points came in the last two minutes. Before the last sequence, Beekman made a backcourt steal and basket to knot the score but failed to complete the three-point play. Then Duke’s Trevor Keels put Duke back on top with two free throws with 1:26 left. Banchero was held to a season-low nine points and his desperation 3 hit only the side of the backboard to end the game.

Duke won its fourth in a row since that Virginia loss, 88-70 over Florida State on Saturday. Hall of Fame coach Mike Krzyzewski was back after missing the second half of the previous game because he wasn’t feeling well. The Blue Devils (23-4) closed the half on a 12-2 burst to take a 52-41 lead against the injury-depleted Seminoles. Duke shot 52% for the game, including 11 of 28 from 3-point range. FSU shot just 11 of 27 (41%) after halftime as the deficit ballooned.

“I thought that we didn’t execute nearly as well in the beginning of the second half as we had in the first half,” FSU coach Leonard Hamilton said. “I thought once they got up about 15 points, it was extremely challenging for us to get over that hump.”

Duke junior Wendell Moore Jr., had 16 points, seven assists, six steals and five rebounds – the six steals matching his career high (Gonzaga). The game was Moore’s power-conference leading 11th this season with at least 10 points, five rebounds and five assists. Freshman Paolo Banchero recorded team highs in both points (17) and rebounds (eight). Sophomore Mark Williams was 5-of-7 from the field for 10 points. Over Duke’s last 12 games, Williams is 67-of-86 (.779) from the field. He has made 36-of-43 (.837) over the last seven games.

Williams leads the ACC and ranks 11th nationally in blocked shots. He is also the nation’s only player shooting .700+ from the field and .700+ at the free throw line (minimum 100 field goal attempts). Leading the ACC in both field goal defense (.406) and three-point defense (.297), the Blue Devils have allowed opponents to shoot .282 from three-point range since Jan. 1 — the best three-point defense by power conference team in that span.

Why Bet on Virginia?

With starting wing Armaan Franklin hampered by foul trouble and a sore toe, senior Kody Stattmann played 26 minutes and contributed eight points, four rebounds and two blocks. With 5:55 to play, Stattmann capped a spin move by banking in a shot to put UVA up 57-53. Kadin Shedrick came off the bench to post a double-double (13 points and career-high 13 rebounds). The Cavaliers have won five or more ACC road games for the sixth consecutive season.

UVA is 1-1 vs. ranked opponents

“Obviously, they’re a special, talented  in 2021-22.team,” said UVA coach Tony Bennett of Duke. Bennett is hoping to take his program to an eighth straight NCAA tournament. “It will take us to play at a high level and quality on both ends. Teams like that, they make you pay. We’ll just have to be as ready as you can.”

Posted: Wednesday, February 23, 2022 7:27, EST
No. 7 Duke is in control of its destiny to win the ACC regular-season title and perhaps earn a No. 1 seed in the NCAA Tournament, while Virginia can help play spoiler against its bitter rival on Wednesday. The Blue Devils are favored on the NCAAB odds for a little payback. How to Bet Duke at Virginia NCAA Basketball Odds … click title for full article.

Posted: Monday, February 7, 2022 8:56, EST
One of the best college basketball rivalries in the ACC is renewed on Monday night as Virginia visits No. 9 Duke, although the Blue Devils may move up a few spots in the new AP Top 25 on Monday. The are solid favorites on the NCAAB odds. How to Bet Virginia at Duke NCAA Basketball Odds & TV Info When: … click title for full article.

Posted: Tuesday, February 23, 2021 9:29, EST
Virginia had been in control of its destiny to win the ACC regular-season title but had a rough last week. The No. 15 Cavs will be sizable home favorites on Wednesday against NC State. UVA is +2800 to win the national title. How to Bet NC State at Virginia NCAA Basketball Odds & TV Info When: Wednesday, 6:30 PM ET … click title for full article.

Posted: Friday, February 19, 2021 8:10, EST
Technically, No. 7 Virginia is the defending national champion because the 2020 NCAA Tournament was canceled. The Wahoos will be back in the Big Dance and among the NCAAB favorites again next month, but struggling Duke shockingly could miss the tournament barring a late-season surge. UVA will be favored at Duke on Saturday. How to Bet Virginia at Duke NCAA … click title for full article.

Posted: Monday, February 15, 2021 10:17, EST
Monday’s college basketball schedule is rather light, but there is one terrific matchup from the ACC as No. 9 Virginia visits No. 17 Florida State, which is a short favorite on the NCAAB odds. A Wahoos win could all but wrap up the ACC regular-season title. How to Bet Virginia at Florida State NCAA Basketball Odds & TV Info When: … click title for full article.

Posted: Friday, January 15, 2021 8:31, EST
A handful of teams could win the ACC regular-season title this season, and No. 18 Virginia and No. 12 Clemson are two of them. The two face off in South Carolina on Saturday evening with the Tigers expected to be short NCAAB favorites. How to Bet Virginia at Clemson NCAA Basketball Odds & TV Info When: Saturday, 6 PM ET … click title for full article.

Posted: Tuesday, January 12, 2021 9:15, EST
It has been a rough season for the Notre Dame men’s basketball program and the Irish are surely staring at another ACC loss on Wednesday night when they visit No. 18 Virginia, which should be a double-digit favorite on the NCAAB odds. How to Bet Notre Dame at Virginia NCAA Basketball Odds & TV Info When: Wednesday, 4:30 PM ET … click title for full article.

Posted: Friday, January 8, 2021 10:17, EST
The lone ranked matchup on a busy day of college basketball on Saturday is from the Big 12 as No. 4 and surprising Texas visits No. 14 West Virginia. The Mountaineers likely will be short favorites on the NCAAB odds as they are so tough to beat at home. How to Bet Texas at West Virginia NCAA Basketball Odds & … click title for full article.

Posted: Tuesday, November 10, 2020 9:34, EST
The 2020-21 college basketball season is only two weeks away, and the Associated Press has released its preseason Top 25 with Gonzaga on top. Despite losing West Coast Conference Player of the Year Filip Petrusev, the Bulldogs received 28 first-place votes and 1,541 points from a 64-member national media panel. Division I College Basketball Rankings | 2020 Expert Analysis The … click title for full article.