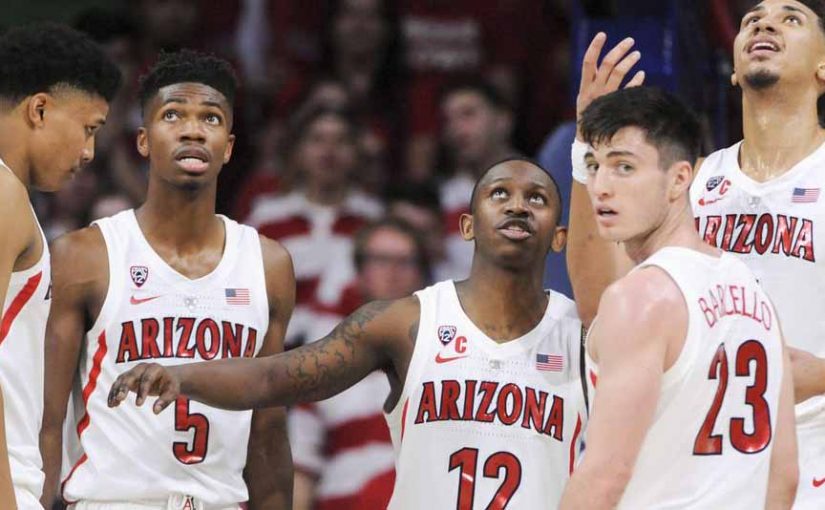 The lone ranked team in action around college basketball on Thursday is No. 11 Arizona as the Wildcats host Washington in Pac-12 action, the conference opener for both. Arizona is a heavy favorite in the NCAAB odds.

On Feb. 27, Arizona beat visiting Washington 75-74. James Akinjo scored a career-high 26 points with seven assists, his final one a kick-out to Azuolas Tubelis who converted a baseline jumper for the win. Washington’s Quade Green was called for a charge, and after a timeout by Arizona with 15 seconds left, Akinjo headed into the paint before dishing the ball to Tubelis, who with one foot on the 3-point arc hit the game-winner with 5.2 seconds remaining. Green’s hurried 3-point try at the buzzer was short. Arizona leads all-time 54-31.

The Huskies (4-4) were knocked off by Winthrop last Saturday, 82-74 at home. Winthrop, picked to win the Big South Conference and has won the last two conference titles, looked like the more well-rested team on Saturday. The Eagles were coming off five days rest while the Huskies were playing their fourth game in six days.

The Huskies trailed 35-30 at halftime and the Eagles never opened the door for the Huskies to get any closer. Winthrop had a 16-4 edge in second-chance points. Daejon Davis scored a season-high 21 points to lead four Huskies in double digits.

“We can look at the rebounds and second-chance points. We can make all the excuses in the world,” Davis said. “They were more prepared for us in this game. They came out and hit us first, and like coach said, it’s hard for us to play from behind all game.”

For this game, Washington is 5-9 vs. ranked teams under Mike Hopkins. Their last win over a top-10 team came against No. 8 Arizona in Seattle last season on Dominic Green’s buzzer-beating three-pointer.

The Wildcats (6-0) are off a 105-59 blowout of Sacramento State on Saturday. Azoulas Tubelis scored 22 points, and Christian Koloko added 20 before leaving with an ankle injury. The Wildcats had a huge size advantage and exploited it, overpowering the Hornets by 29 points in the paint. Arizona had 31 assists on 38 field goals, including nine by Kerr Kriisa, and shot 55%.

Koloko also had seven rebounds, two steals and a blocked shot but left early in the second half with a sprained ankle. He’s questionable for this game. Including a 20-point performance against Sacramento State, Koloko has scored at least 13 points in five of Arizona’s six games.

Koloko ranks ninth in the country in FG% this year, shooting 69.2% while averaging 16.2 points. The native of Cameroon has 21 blocked shots this season, tops in the Pac-12 and 15th nationally. He has scored in double figures in five of six games this season after reaching double figures twice in his first 54 career games. His shot-blocking has taken another step up this season. Koloko’s 3.5 blocks per game leads the conference.

Sophomore Azuolas Tubelis leads Arizona in scoring (16.5) and is second in rebounding (6.5). He has scored at least 13 points in every game this year. Arizona is the only team in the country with two players that are 6-foot-11 or taller and averaging 16.0 or more points.

Posted: Thursday, December 2, 2021 9:17, EST
The lone ranked team in action around college basketball on Thursday is No. 11 Arizona as the Wildcats host Washington in Pac-12 action, the conference opener for both. Arizona is a heavy favorite in the NCAAB odds. How to Bet Washington at Arizona NCAA Basketball Odds & TV Info When: Thursday, 8:30 PM ET Where: McKale Center TV: Pac-12 Network … click title for full article.

Posted: Wednesday, February 10, 2021 10:21, EST
While the University of Washington is playing out the string on a very disappointing season, No. 20 Southern Cal will be an NCAA Tournament team and is battling rival UCLA for the Pac-12 title. The Trojans will be favored at Washington on the NCAAB odds for Thursday’s matchup. How to Bet USC at Washington NCAA Basketball Odds & TV Info … click title for full article.

Posted: Saturday, March 23, 2019 8:00, EDT
The Washington Huskies battle the North Carolina Tar Heels in the second round of the NCAA Tournament on March 24. The Huskies beat Utah State in round one while the Tar Heels handled Iona. Can Washington continue their improbable run, or will the one-seed in the Midwest win and cover? Print NCAA Tournament Brackets & Final Four March Madness PDF … click title for full article.

Posted: Wednesday, March 6, 2019 9:04, EST
Washington already has clinched the Pac-12 regular-season title and a top seed in the conference tournament, so the Huskies have little to play for on Wednesday vs. Oregon State. UW is still solidly favored in the college basketball lines. Download Our Exclusive 2019 March Madness Bracket now! How to Bet Oregon State at Washington NCAA Basketball Odds & TV Info Stephen … click title for full article.

Posted: Tuesday, February 26, 2019 4:45, EST
If you’re a college basketball betting enthusiast that is fired up about the quickly approaching start of conference championship play and the ensuing March Madness National Championship Tournament, then you’re in for a treat. Thanks to the in-depth analysis and expert predictions that you’re about to get, you’re going to have a fantastic idea of just which teams will likely … click title for full article.

Posted: Monday, February 18, 2019 10:29, EST
We’re getting closer to the 2019 March Madness tournament. Just a few years ago led by guys like Jaylen Brown and Ivan Rabb, the Cal Golden Bears were an NCAA Tournament team. To say that the program has fallen on hard times is being kind as it could well be the worst Power 5 team in the country and go … click title for full article.

Posted: Monday, December 3, 2018 11:06, EST
The 2018-2019 College Basketball Season starts revving up this week with huge NCAAB betting matchups versus some of the top teams in the nation. Check out a run down of 4 of the biggest battles this week starting with Wednesday’s throw down between the Pac 12’s Washington Huskies and the best team in the nation, the Gonzaga Bulldogs. Top NCAAB … click title for full article.

Posted: Tuesday, February 7, 2017 8:26, EST
Why isn’t anyone talking about No. 11 Cincinnati as a legitimate Final Four team and a potential No. 1 seed in the Big Dance? The Bearcats are unbeaten in the American Athletic Conference and have just two losses all season. They host a dangerous Central Florida team on Wednesday, but UC will be solid favored on NCAA basketball odds. UCF … click title for full article.