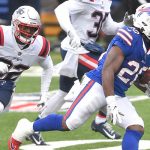 Scorching New England looks to take an outright lead over AFC East rival Buffalo in one of the season’s best Monday night matchups. The Patriots are the hottest team in the league, but still haven’t wrested first place in the AFC East away from the Bills. Will Josh Allen and his teammates grab the victory and cover? Or will the Pats continue dominating their opponents? Check out NFL odds, analysis, and a free pick for New England at Buffalo. Ready for the best NFL betting action you will find online? At MyBookie you can review, compare and bet on the latest NFL odds, Game lines, spreads, totals, props and more. Creating winners every season we offer the most comprehensive selection of NFL futures and player props, No matter your knowledge or bankroll, we have your action covered with the latest NFL trends, picks and locks this season, we offer early lines for every NFL game in 2021.

Scorching New England looks to take an outright lead over AFC East rival Buffalo in one of the season’s best Monday night matchups. The Patriots are the hottest team in the league, but still haven’t wrested first place in the AFC East away from the Bills. Will Josh Allen and his teammates grab the victory and cover? Or will the Pats continue dominating their opponents? Check out NFL odds, analysis, and a free pick for New England at Buffalo.

Why bet on New England versus Buffalo?

On Monday, New England goes for their seventh straight victory. The Patriots not only have won six straight, but they’ve covered in all six. Not only that, but with each subsequent win, the Patriots get stronger. On Nov. 18, New England beat Atlanta 25-10. Then on Nov. 28, the Patriots dusted then playoff 1-seed Tennessee 36-13.

Why bet on Buffalo versus New England?

Buffalo hadn’t looked good in 2-of-3 games. But a trip to New Orleans on Thanksgiving night left no doubt that the Bills remain one of the top contenders to win the Super Bowl. Versus the Saints, Buffalo dominated. Josh Allen threw 4 TD passes and the Bills held New Orleans to just 6 points in the 31-6 victory. Now back on track, Buffalo may not look back on their way to an AFC title.

The Bills looked good beating New Orleans. However, after NFL Week 13 Thursday’s game versus the Cowboys, the Saints have now lost six straight.

New Orleans isn’t a good football team. So we can’t look at Buffalo’s victory over the Saints to give us clues as to how the Bills will perform against the New England Patriots.

Right now, Bill Belichick’s team is the best in the NFL. Rookie quarterback Mac Jones has an 11-to-3 TD to INT ratio during the six game winning streak. Jones completes over 70% of his passes.

Not only that, but New England’s defense ranks first in points allowed per game. Buffalo also has a good defense. But the Bills must play this one without Tre’Davious White.

Their best cornerback is out for the season with a knee injury. Any way we look at it, the Patriots prevail. New England moneyline is the play.

Posted: Friday, December 3, 2021 1:36, EST
Scorching New England looks to take an outright lead over AFC East rival Buffalo in one of the season’s best Monday night matchups. The Patriots are the hottest team in the league, but still haven’t wrested first place in the AFC East away from the Bills. Will Josh Allen and his teammates grab the victory and cover? Or will the Read More

Posted: Friday, December 3, 2021 11:01, EST
The Jacksonville Jaguars and Los Angeles Rams are set to do battle in Week 13 of the NFL season. It has not been Jacksonville’s year, to say the least, but the Rams have had some issues of their own over the last month. While the Rams enter this matchup as double-digit favorites, Los Angeles will have to be sharp to Read More

Posted: Friday, December 3, 2021 8:48, EST
Don’t look now, but the Washington Football Team, a squad that had a very disappointing start to the season, has won three games in a row and has gotten themselves back into the playoff race in the NFC. Speaking of playoff races, the Las Vegas Raiders, sitting at 6-5, are in the hunt for an AFC playoff berth. This is Read More

Posted: Friday, December 3, 2021 8:38, EST
Two AFC South rivals meet for the second time this season at NRG Stadium, as the Houston Texans will host the Indianapolis Colts on Sunday. The season can’t get over soon enough for the 2-9 Texans. After an offseason full of turmoil, the on-field product has been cringe-worthy. Without any stars on offense and a young defense, the Texans are Read More

Posted: Friday, December 3, 2021 8:16, EST
The Baltimore Ravens had never been favored in Pittsburgh in a game that Ben Roethlisberger was going to play. That changes on Sunday as the Ravens look to add to the Steelers’ woes as nearly 5-point favorites on the NFL odds. How to Bet Ravens at Steelers NFL Odds & TV Info When: Sunday, 4:25 PM ET Where: Heinz Field Read More

Posted: Friday, December 3, 2021 8:12, EST
The Seattle Seahawks have never finished with a losing record since drafting Russell Wilson in 2012. That will change if the struggling Hawks lose as short home underdogs on the NFL odds to the surging San Francisco 49ers on Sunday. How to Bet 49ers at Seahawks NFL Odds & TV Info When: Sunday, 4:25 PM ET Where: Lumen Field, Seattle Read More

Posted: Thursday, December 2, 2021 6:16, EST
Both the Dallas Cowboys and New Orleans Saints lost on Thanksgiving and they try again this Thursday night facing one another from the Big Easy. Dallas is favored on the NFL odds despite the fact the Cowboys will be without their head coach. How to Bet Cowboys at Saints NFL Odds & TV Info When: Thursday, 8:20 PM ET Where: Read More

Posted: Thursday, December 2, 2021 4:22, EST
The Los Angeles Chargers head to Cincinnati on Sunday hoping to get back on the winning track. After last week’s loss versus the rival Denver Broncos, the Chargers have now fallen to 6-5. Kansas City is rolling, which means LAC can’t afford any more losses. 7-4 Cincinnati is a game behind the Baltimore Ravens in the AFC North, making this Read More

Posted: Thursday, December 2, 2021 1:49, EST
The Philadelphia Eagles will play a New York team for the second week in a row, as the Eagles will travel to MetLife Stadium to take on the New York Jets. The Eagles are hoping that they have a little more success against this New York team, as last week they dropped a game to the Giants, ending their two-game Read More
View Full NFL 2021 Archive