NFL News and Rumors
The NFL is in full off-season mode, and with the draft having gone by, the teams that are changing their uniforms have released their new togs. Most of the teams are holding pat, but a few are making some changes. Let’s take a look at the best and worst according to NFL betting fans. 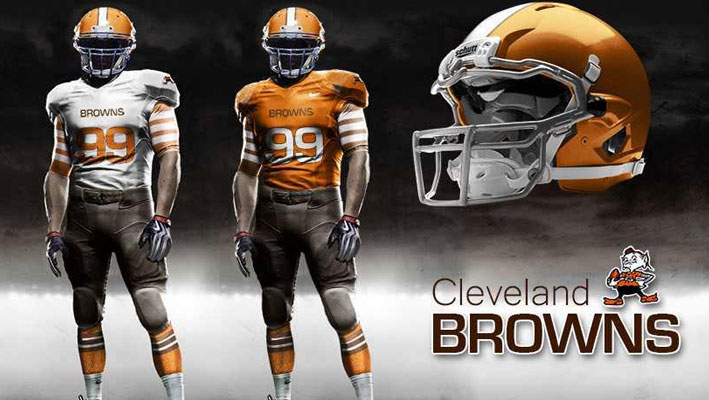 It seems like the last time the Browns changed their uniforms, they had Otto Graham leading them to title after title, well back before the merger with the AFL and the Super Bowl era. When Art Modell wanted to take his Browns franchise to Baltimore, the league ordered him to leave the team’s name, uniform and color scheme back in Cleveland Browns.So the new scheme that the team has rolled out for 2015 was going to be a major shock. One cool touch is that the helmet masks are going to be brown for the first time in decades. However, the rest of the changes make it look like the team has joined a local high school district. The big font for “CLEVELAND” is the only example of an NFL team featuring its city name on the jersey – which may not be a good thing.The worst part, though, is the word BROWNS running down the pant legs. It really makes the team look like it has a high school scheme. The Browns really had a scheme that worked, and by changing it, they have taken a step back.

The font on the Jaguars’ uniforms makes them look like  one of the teams in “Cyberball” – that video game that featured robots running around on the field and making plays, and their scheme would do better in a 1980s arcade or a football scene in The Running Man than on an NFL field. The piping on those black pants is simply a real nightmare.And what about those helmets? The gold on the back, fading through the Jaguar head into a black front, looks like something out of the back of a disco club. The ferocity of the Philadelphia Eagle on its helmet stands in stark contrast with the silliness of this mildly irritated cat.

Remember the Cincinnati Bengals‘ uniforms from the 1980s? There was a lot less of that animal print, with just a band around the shoulders. The helmet read BENGALS instead of having those stripes. While giving the helmet some striping was a cool look, turning the uniform into an orange, black and white nightmare was not. Given the fact that two of these three teams at the bottom feature animal prints, perhaps teams with that kind of mascot should consider toning down those features in their uniforms and use them as accent items instead of primary schemes.

Two unique features make the Bears’ uniforms look classic and timeless: the matching stripes on the socks and sleeves, and the number font that no other teams share. The color scheme is also a terrific look for football. The helmet logo could use an update, but that’s really quibbling at this point.

Three colors: black, silver and white. No throwback uniforms – because they wear the same thing every week they’ve worn for decades. While the Raiders aren’t putting the best product on the field, their look is timeless.

That italic numbering would have bumped this down to #3 on this list, if it weren’t for those terrific bumblebee throwback jerseys. Other than that, the classic black and yellow look (have you ever noticed that all of the Pittsburgh teams share those colors? – the Penguins and the Pirates are black and yellow too) has worked for decades – and it still works today.
Older post
Newer post