NFL News and Rumors
Before this past NFL betting week, people were talking about the Tampa Bay Buccaneers (5-5) as potential playoff contenders. The Bucs had pulled off consecutive wins against the Dallas Cowboys and the Philadelphia Eagles, the latter a 45-17 whipping that saw the Bucs roll up 521 total yards. Even after the Indianapolis Colts cooled off Tampa Bay 25-12 this past Sunday, sending them to a 5-6 record and making that wild card look less likely, though, one thing is clear:

Check out who is on the cover of 2015 Topps Chrome Football. Comes out Nov. 20 @toppscards #ToppsPartner pic.twitter.com/MRzuIkjDnN

The Rookie of the Year trophy in 2015 will go to Jameis Winston.Not many people had foreseen this after Week 1, when fellow rookie Marcus Mariota outdueled Winston and the Tennessee Titans waltzed out with a victory. While Mariota has fewer talented players around him, Winston has taken advantage of his opportunities. Against the Eagles, Winston completed five touchdown passes, tying the rookie record. Since the team fell 37-23 to Carolina in Week 4, Winston has elevated his game. His passer rating hit a high of 94.7 in Week 10 but has stayed above 60 each week (except in that grinding win against Dallas). 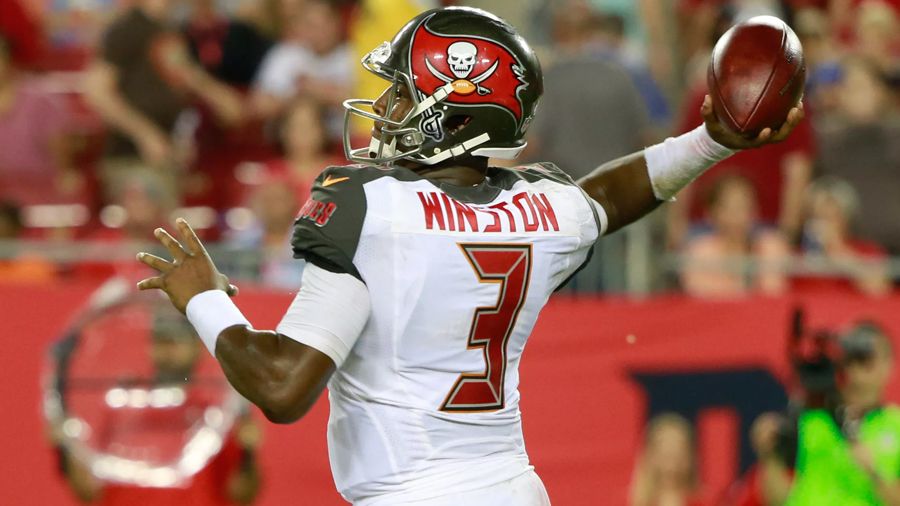 How do things look the rest of the way for the Buccaneers? They have Atlanta, New Orleans, St. Louis, Chicago and Carolina remaining on the schedule. Atlanta is in a free fall, and the Saints have already hit the bottom of their season. The Rams looked good early on but have fallen off as well. The Bears are wildly inconsistent from one week to the next. So a team that is 5-6 now has a decent shot of being 9-6 going into that finale against Carolina. The Panthers are 11-0 now, but what if they falter and are 14-1 then, with the first seed locked up? It’s not hard to see them resting a lot of starters and seeing the Bucs win to go 10-6. That’s a record that could easily earn a wild card.So keep your eye on Winston and the Buccaneers. In a season when so many dynamic quarterbacks (Romo, Flacco, Brees, Rivers, Manning, Luck, Roethlisberger, among others) are suffering through difficult seasons, Winston stands out as the best talent of the next generation of signal-callers. If you’re a Buccaneer fan, you’ll enjoy this ride – and look forward to what Winston brings you in the future. The Colts are better right now than anyone the Buccaneers will face in the next four weeks, so consider putting your money on Tampa Bay between now and that finale.
Older post
Newer post