NFL News and Rumors
Much has been documented about how great defenses win championships, but without a good offense, winning games becomes virtually impossible, especially when you are playing against a great attacking team. That is the predicament the iffy Denver offense (with excellent defense) will have to deal with this Sunday when the Broncos host the New England Patriots, who are irrefutably the best offensive team in the AFC. As we prepare for this mouthwatering encounter that features arch-rivals Tom Brady and Peyton Manning going against each other, let’s take a succinct look at what the Manning-led Broncos offense offers in the AFC Championship Game Odds.

Denver Got the Job Done Against Pittsburgh

It wasn’t easy or pretty, but Denver played well enough in the Divisional Round against Pittsburgh to claim a 23-16 win on Sunday. Peyton Manning, playing in his first start since November 15, was far from fluid, throwing for just 222 yards with no touchdowns—his third game in a row (including two starts) that he failed to throw a touchdown pass.Manning, however, made a couple of big plays that ultimately helped to win the game, including the deep 31-yard pass to Bennie Fowler on third-and-12, which helped set up a touchdown in the fourth quarter.Wide receivers Emmanuel Sanders and Demaryius Thomas also performed decently against Pittsburgh, something they’ll be hoping to replicate this week. Sanders, in particular, looked splendid against the Steelers, leading Denver with five catches for 85 yards. Notably, he also had a game-high 113 yards in the Week 12 home win over New England, a game that featured backup quarterback Brock Osweiler. If Manning can find his footing this Sunday, he should be able to enjoy the trustworthy services of his receivers, of course led by Sanders and Thomas.

With both Manning and Osweiler not being able to do much with their hands this season, coach Kubiak’s run-heavy offense has proved very pivotal for the team. And from the looks of things, the Broncos will probably want to run the ball more once again, given the suspicious nature of the team’s passing game. 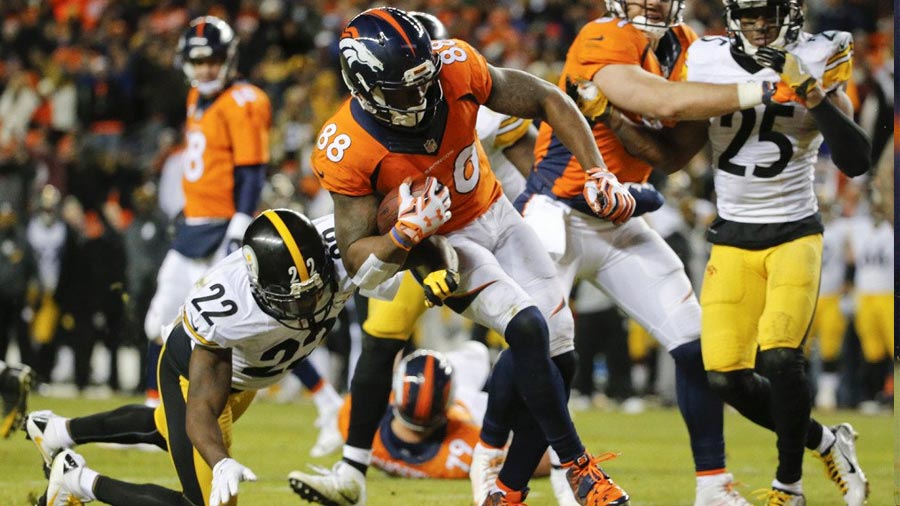 Against the Steelers, running back C.J. Anderson performed strongly, leading the team with 72 yards and a score on 15 carries, while also scoring a two-point conversion. In the 30-24 win against New England in Week 12, Anderson was also big for his team, torching the Patriots for a 51-yard game-winning touchdown in overtime. That touchdown culminated a splendid performance for the star running back, who finished the game with 113 yards and two TDs on just 15 carries. It therefore goes without saying that Anderson and his fellow runners will be crucial in this week’s game against Denver.

Overall Outlook: The Good and The Bad

Whereas it is concerning that Denver finished the regular season with an offense that ranked at #16 in efficiency, the exact numbers on the ground aren’t that bad. Finishing the regular season with 5,688 total yards (averaging at 355.5 YPG) and 24.3 PPG scoring is good enough to win them this AFC Championship encounter, especially if their defense comes up big. Personally, I am yet to be impressed with the performance of Manning this season, in spite of the fact that he’s been able to lead his team to two crucial game-winning drives in his last two games.But then again, Osweiler is a good backup and he could be used in this game in case Manning continues to struggle. Moreover, Kubiak will most-certainly try to develop a good rushing game early on here, with Anderson (720 yards, 5 TDs in the regular season) and fellow RB Ronnie Hillman (863 yards, 7 TDs) being used extensively. With such, the Broncos should be able to have a balanced attacking unit, giving them an advantage over New England’s one-sided passing attack that lacks a running game. Along with the support of Denver’s defense, a potential victory could be in the offing for the underrated Broncos team that will be importantly playing in their homely Sports Authority Field in Denver.
Older post
Newer post