NFL News and Rumors
Thanks to a dominant 32-18 road win in Washington on Sunday, the Green Bay Packers are now in the Divisional Round of 2015-16 NFL playoffs. It, however, doesn’t get any easier for the Packers, as their next task at hand is a clash against the Arizona Cardinals, a team that manhandled Green Bay to the tune of 38-8 in Week 16, barely a month ago.Can the Packers get revenge at the University of Arizona Stadium, Glendale on Saturday, January 16th, or will the Cardinals hold serve as the NFL betting favorites in front of their home fans? Here is comprehensive NFL odds preview of this game slated to start at 8:15 p.m. ET, with the broadcast brought to you live by NBC.

How to Bet on Packers vs. Cardinals NFC Divisional Round NFL Lines

In our early MyBookie.ag NFL betting lines, the home-playing Cardinals are favored in the point spread by 7 points over the Packers (+7). The Moneyline numbers are yet to be released, but the OVER/UNDER total betting lines are already out, with the initial number set at 50. Guide your wagers on this marquee NFC Showdown with the analysis below.

Why Bet on the Packers’ NFL Lines at +7

After Green Bay’s much-criticized defense sacked the on-song Washington QB Kirk Cousins six times and limited him to two total TDs (one passing, one rushing), you can’t help but feel that Arizona’s QB Carson Palmer won’t be having it easy if Green Bay’s pass rush shows up once again. Not to forget, Green Bay featured a solid rush defense that limited the Redskins to just 84 rushing yards, while the entire secondary worked as a cohesive unit, making couple of crucial goal-line stands that gave Green Bay’s offense time to plan attacks of its own. With that, Arizona’s surging rookie RB David Johnson and other weapons in Palmer’s offense will have their work cut out for them.Offensively, the Packers looked to be in their early season form, with Rodgers particularly shining in the second quarter, where he passed for 148 yards and two touchdowns on 14-of-20 throws to give the Packers a half-time lead. After that, running backs Eddie Lacy and James Starks took over the game, as each of them scored a TD and finished the game with 116 combined rushing yards. Obviously, the Cardinals are an entirely different animal defensively (both in defending the run and pass) when compared to the leaky Redskins, but after such a spirited performance at the intimidating FedEx Field, there is definitely a lot of hope that the playoff-solid Rodgers and his offense could be due for another big showing.

Why Bet on the Cardinals’ NFL Lines at -7

The biggest advantage the Cards have over the Packers ahead of Saturday’s clash is their healthier team. Thanks to their first-round bye, banged up players like linebacker Markus Golden, defensive tackle Josh Mauro, defensive lineman Frostee Rucker, running back Andre Ellington and wide receiver Michael Floyd are all likely to be healthy for Saturday’s game. Meanwhile, the already short-handed Packers accumulated more injuries from their win at Washington. For instance, WR Davante Adams suffered a right knee in the third quarter of Sunday’s game and didn’t return. This is a team that is already missing cornerback Sam Shields (concussion; out since Week 15) and left tackle David Bakhtiari (left ankle sprain; out since Week 16), among other players, something that could prove costly to Green Bay if the players are not healthy in time for Saturday’s game. 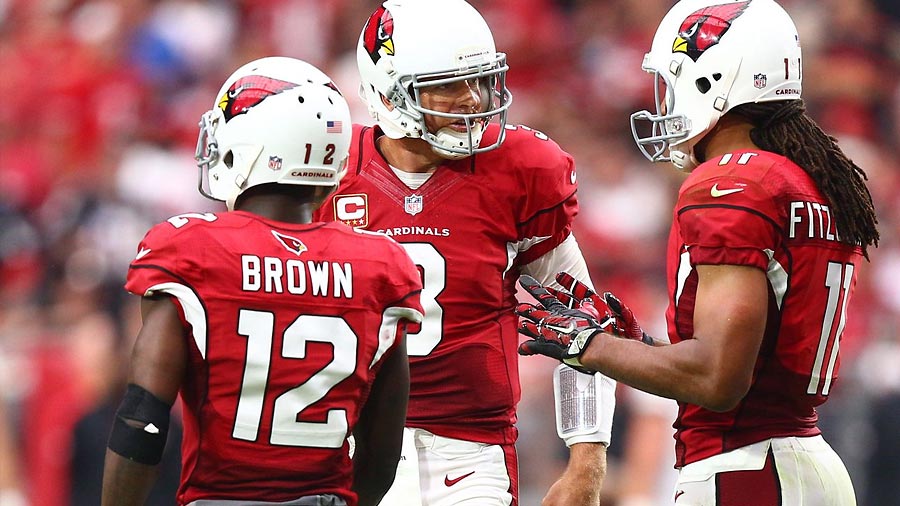 Injuries aside, Arizona’s defense doesn’t need any introductions. When the Packers traveled to the desert in Week 16, they were not only reduced to just 8 points by this Arizona defense, but the mighty Rodgers was sacked a whopping nine times, including two recovered fumbles that were returned for a pair of touchdowns. Meanwhile, Arizona’s sixth-ranked rush defense is more than capable of frustrating Green Bay’s running game, as was the case when the two meet in Week 16.As for the offense, all you need to do is look at the season numbers of MVP-contending QB Palmer to know what he brings to the team. Added to rookie running back Johnson’s surging performances and a strong group of runners that can equally take over the game altogether, it would be a mistake to assume that the Packers will be able to stop Arizona from staying productive offensively.

As glimpsed above, there’s definitely a lot going on in favor of the Cards, so it wouldn’t be a big surprise if they deliver another blowout win over Green Bay. Don’t, however, sleep on Rodgers, as his playoff experience brings a lot of pedigree here, something that could cause troubles for the inexperienced Cardinals team. That said, Arizona has been the real deal this season, so although the Packers are well-capable of keeping things tight and interesting on Saturday, we fancy the Cards emerging victorious, mainly because of their superior defense and all-roundedness on both sides of the ball.My Predictions — Final Score: Arizona 25, Green Bay 20, NFL Picks: Arizona SU, Green Bay ATS, Game Total UNDER 50.
Older post
Newer post