NFL News and Rumors
If you’re gearing up for the NFL betting season and you’re looking to gather as much pertinent information as possible on every team in the league, then you’re going to enjoy this expert analysis on the five burning questions surrounding Matthew Stafford and the Detroit Lions (11-5 SU, 7-9 ATS, 5-11 O/U) as they get set for the upcoming season.Since haste makes waste and the start of training camps across the league is quickly approaching, let’s get started.1. Can Matthew Stafford improve as a leader?Matthew Stafford finished the 2014 regular season ninth in passing yards (4,257 yards) but throwing the ball for big yardage isn’t Stafford’s problem. What the Lions’ strong-armed signal-caller really lacks is leadership, both on the field and in the locker room. Stafford is just 35-42 as a starter and 0-2 in two playoff outings, including last season’s crushing postseason loss to Dallas. Detroit’s offense fished an impressive first in scoring (30.4 ppg), but I don’t think Matthew Stafford commands the respect of his teammates the way superstars like Aaron Rodgers, Peyton Manning or Tom Brady do with their respective teams. Stafford is still just 27-years-old,so it’s still possible he can improve as a leader for the Lions moving forward, but if I were a betting man, I’d say it’s not gonna’ happen.

In honor of the upcoming holiday, check out some explosive #TBT plays from last season: http://t.co/trj7nAk2Bb pic.twitter.com/ilmn6s46hB

2. Can the defense overcome the loss of Ndamukong Suh?While losing a player the caliber of Ndamukong Suh is never an easy pill to swallow, Detroit did finish the 2014 season ranked second in total yards allowed (300.9 ypg), first against the run and third in points allowed (17.6 ppg). Suh was undeniably a big part of that success, but he certainly wasn’t responsible for all of it.The Lions drafted cornerback Alex Carter in the third round and defensive tackle Gabe Wright in the fourth round and made a handful of solid free agent transactions that I believe will keep the Lions both, overcome the loss of Ndamukong Suh while remaining a top 10 defensive unit in 2015.3. Who’s the starting running back?The Lions parted ways with veteran Reggie Bush but they have another decent talent in fifth-year back Joique Bell and a player that I believe will eventually become the Lions’ starter in underrated former Nebraska star Ameer Abdullah. Bell will start, but I expect Ameer Adbullah, a player I had rated as the No. 2 back in the 2015 NFL Draft, to challenge for the No. 1 spot by midseason if not sooner.4. Will Calvin Johnson ever be ‘Megatron’ Again?Um…no I don’t think so!Look, Calvin Johnson is still an outstanding wide receiver and he could bounce back from an injury-plagued 2014 seasons to post huge numbers this coming season. However, I think the likelihood is that Johnson now becomes something closer to a very good receiver rather than one that seemingly cam from another planet like he has for the majority of his career. 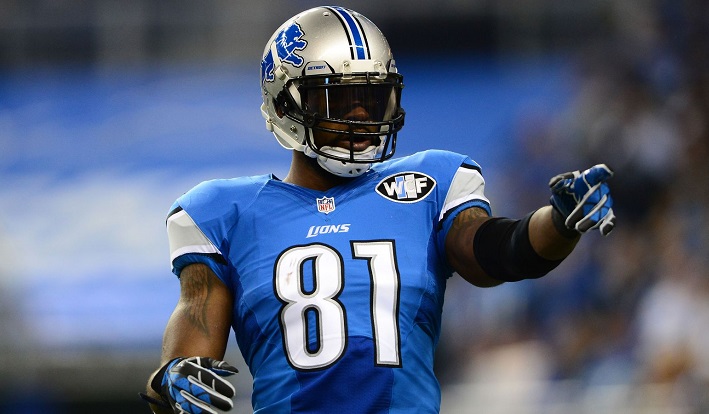 Johnson caught 71 passes last season for 1,077 yards to finish 16th overall, but he will turn 30 this September – and things just won’t get any easier for him physically as he continues to age.“It’s just a number,” Johnson said recently about his age. “It only becomes a big deal if you let it. I haven’t changed my mind-set. I still give it everything I’ve got every time.”Johnson will still be elite in 2015, but I think ‘Megatron’ is done making routine appearances.5. Are the Lions contenders or pretenders?Simply put, I believe the Detroit Lions are legitimate postseason contenders doubling as conference title pretenders. On the surface, the Lions appear to have the talent to contend for a division title and conference crown, but again, Matthew Stafford isn’t the best leader around – and his teammates seem to often following his underachieving ways.Detroit could be a playoff participant in 2015, but I don’t view them as legitimate contenders to bring home the bacon this coming season.Sources:ESPN.go.com (http://espn.go.com/nfl/player/_/id/13536/joique-bell)NFL.com (http://www.nfl.com/player/matthewstafford/79860/profile)
Older post
Newer post