NFL News and Rumors
To hear rumor tell it, a dispute over $600 is what has New York Jets quarterback out 6-10 weeks to start the 2015 online betting season. Apparently Smith owed linebacker Ikemefuna Enemkpali $600 but was mouthing off about it in the locker room. Smith was mouthing off about the debt in the Jets locker room, and Enemkpali went over and asked Smith to say what he was saying directly to Enemkpali’s face. Smith went further, putting his finger in Enemkpali’s face and telling him he wasn’t ever going to pay him the money.Enemkpali found himself released almost immediately by the Jets. Head coach Todd Bowles described the situation as “something very childish, that sixth-graders could have talked about. It had no reason for happening,” according to CBS Sports.Enemkpali would later apologize through a statement that his agent issued to the Associated Press. The statement read: “Geno and I let our frustration get the best of us, but I should have just walked away from the situation. I deeply regret and apologize for my actions. It was never my intention to harm anyone. I appreciate the opportunity I had with the Jets.”

Smith had been having a fairly good training camp, but he will likely miss the season opener against Cleveland, which sits five weeks off on September 13. It will all depend on the outcome of the surgery to repair the damage.So who picked Emenkpali up? None other than Emenkpali’s former head coach – Rex Ryan, who is now with the Buffalo Bills. The Bills claimed him off waivers off Wednesday, and then he met with team officials (including the coach) and took his physical examination.When Emenkpali came across the waiver wire, Bills general manager Doug Whaley came to Ryan and asked him what he thought about him as a player. Ryan stood up for him, and this inspired Whaley to take the situation to Bills owner Terry Pegula, in his first year of controlling the franchise. The fact that Ryan spoke so positively meant that Emenkpali was worth taking a risk on, and so the Bills claimed him off waivers. 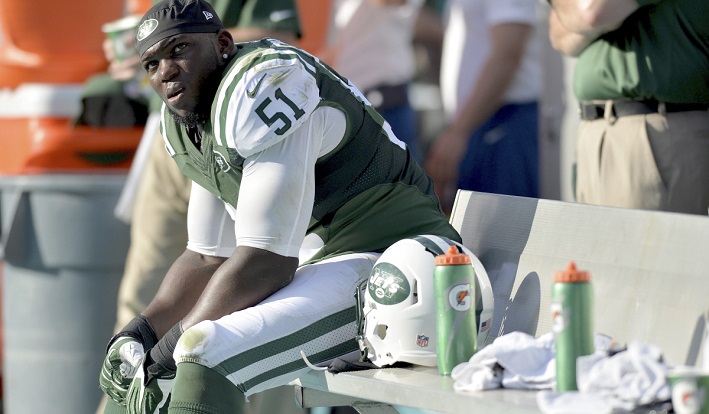 This adds to what will already be a ton of intrigue in play in the AFC Eastern Division this season. After the Jets canned Rex Ryan, the Bills were all to eager to pick up a coach who has a reputation for being a defensive genius. Even though the Jets had been lacking on offense the past few seasons, Buffalo is hopeful that they can put together a viable attack under Matt Cassel, and that Ryan’s defense will help keep opponents off the field enough to allow that attack to score some points and make the team a contender.Now when the Bills and Jets meet this season – especially after Geno Smith returns to the lineup – it will be interesting to see what kind of reception that Emenkpali gets. There are lots of fights that take place in training camp each year, although they rarely lead to this extensive an injury. There would already have been enough tension to go around in the AFC East – and now there’s plenty more.Sources:NYpost.com (http://nypost.com/tag/rex-ryan/)Wikipedia.org (https://en.wikipedia.org/wiki/Geno_Smith)
Older post
Newer post