NFL News and Rumors
During the fourth round, the New York Jets may finally have found an answer to their quarterback issues when they traded up in the draft to choose Baylor’s Bryce Petty. They only moved up one spot, trading with the Jaguars, but they were worried that other teams were trying to jump into that spot and take him. Questions have swirled around Geno Smith for some time now, and the Jets apparently aren’t convinced that he is the quarterback to carry them into the future. Let’s review how this decision will affect the rest of the team and this season’s NFL betting results.Of course, Petty has some issues of his own coming into the new season. At Baylor, Petty ran a spread offense. This means that there are no pre-snap reads; instead, the quarterback knows where he is going with the ball before the snap and doesn’t make changes. This can be problematic with NFL defenses, which are quicker and more capable of exposing that sort of offense. For now, the Jets don’t plan for him to be their starter, which puts him behind Geno Smith – at least until the Jets tire of Smith’s poor results and/or Petty picks enough to show that he is ready to be the #1 signal-caller.

Off season training at #3DQB with one of the greatest, Tom House. Read More: http://t.co/FMluu83uir pic.twitter.com/Hx9gSGTBt6

Also, Petty has already had back injuries akin to those fractures in the transverse process that sidelined Tony Romo for a few games in the 2014 season. Back injuries are one thing when you’re 34; they’re another when you’re 22. This is a situation that the Jets are going to have to monitor closely.Also on the depth chart with Petty and Smith are Matt Sims and Ryan Fitzpatrick, whom the Jets picked up from Houston. Jets coach Todd Bowles has said that Geno Smith will enter training camp as the starter but that there will be competition. Offensive coordinator Chan Gailey uses a system in which Fitzpatrick has experience, and he could move into the role of the starter.If you want to think about dominant Jets quarterbacks, you really have to go back a long way. Names such as Neil O’Donnell (who led Pittsburgh but not the Jets to a Super Bowl) or Todd Blackledge surface, and Mark Sanchez briefly showed signs of greatness before flaming out, but there really hasn’t been an elite quarterback in the green and white since Broadway Joe made his famed guarantee ahead of Super Bowl III. This is why there is such anticipation as to what Bryce Petty can do for this long-suffering franchise.  At Baylor, Petty threw for 8,195 yards in four seasons. He had 62 touchdown passes against a paltry 10 interceptions. Many talent evaluators considered Petty the third most talented quarterback in the draft, with only Jameis Winston and Marcus Mariota ahead of him. When Petty saw four other quarterbacks go before him in the draft, though, he became a real value pick for the Jets. This team just might have waited until the fourth round to find a quarterback who can get them where they want to go as the starter in 2016.Part of Petty’s learning curve will involve making those pre-snap reads and adjusting to NFL coverages. Those decisions right before and after the snap are about to become a lot more difficult. Petty realizes that, but when meeting with Gailey, he also found that the Jets will incorporate some of the same schemes and dynamics that Baylor used. 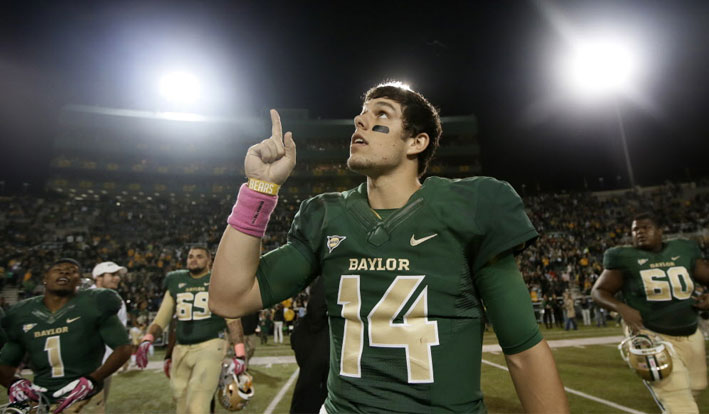 For Jets fans, the years of suffering behind the Patriots and the Dolphins may be about to ease. With any luck, Bryce Petty will turn out to be the same transcendent talent in the NFL that he was for the Baylor Bears.Sources:espn.com: http://espn.go.com/nfl/player/_/id/15864/geno-smithnfl.com: http://www.nfl.com/superbowl/history/recap/sbiii
Older post
Newer post