NFL News and Rumors
The San Francisco 49ers have been busy in the offseason and, as usual, the Niners fans are hopeful of a solid 2015 campaign, probably making more positive strides than they did in 2014. But looking at the changes made to the team, the 49ers are far from the team that was among the top Super Bowl contenders last year, currently looking like a pathetic shadow of their once strong self. So, before diving into the NFL betting odds to select the new-look 49ers in your NFL betting picks, ensure that you take your time to read the analysis and pointers given below:

In one of the worst NFL offseason moves this year, the Niners front office surprising failed to iron out their differences with Coach Jim Harbaugh, releasing a statement immediately after San Francisco’s season-ending 20-17 win over the Cards in 2014 to tell the world about the ejection of Harbaugh from his office.Harbaugh, who is now the head coach of Michigan, was a proven master of the game, boasting of having NFL’s fifth-highest winning percentage of all time (fourth-best if you only consider the modern era). In his four years with Niners, Harbaugh impressively went 44-19-1 during the regular season, and 49-22-1 when you include the postseason games. Even more notably, Jim led the Niners to three conference championship games and an appearance in the Super Bowl, making him one of the most successful coaches in San Francisco’s history.You would think that after releasing such a coach, the 49ers would at least get a better coach to take his place, if not for the team’s sake, then for the sake of trying to dupe the world that Harbaugh’s exit was necessary. None of that happened, unfortunately.In Harbaugh’s sharp role, San Francisco got the bluntest of knives in Jim Tomsula, claiming that he’d be able to make a better killing than his predecessor. If you are among those sharing in the front office’s mirage, better start adjusting your mind right to the reality on the ground because Tomsula is not going to be the guy to change the 49ers, at least not in 2015.

Tomsula, His “Legacy”, and the Staff Behind Him 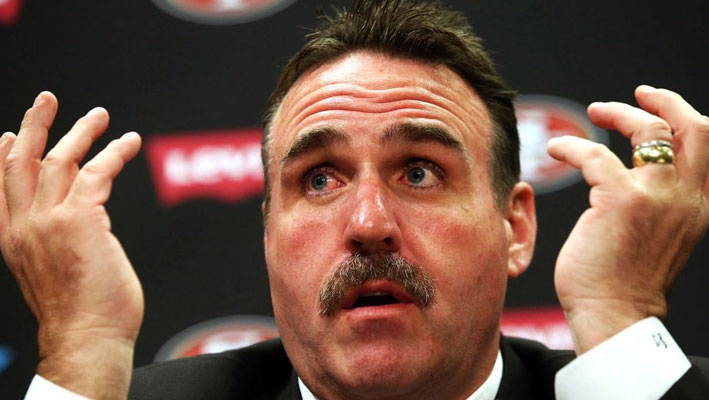 Unlike most coaches who usually come into the NFL with solid coaching legacies, Tomsula’s only worthy credentials are that he served as the Niners’ defensive line coach last season and had a brief stint as a Pro Football head coach with the Rhein Fire in 2006.In his history, Tomsula has not even served as an offensive coordinator in NFL, making him pitifully raw as far as the NFL business is concerned. His introduction as the team’s head coach was a good example of his greenness, as he looked uncomfortable talking to the media in Santa Clara, often mumbling and struggling with his answers, which made him the butt of jokes around the social media world as well as in the Bay Area.Tomsula’s assistants equally leave a lot to be desired, as none of them comes with any significant experience of coaching in the NFL. New quarterback coach Steve Logan only has the reputation of being Tomsula’s offensive coordinator with the Fire, while new offensive coordinator Geep Chryst spent two years in that role with the Chargers between 1999 and 2000.

Working with a Depleted Roster 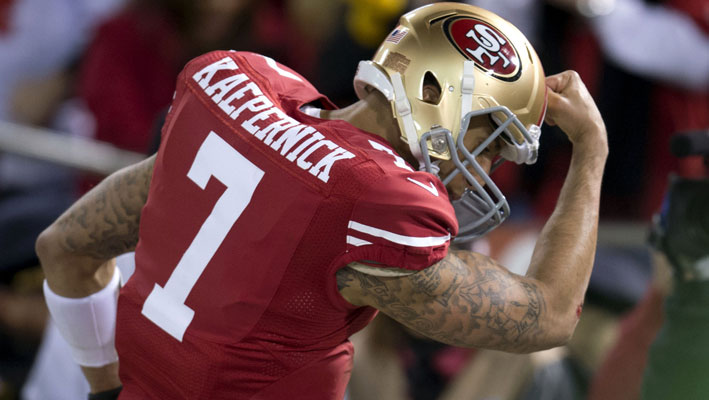 After Golden State’s first timer coach Steve Kerr (a first-timer in the NBA) led his team to the NBA Championship in his first year, maybe we can draw some parallels and give Tomsula a chance to achieve a similar feat, right? I don’t think so. The difference between Kerr (pardon the basketball example) and Tomsula is that, in Golden State, there was an abundance of talent to work with, making the coach’s job easier. In San Francisco, the squad is bleeding deeply after some key player were cut from the team, while others sensed the impending danger in the upcoming season and choose to go out the Kamikaze way—killing their careers with them.Just to mention a few, linebacker Chris Borland (107 tackles and a sack in 14 games last season), All-Pro defensive tackle Justin Smith (a 14-year veteran and a regular starter in San Francisco) and All-Pro linebacker Patrick Willis (former Defensive Rookie of the Year) retired in the offseason. Meanwhile, ace running back Frank Gore, highly rated cornerback Chris Culliver, experienced guard Mike Iupati and star wide receiver Michael Crabtree also traded out of the team in the offseason.To their credit though, the 49ers tried their best to bolster the squad, replacing Crabtree with former Raven Torrey Smith, signing former Lions free-agent running back Reggie Bush to replace Gore. Defensively, the team added tackle Darnell Dockett, possibly to replace Smith and making a few other additions to the team through the 2015 NFL draft.Even so, the entire offseason moves made by the 49ers were graded worst in the league by roster experts from ESPN. So although such experts may be wrong about a thing or two, I don’t see any reason why they would rank the 49ers poorly for no apparent reason. Added to the evident glaring issues in their roster, and the skill difference between the potential stars signed to the team and the well-proven veterans that left San Francisco, there’s no doubt that a lot of rebuilding is needed if the Niners are to be nearly as competitive as they were in 2014. 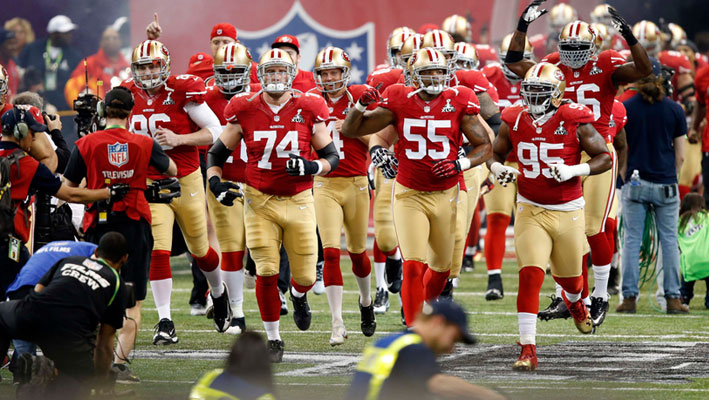 In a season or two from the 2015 NFL betting season, maybe Tomsula and his team will have figured out a few working combinations to propel the team to relevancy. It would however be a straight lie to tell you that there is much to hope for in the Niners team as far as the playoffs are concerned. At best, a couple of game by game ATS and SU picks could be sporadically available San Francisco supporters in the upcoming season, but even in such instances, the bettors will have to be careful, as the 49ers have the third toughest strength of schedule in 2015.Sources:ESPN.com: http://espn.go.com/nfl/player/stats/_/id/16748/chris-borlandPro-football-reference.com: http://www.pro-football-reference.com/coaches/TomsJi0.htm
Older post
Newer post