NFL News and Rumors
If you like taking the guesswork out of often arduous ATS picks and like to ‘keep it simple’ by making moneyline more wagers than anything else, then you’re going to enjoy the expert analysis and accompanying free moneyline pick that you’re about to get on Sunday’s NFC Championship betting showdown between the Arizona Cardinals and Carolina Panthers. Now, let’s find out who the straight-up winner of this highly anticipated pairing will be.

Why Bet the Arizona Cardinals

The Arizona Cardinals have looked like one of the two best teams in the NFC and possibly all of football this season and have great veteran leadership in quarterback Carson Palmer and wide receiver Larry Fitzgerald, not to mention a head coach that I believe is one of the top three in the game today in the beloved Bruce Arians.The Cards ranked second in scoring (30.6 ppg) and can put points on the board in a hurry with a well-balanced offense that ranked inside the top 10 in both, rushing and passing. Arizona will also be a tough out because of their stellar defense. The Cardinals ranked fifth in total defense (321.7 ypg), eighth against the pass (230.4 ypg), sixth against the run (91.2 ypg) and seventh in points allowed (19.6 ppg).More importantly, the have a pro bowl defensive tackle that can stuff the run and get after the quarterback in Calais Campbell and a pair of shutdown corner backs in Justin Bethel and Patrick Peterson that can handle opposing wide receivers one-on-one and could dominate Carolina’s modest collection of receivers. 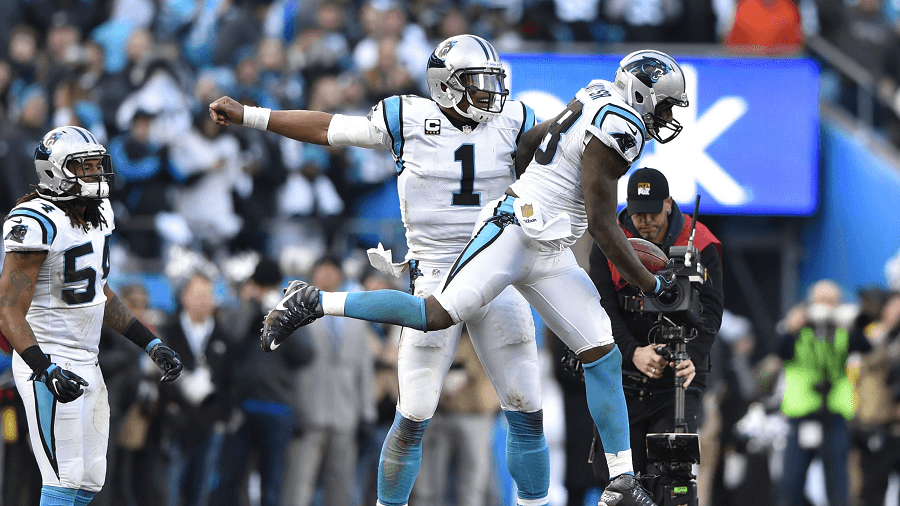 Why Bet the Carolina Panthers

The Carolina Panthers are a great bet in this contest for several reasons, starting with the fact that they’ve been perfect at home this season (9-0 SU, 7-2 ATS). Not only that, but the Panthers have the most unstoppable quarterback in the game today in dual-threat signal-caller Cam Newton.The aptly-nicknamed Superman has looked every bit an invincible as DC’s fictional legend in finishing tied for second in touchdown passes (35) and eighth in quarterback rating (99.4) while leading all quarterbacks in rushing yards (636) and rushing scores (10).Last but not least, there’s Carolina’s outstanding defense. The Panthers ranked sixth overall, 11th against the pass, fourth against the run and sixth in points allowed (19.2 ppg) while leading the league in total takeaways (39) and turnover differential at plus-20.

63 percent of the betting public likes Carolina to get the ATS win in this contest and I suspect that figure is even high when it comes to the Panthers simply getting the SU win. In either case, I believe that the NFL bettors that do like the Panthers are right on the mark. Carolina has made a habit out of ‘winning ugly’ this season and I can very well see them doing that again in this contest.Lest anyone forget, the Panthers absolutely dominated the Seattle Seahawks in the first half of their 31-24 NFC divisional round win last weekend while Arizona struggled mightily on offense before eking out a narrow 26-20 overtime win over the Packers last weekend.With the home team in this rivalry going a perfect 4-0 ATS in the last four meetings, I don’t think there’s much doubt that the Carolina Panthers are the right pick to win this game straight up.My final score prediction: Carolina 28 Arizona 24
Older post
Newer post