NFL News and Rumors
If you’re an online NFL betting enthusiast that wants to know which running backs are most likely to finish atop the league’s rushing leader boards, either in an effort to nail some player props odds or figure out which back could potentially carry their team deep into the postseason, then you’ve come to the right place!This MyBookie.ag original analysis on the five running backs that I expect to finish atop the league’s rushing leader boards, will both, inform and entertain pro football betting enthusiasts across the nation. With that said, and the 2015 offseason rolling right along, let’s get started.

Running Backs Poised to Break the NFL Odds in 2015

The under-publicized Morris has earned two Pro Bowl berths in three seasons and looks like he’s set to earn another in 2015 from where I’m sitting. The Washington Redskins star finished 11thin rushing in 2014 (1,074 yards) after rushing for 1,275 in 2013 and a whopping 1,613 yards as a rookie in 2012. While polarizing quarterback Robert Griffin III gets all of the national publicity for Washington, it is Alfred Morris that is the Skins’ best player.

The four-time Pro Bowler may have finished the 2014 season ranked a modest 13th with ‘just’ 1,033 yards, but the fact of the matter is that Charles was one of just four running backs to average at least five yards per carry last season (5.01). Charles carried the all just 206 times but still managed to top the 1,000-yard plateau for the third straight season and fifth time in the last six seasons. Charles is as versatile as any back in the game today and is still just 28-years old, leading me to believe he’s in for another monster season in 2015. Charles rushed for 1,467 yards in 2010 and 1,509 yards in 2012, so he’s more than capable of finishing fourth like I believe he will.

Now heading into his third season, Green Bay’s Eddie Lacy has it all, including power, speed and just enough shiftiness to make some opposing defenders miss. Lacy finished seventh in rushing in 2014 by rushing for 1,139 yards one season after rushing for 1,178 yards as a rookie in 2013. Lacy plays for a head coach in Mike McCarthy that still sees the value of having a powerful rushing attack that compliments incomparable quarterback Aaron Rodgers. I think it’s quite possible that Lacy reaches the 1,300-yard plateau at the very least to finish third in rushing in 2015.

Speaking of polarizing players and the name Marshawn Lynch quickly comes to mind. Whether you love Lynch or loathe him, there’s no doubt that he’s one of the best running backs in the game today. The aptly-named ‘Beast’ to pump out another fine season in 2015 after finishing fourth in rushing in 2014 (1,306 yards). Lynch has run for at least 1,204 yards in each of the last four seasons since becoming Seattle’s full-time starter to start the 2011 season. After signing a fat, new contract this offseason, I expect Seahawks head coach Pete Carroll to run the five-time Pro Bowler early and often once the 2015 regular season gets started. 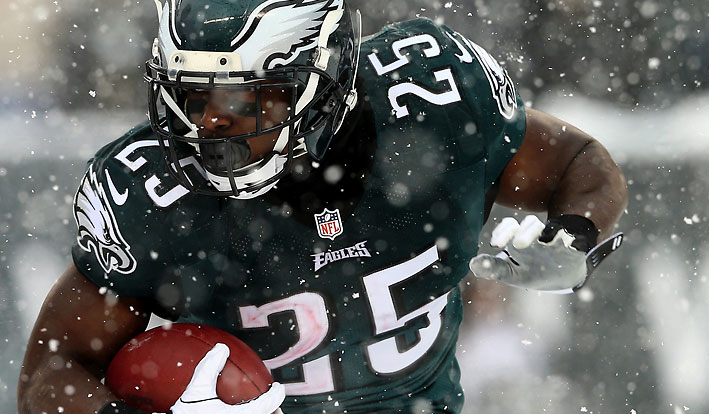 After leading the NFL in rushing in 2013 with 1,607 yards, McCoy came back to the pack a bit in 2014, finishing third with 1,319 yards. Still, the elusive running back has topped the 1,000-yard plateau in four of his six seasons in the league and I believe he’s set up perfectly to easily do so again in 2015. With the three-time Pro Bowler being traded to Buffalo where he will play for run-first head coach Rex Ryan, I’m fully expecting LeSean McCoy to lead the NFL in rushing again in 2015.
Older post
Newer post