NFL News and Rumors
The Wild Card Round served up a couple of surprises, as the road teams all managed to come away with the win. Normal service was resumed in the Divisional Round, with all four home favorites moving on to the Conference Championships. The AFC title game will see the #2 seeded New England Patriots head to Sports Authority Field at Mile High to face the Denver Broncos on Sunday, January 24 at 3:05 PM EST on CBS. Click here for our NFL betting lines.

“The blood, sweat and tears you put into it, you never take it for granted.” Tom on @WEEI: https://t.co/94M9ZIzKtM pic.twitter.com/kVcRAkWPnN

There is the possibility that the number could shift a little in the coming days, but for now, the AFC Championship Game point total has been set at 45. With Brady and Manning going head to head, it might seem as though that number should be easily eclipsed, but it is often defense that win’s championships in the NFL.

Why the AFC Championship Game Will Go OVER 45 points

It really shouldn’t be a surprise to learn that a team led by Tom Brady was in the top 3 in scoring in the NFL with 28.9 points per game. The Broncos can’t quite set that pace, but if the Patriots get out to an early lead, Denver is still well enough equipped to go toe to toe in a shootout. These two teams have already played in Denver this season, with the game total for that one set at 43 points. That game ended in a 30-24 OT win for the Broncos, which meant the OVER was pretty comfortably achieved there. That game sparked a run that saw 5 of the last 7 Patriots games go OVER, and many of those came when they were still nursing a fair number of injuries. 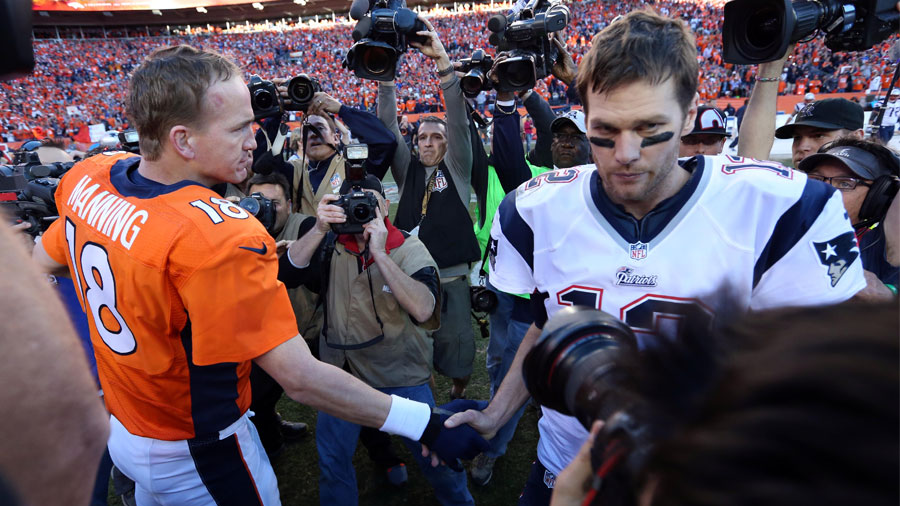 Why the AFC Championship Game Will Go UNDER 45 points

I’m sure you are all tired of hearing about how defenses win championships, but the reason that it continually gets repeated is because of how often it happens. If the Broncos are going to win Super Bowl 50 this year, they are likely going to have to do it on the back of their defensive play. They are 4th overall in points allowed per game this season at just 18.9, and it’s also worth noting that the Patriots are in the top 10 with just 19.7 PPG allowed. This is a game that features 2 of the best QB’s in the modern era, but there is always the chance that the defenses of both sides could cancel those guys out. Yes, the last meeting between these two went over, but it required OT for it to happen.

I think this game is going to end up falling very, very close to the 45-point total, and I also believe that it would once again take OT to beat it. I like this one to fall slightly under, with 41 points being where I have the total at.
Older post
Newer post