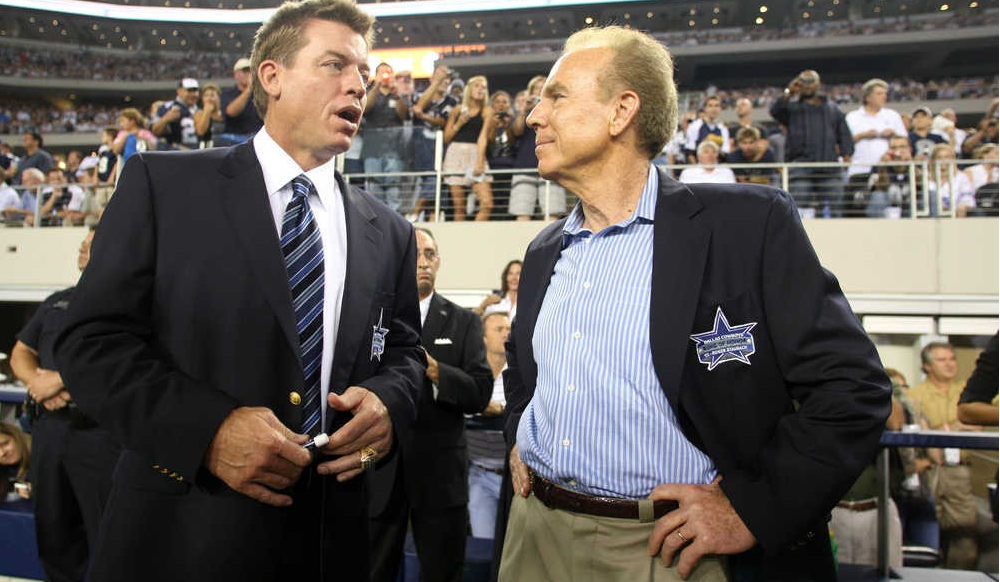 NFL News and Rumors
If you’re craving for some NFL betting action, here’s some info that will help you pass the time this long offseason then you’re in for a blast thanks to this fun-filled comparison centered around the careers of Hall of Fame Dallas Cowboys quarterbacks Roger Staubach and Troy Aikman. While one of these now-heralded signal-callers has the decided advantage in title-winning teams, picking the ‘better’ player of the two is a lot tougher than picking the guy with the most championship wins. With that said, let’s rock and roll.

Roger Thomas Staubach was born, on February 5, 1942 and is a former Heisman Trophy winner and the former starting quarterback for the Dallas Cowboys for the vast majority of 1970s. In his junior season of 1963, Staubach won the Heisman Trophy and the Maxwell Award, while leading the Navy Midshipmen to a nearly perfect 9-1 record and a final ranking of number two in the nation. In his three seasons at Navy, he completed 292 of 463 passes, with only 19 interceptions, and gained a school record 4,253 yards of total offense. 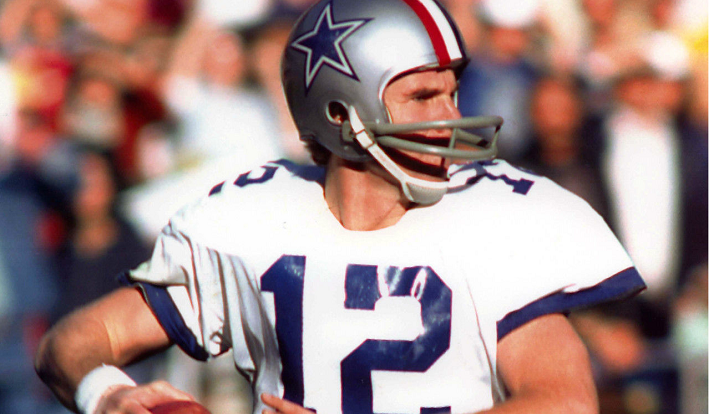 The Cowboys drafted Staubach in the 10th round of the 1964 NFL Draft, but due to his military commitment, did actually not begin playing until 1969 as a 27-year-old rookie. After graduating from the Naval Academy, Staubach could have requested an assignment in the States, but he chose to volunteer for a one-year tour of duty in Vietnam, where he served as a supply officer until 1967. He spent the rest of his naval career in the United States, playing football on various Naval service teams to prepare for his future career in the NFL.In 1969, Staubach resigned his commission, just in time to join the Cowboys training camp. The Naval academy retired Staubach’s jersey number (12) during his graduation ceremony after his senior season. In 1981, Staubach was enshrined in the College Football Hall of Fame. 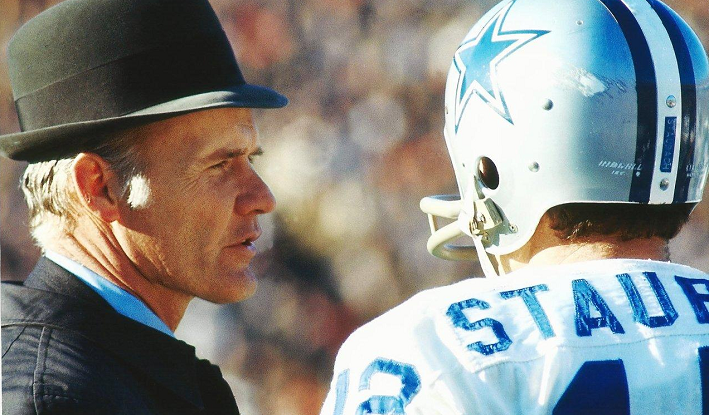 Staubach served as a backup to quarterback Craig Morton in his first two NFL seasons. In his second year, he started in several games, but Morton eventually won the permanent starting spot and went on to lead the team to Super Bowl V, where they lost to the Baltimore Colts 16-13.In 1971, Staubach assumed the full-time quarterbacking duties for the Cowboys and led them to their first Super Bowl victory, 24-3 over the Miami Dolphins. He was named Most Valuable Player of Super Bowl VI, completing 12 out of 19 passes for 119 yards and two touchdowns, and rushing for 18 yards.In 1972, Staubach missed most of the season with a separated shoulder, but he relieved Morton in a divisional playoff against the San Francisco 49ers and threw two touchdown passes in the last 90 seconds to win the game 30-28. With that performance, he won back his regular job and did not relinquish it again during his career. Staubach played with the Cowboys until 1979 under Tom Landry and was a six-time Pro-Bowler (1971, 1975-1979), and led the Cowboys to another NFL championship win in the 1977 season. Staubach threw for 183 yards and a touchdown, with no interceptions, in Dallas’ 27-10 victory in Super Bowl XII. Staubach also led the Cowboys to Super Bowl appearances in Super Bowl X and Super Bowl XIII, where they lost to the Pittsburgh Steelers both times. 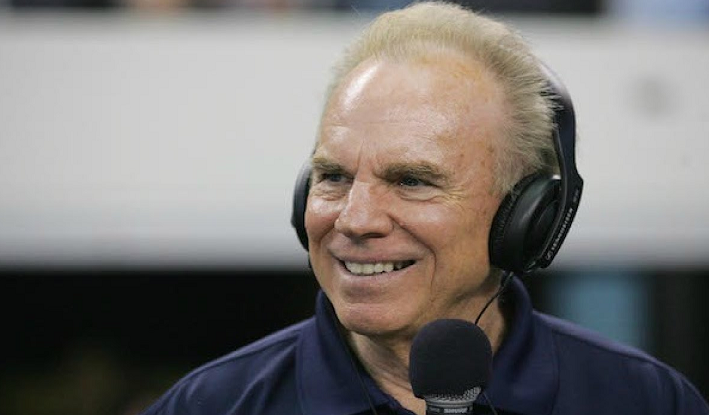 Known as “Roger The Dodger” for his scrambling abilities, and also as “Captain Comeback” for his many fourth quarter heroics, Staubach had a penchant for leading scoring drives which would lead the Cowboys to improbable victories. He led his team to 23 come-from-behind victories in the fourth quarter, with 17 of these coming in the last two minutes. Perhaps his most famous moment was the “Hail Mary Pass” in the 1975 playoff game against the Minnesota Vikings. With seconds on the clock and the Cowboys trailing 14-10, Staubach launched a 50-yard bomb to wide receiver Drew Pearson, who caught the pass and strode into the end zone for a 17-14 victory. After the game, Staubach quipped he prayed a “Hail Mary” before throwing the pass. The moment has been emblazoned in football folklore ever since, and the “Hail Mary pass” has entered the realm of football nomenclature. Staubach recorded the highest passer rating in the NFL in four different seasons (1971, 1973, 1978, 1979), and led the league with 23 touchdown passes in 1973. He was an All-NFC choice five times and selected to play in six Pro Bowls. In his final NFL season of 1979, Staubach set career highs in completions (267), passing yards (3,586), and touchdown passes (27), with just 11 interceptions. Overall, he finished his 11 NFL seasons with 1,685 completions for 22,700 yards and 153 touchdowns, with 109 interceptions. He also gained 2,264 rushing yards and scored 20 touchdowns on 410 carries. 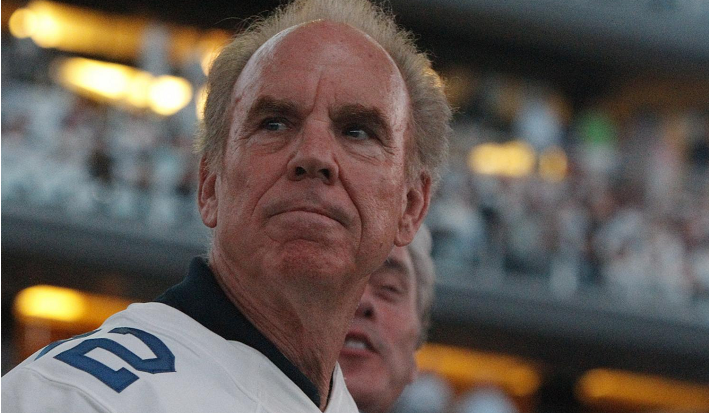 Troy Kenneth Aikman was born, on November 21, 1966 in West Covina, California, The former quarterback for the Dallas Cowboys is currently a television sportscaster for the Fox network and is also a joint owner of the NASCAR Hall of Fame Racing owner, along with – you guessed it – fellow former Cowboys quarterback, Roger Staubach. After leading the UCLA Bruins to a 20-4 record over two seasons, and wins in the 1987 Aloha Bowl and the 1989 Cotton Bowl, Aikman was the projected No. 1 overall pick in the 1989 NFL Draft, held by the Cowboys. 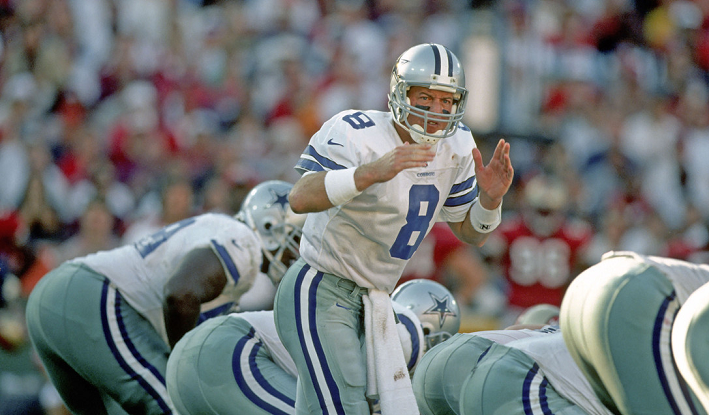 The once proud franchise had fallen on hard times, going a woeful 3-13 in 1988. On February 25, 1989, new owner Jerry Jones shocked the sports world by firing the beloved Tom Landry—the only head coach the Cowboys ever had, replacing him with Johnson, who, to no one’s surprise, took Aikman in the draft. Johnson did not develop Aikman along slowly but instead threw him into action immediately. Aikman started his first game with a 28-0 shutout loss against the New Orleans Saints. The next few weeks were not any better as the Cowboys ended up winning their only one game that year. However, when Aikman returned for his sophomore season, he showed the league why he was worthy of being picked with the first overall choice. Aikman led the Cowboys to the brink of the playoffs the following year and although his first two seasons had been a rough adjustment as he threw 36 interceptions and was sacked 58 times, Aikman showed that when a game was on the line, he could lead his team to victory as he did with game-winning fourth quarter scoring drives in six different games. In those six fourth quarter rallies, he had completed 71.1% of his passes for 456 yards and 2 touchdowns with no interceptions. 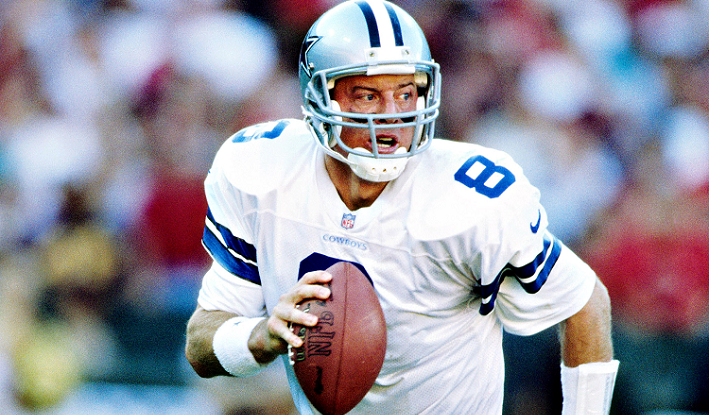 In 1991, the Cowboys made it to the playoffs and Aikman was selected to the first of six consecutive Pro Bowls. In 1992, Aikman set career highs in completions (302), passing yards (3,445) and touchdown passes (23), and led the Cowboys to Super Bowl XXVII at the Rose Bowl in Pasadena against the Buffalo Bills. Aikman completed 22-of-30 passes for 273 yards with 4 TDs as Dallas obliterated Buffalo, 52-17. He was named Super Bowl MVP. The following year, with Aikman having one of his best seasons, Dallas defeated the Bills again for a second straight Super Bowl title. It was widely expected that the team might win the Super Bowl at the end of the 1994 season, becoming the first team to win three consecutive titles. However, Jones and Johnson began having disputes regarding their own personal responsibility for the team’s success. Jones fired Johnson and hired Barry Switzer, a former college teammate of Jones’ when the two were at Arkansas.Despite the turmoil, the Cowboys almost returned to the Super Bowl but were beaten, 38-28, in the NFC Championship game by the San Francisco 49ers. The 1995 Cowboys won a record-tying fifth Super Bowl (on January 28, 1996) beating the Pittsburgh Steelers as Aikman threw for over 3,300 yards in the regular season. In 1997, Aikman became the first quarterback in Dallas history to have three straight 3,000-yard seasons. However, the team missed the playoffs and Switzer suffered the first losing season of his coaching career. Revolving-door personnel changes plagued the Cowboys for the rest of Aikman’s tenure. His pass protection failed him repeatedly as the team, stymied by the newly enacted salary cap, began a decline. On December 10, 2000, Washington Redskins linebacker LaVar Arrington sacked Aikman with such force that his head literally bounced off the turf leaving a dent in his helmet; it resulted in Aikman’s 10th concussion, the one that would end his career. 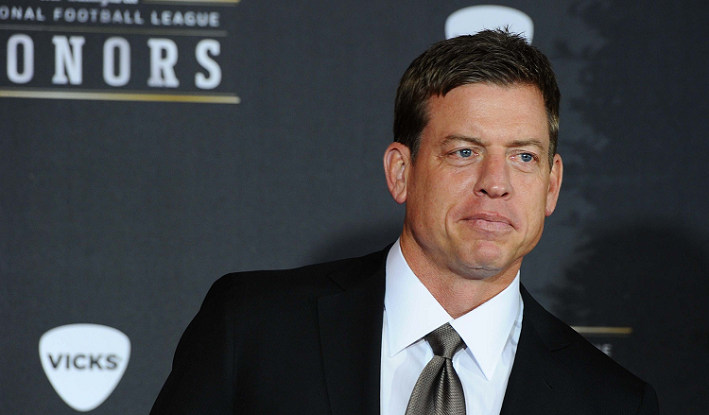 After he was waived a day before he was due a $7 million/7-year contract extension, Aikman asserted he could still play but found no interested teams. He announced his retirement on April 9, 2001 and ended his career as the Cowboys’ all-time leading passer (32,942 yards). His 90 wins in the 1990s is the most by any quarterback in any decade, and his 61.5 percent completion rate is the fourth best of all time. On September 19, 2005, at halftime of the Cowboys-Redskins game (broadcast on Monday Night Football), Aikman was inducted into the Dallas Cowboys Ring of Honor with his longtime teammates Michael Irvin and Emmitt Smith. On August 5, 2006, Aikman was one of six players inducted into the Pro Football Hall of Fame, despite repeated comments that he was merely a beneficiary of the Cowboys’ system and being paired with perennial All-Pro Michael Irvin, and future Hall of Famer Emmitt Smith.My Pick: I don’t care what anyone says, I have got to go with Roger Staubach in this comparison about which quarterback of the two was actually the better player. While Troy Aikman certainly has the better career statistics, I believe Staubach would have put up just as gaudy stats had he not been forced to miss a whopping dive years to serve the Navy. Not only that, but I genuinely believe that the Cowboys would have been better under Roger “The Dodger” than they were under Aikman had Staubach been the leader of the ‘Boys during Aikman’s 90s reign.Staubach was undeniably a much better scrambler than Aikman and had just as strong of an arm. Again, let’s not forget also that Staubach missed five whole seasons of his prime because of his military obligations. Aikman accounted for 174 touchdowns in 165 career games while Staubach accounted for 173 in only 131 contests, with 20 of those scores coming on the ground. 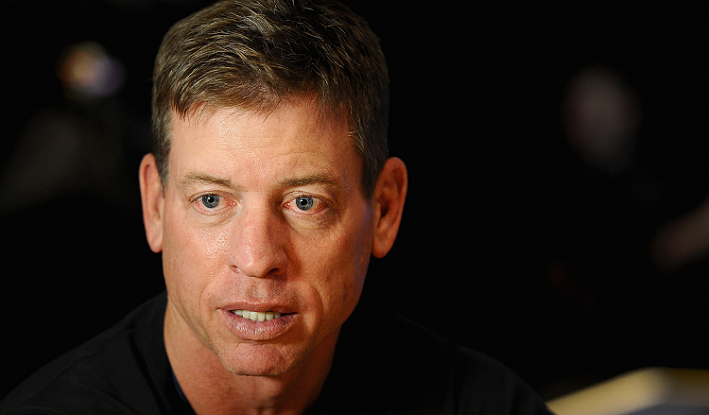 The bottom line for me when I look back at the careers of Staubach and Aikman is that Staubach played in an era when the Pittsburgh Steelers dominated the league after drafting what would turn out to be a slew of future Hall of Fame performers. Missing five whole seasons almost assuredly cost Staubach a handful of chances to win at least one or two more championships and I believe that the only thing Troy Aikman has over Roger Staubach are their career passing statistics and a couple of Super owl titles. Other than that, I would say Roger Staubach is the better quarterback every time.Sources:Wikipedia.org: https://en.wikipedia.org/wiki/Roger_StaubachNFL.com: http://www.nfl.com/player/troyaikman/2499369/profile
Older post
Newer post