NFL News and Rumors
To kick off their 2015-16 playoff campaign, the Arizona Cardinals (13-3, No. 2 seed in the NFC playoffs) will host the Green Bay Packers (11-6) on January 16th as 7-point home favorites on the NFL odds board. This Saturday NFC divisional round game, which comes on the back of Green Bay’s 35-18 triumph at Washington on Sunday, is set to start at 8:15 pm ET on NBC. In this article, we preview this exciting encounter, highlighting why the Cardinals should be your preferred choice in the NFL picks.

The last time the Packers played the Cards was in Week 16 in Glendale, a day that could easily go as one of the most forgettable day for QB Aaron Rodgers and his offense. With so much on the line for the Packers, Rodgers and his offense could only muster 8 points in a one-sided 30-point loss to Arizona. Making matters worse, Green Bay’s O-line had no answers to Arizona’s secondary, as Rodgers was sacked nine times, two of those sacks being returned for TDs by the Cardinals’ defense.And it wasn’t just in Week 16; Arizona’s defense has been solid for pretty much the whole season, finishing the regular-season campaign allowing just 19.6 PPG. And as far as Green Bay’s running back tandem of Eddie Lacy and James Starks (who combined for two TDs against Washington on Sunday) is concerned in leading the Packers’ backfield, the two backs will be facing an Arizona run defense that ranked sixth-best in the nation from the regular season.So, in short, Rodgers and his offense (in spite of doing well in the Wild Card clash vs. Washington) are guaranteed of a mountainous task in their quest to put the sort of numbers we witnessed against the porous Redskins defense.

A big reason behind Carson Palmer’s record-breaking season is the fact that he boasts of stellar weapons in both the aerial and ground attack, giving him a plethora of options to work with at any given time. For example, this Saturday he will be throwing to a proven group of receiving corps, led by Larry Fitzgerald (team-bests of 109 catches, 1,215 yards and nine touchdowns in the regular season) and John Brown (1,003 yards and seven touchdowns). As if that isn’t enough, star rookie RB David Johnson has been a beast since taking over the starting role from injured Chris Johnson. In the five games since assuming starting duties, the rookie has posted 442 yards and four touchdowns. So, simply put, the Cardinals will be far from short-handed in terms of offensive options, setting up the stage for another solid Arizona showcase.Not to mention, in the win over Green Bay in Week 16, Palmer was his productive self, throwing for 265 yards with two touchdowns, so it wouldn’t be far-fetched to expect another strong performance from him, given he already faced and beat them this season. 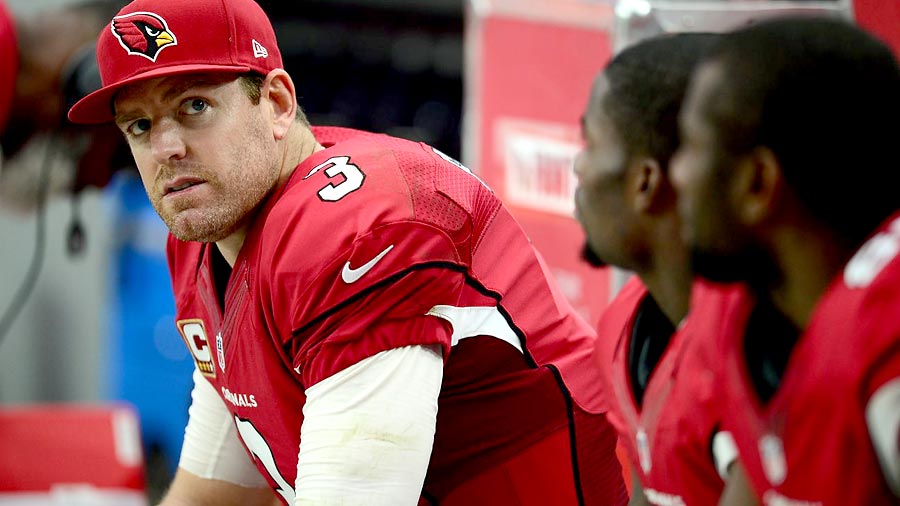 Yes, Rodgers deserves plenty of plaudits for having a good game and leading the Packers to a crucial come-from-behind win over the home-favored Redskins. The 2014-15 NFL MVP finished the game 20 of 28 for 199 yards and a pair of scores, looking much like the respected QB we’ve known him to be. But then again, if you dig through the numbers, you find that it was far from a perfect game for Rodgers. He did go 14 for 20 for 148 yards and two TDs in the second quarter alone, but this was after posting a horrifying 1-for-8 start for a measly 11 yards, including a sack and safety in Green Bay’s opening drive that resulted in two cheap points for Washington. Mind you, Washington’s defense ranked worst among the teams in the playoffs, placed 25th in passing defense (allowing 258 YPG) and ninth-worst in passing touchdowns allowed on the season (30), which places big question marks on the performance of Rodgers and his passers. Against an Arizona’s defense, which is a major upgrade to Washington’s spongy D, the Packers could be due for big struggles.In addition, whereas Arizona comes into this game with no major injury concerns, the Packers have a worryingly banged up group that is unlikely to be all healthy by Saturday. WR Davante Adams, who suffered a right knee on Sunday, joins a long list of key injuries for Green Bay, including CB Sam Shields (concussion) and LT David Bakhtiari. Without these players available or on full health, it will very difficult to go it well against the healthy and well-rested Cardinals.

In NFL betting, history rarely repeats itself, especially in the same season, so we don’t expect another blowout win for the Cards. A blowout will especially be difficult if Rodgers and his backfield play like they did in the final three quarters of Sunday’s game against Washington. That said, Arizona boasts of more prolific weapons on both sides of the ball, and after getting shocked by the Seahawks in Week 17, Bruce Arians’ boys won’t want to take any chances against the can-be-dangerous Packers. With that, we should be able to witness a well-rounded game from Arizona, so the Cards look worthy of their value as 7-point NFL betting favorites.
Older post
Newer post