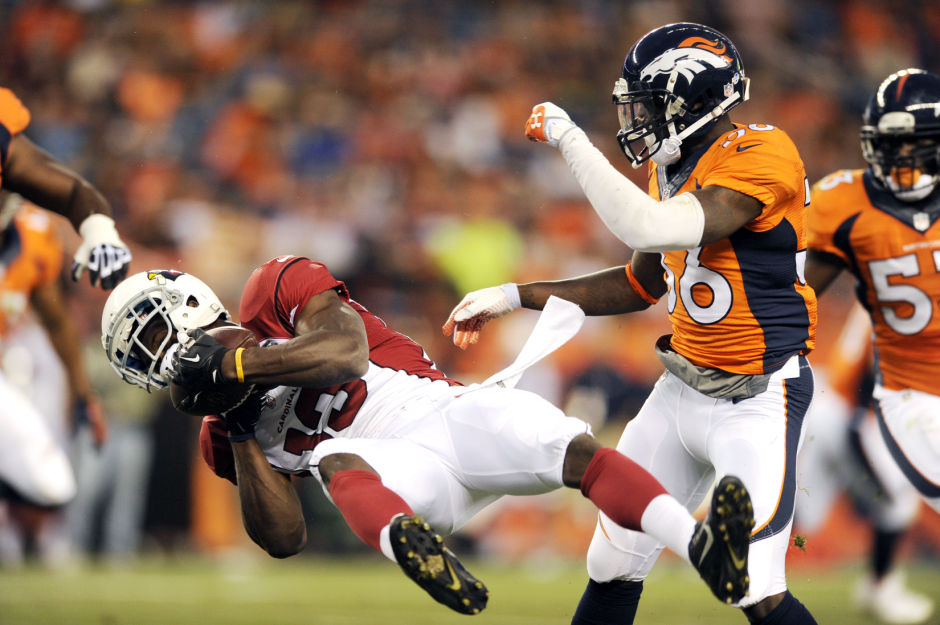 NFL News and Rumors
Week 5 of the NFL season brings an exhilarating encounter pitting 3-0 Arizona Cardinals against the 2-1 Denver Broncos. Both teams are off their respective bye weeks and are expected to be well-prepared for the face off that will take place at the Sports Authority Field in Denver, Colorado. So, will the Broncos take advantage of this and get their third victory of the season or will Arizona get to continue its unbeaten record alongside the Cincinnati Bengals? See the analysis below and a breakdown of the NFL football betting lines for this game.Despite having a team roster that is laden with many injuries and suspensions, Arizona enjoys an unbeaten 3-0 start to the season. Meanwhile, the 2-1 Denver is still looking for its first ATS victory this season and get closer to the San Diego Chargers in the AFC West.Luckily for the Broncos, Arizona’s starter QB Carson Palmer is a doubt for his team. Palmer is reported to be suffering from numbness over part of his outer shoulder, as well as weakness when he lifts his arm up and away from the body. So the Cardinals probably have to contend with his replacement Drew Stanton who, with all due respect to his talent, is not as fiery as Palmer.Game Odds:CARDINALS: +7½-110, OV 47 ½ -110, ML +310BRONCOS: -7½-110, UN 47 ½ -110, ML -380Betting on the Arizona CardinalsTwo weeks ago, the Cardinals showed what it truly means to work a team when they earned a hard-fought victory against the tough-to-go-down 49ers. A symphonic combination of opportune offense, hardworking defense and timely individual brilliance helped the team get a precious 23-14 victory against the 49ers.If Palmer comes back on Sunday, as it is wildly rumored, the Cardinals will undoubtedly have a boost in their passing attack. But even if he won’t be available, Stanton has proved that he can come through for the team when it counts most. Against the 49ers, Stanton had a 54.5 percent pass completion rate and two crucial TDs that helped propel his team to victory. Should he be called to start the game, Arizona fans can count on his industriousness to be showcased once again.Having proved itself against the dynamic offenses of three big teams—the 49ers, the Chargers, and the Giants, there is much to say about Arizona’s defense, except maybe that they should keep on with whatever they’ve been doing because it is evidently working well, at least so far.Betting on the Denver BroncosA 1-5 ATS in their last six games at home against Arizona’s 4-0-1 ATS record on the road delineates the fact that this weekend’s home advantage may not be much of a boost to the Broncos. This is further worsened by their weak defense that has allowed an average of 285.3 yards per game.However, a 17-5 SU in their last 22 games is quite remarkable, if not good enough to motivate both the fans and players for a victory. Also, in as much as they lost to Seattle, the Broncos showed their capacity to work hard in big games. A 303-yard performance through the air by QB Peyton Manning against Seattle is something the Cardinals should be watchful of. Needless to add, the Broncos have a host of athletic talent in players like Demaryius Thomas, Emmanuel Sanders and Julius Thomas. Given a chance, the athletic trio, plus Manning, can be very dangerous to any team.PredictionThis is a tough one. The existing NFL betting odds favor the Broncos, but I expect a close game and a win by less than 7.5 points.  Denver is playing at home, but the Arizona Cardinals will use their superior offense and strong defense to thwart Peyton and his teammates. My prediction: The Cardinals will eventually carry the day and continue their unbeaten winning streak.
Older post
Newer post