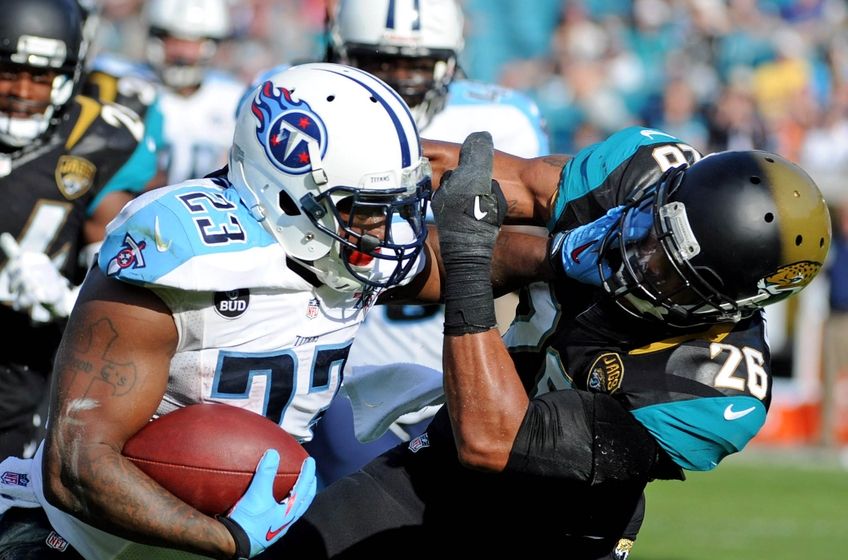 NFL News and Rumors
Pretty much everything has been going wrong for the Jaguars this season and they will be looking for redemption with a first season win when they face the Tennessee Titans at the LP Field in the Music City. Whereas the Titans have not been as mediocre as the Jaguars, they’ve also not had the best of starts, winning one out of the five games played this season. On Sunday, these two teams, which are currently ranked between the worst in the NFL, will have an opportunity to give their fans something to smile about, if not change the below-the-par statistics they’ve recorded this season. Which of these two struggling teams is most likely to scrape through with a win and maybe change their dismal trends in the NFL betting odds and lines?

Betting on the Jaguars

A 0-7-1 ATS and an eight-game losing SU losing streak dating back to last season emphasizes just how bad the Jaguars have had it in their camp. Rookie QB Blake Bortles has been doing his level best for the team, I believe, but he is yet to be as good as he was during the preseason. His woes this season are further worsened by the team’s poor support from the rushing attack combination of Toby Gerhart and Denard Robinson who have been equally blunt.In their defense, Paul Posluszny leads with 53 tackles, with Andre Branch and Alan Ball chipping in some sacks and interceptions. But in overall, the defense is far from formidable. It is no wonder Jacksonville has a dreadful minus six (-6) turnover ratio.The only ray of hope for the Jags has been receivers Allen Hurns and Allen Robinson who have been quite lively in the absence of Justin Blackmon (year-long injury) and Marquise Lee (has missed three games due to a hamstring injury). But even these receivers have been guilty of several drops and penalties that have hampered the industrious offensive efforts of players like Bortles.In spite of all these problems, the 0-5 Jaguars claimed a 29-27 win against Tennessee last season. If they are to get such a win, they need to capitalize on their pass rush, which has been relatively good this season. Holding the Steelers to a total of 372 yards and 17 points also shows that the team’s defense can show up, if need be. With an improved defense, better attack and a big slice of luck, the Jaguars could get their first victory of the season,

Betting on the Titans

For the Titans, losing 29-28 after they’d worked hard to lead the game 28-10 in the first half is simply ludicrous. You cannot expect to win games in the competitive NFL when you are not able to protect an 18-point lead. That being said, Tennessee fans will be hoping Jake Locker is available on Sunday after he injured his thumb in last week’s game.Completing 8 of 11 passes for 79 yards and a TD while scoring an 11-yard TD run was indeed a commendable performance from Jake. The player is however questionable for the weekend, but confirmations will be made after he undergoes an MRI on his thumb. In his absence, QB Charlie Whitehurst will get a start. Last week, he had an average performance and the fans will hope for a better play from him if he starts on Sunday.Defensively, cornerback Jason McCourty and safety Michael Griffin are quite good at causing timely turnovers and forcing interceptions. A 1-5-1 ATS against AFC South opponents since 2013 is not a great record for Tennessee, but if running back Shonn Greene can help spearhead his team’s ground play, a victory looks most likely for the Titans on Sunday.The NFL lines for this game still pending,  however, the Titans are favored by Vegas oddsmakers by 4-point5. I predict the Jaguars will go 0-6 and that strong pass-play, hopefully boosted by the availability of Locker, will help the Titans end their four-game losing streak in a low-scoring game.
Older post
Newer post