NFL News and Rumors
If you’re a Washington Redskins Premium Club Member and NFL betting fan, then you may be scratching your heads about a letter you may have just gotten in the mail. The opening sounds nice, as the Redskins are thanking you for continuing to support the team loyally. However, the letter also talks about a nucleus of players who will drive the team’s success: Ryan Kerrigan, Alfred Morris, Trent Williams and DeSean Jackson.Which player doesn’t appear in that letter? That’s right – Robert Griffin III. This is a player who, not long ago, was the focal point of the Redskins identity (not to mention the offense). He took the Redskins to an unlikely playoff berth in his first season, only to go down to a knee injury from which he still doesn’t seem to have fully recovered. He still doesn’t show the same confidence in his mobility that he did in that first season, and his conflict with head coach Jay Gruden has become public in a way that can’t be good for team chemistry.But how can DeSean Jackson help the team get out of its malaise? By going back to his dominating form as a wide receiver. Jackson was known for torching defenses during his days as a Philadelphia Eagle, and by getting open and making plays on balls from RGIII, he can stretch opposing defenses. If Jackson and the rest of the Redskin receivers can strike first on hot route moves, opposing defenses will have to moderate their rush, giving Griffin more time to throw.  Ryan Kerrigan had some stout statistics for the Redskins last year, racking up 13.5 sacks during the season and forcing a key fumble in a late-season game against the Philadelphia Eagles. Averaging almost a sack a game allows him to wreak havoc on opposing offenses. If he can continue to make the types of plays that shorten drives for the opposition, he’ll be helping the offense get the ball more often – and the more chances RGIII has to bring the ball down the field, the more the Redskins will have a chance to put points on the board. 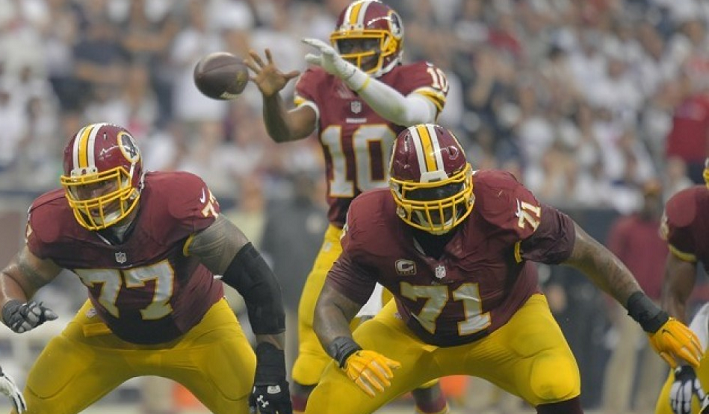 Trent Williams is an important linchpin in the offensive line that will either give RGIII the time he needs to find receivers down the field or will allow opposing pass rushers to penetrate the backfield and make the passing game chaotic. An All-American while playing for the University of Oklahoma, Williams has built up a strong reputation in Washington both for his pass protection and run blocking. Doing the same this season will help the Redskin offense stay on the field.Alfred Morris is the featured running back in the Washington Redskins offense. While he sputtered a bit near the end of the season, only running for 175 total yards in the team’s last three games, he did run for over 1,000 yards in the 2014 regular season, including eight touchdowns. If Morris can do a better job of hitting the holes (meaning that the offensive line needs to do a better job of opening them as well), the offense will take on more than one dimension, unleashing Griffin to throw the ball down the field or take off on his own when the coverage is there.Sources:ESPN.go.com (http://espn.go.com/nfl/player/_/id/14875/robert-griffin)NFL.com (http://www.nfl.com/player/trentwilliams/497073/profile)
Older post
Newer post