NFL News and Rumors
Every year, you’ll hear some criticism of the different draft choices that some of the teams in the NFL make. However, in 1982, the Tampa Bay Buccaneers actually picked the wrong player. No, they didn’t choose a player who turned out to be a bust – instead, they actually picked the wrong player.The Bucs contributed plenty to the drama that marked the NFL betting fans during the 1970s. They lost 26 games in a row between 1976 and 1977, and then they kept their woeful ways going into the 1980s, allowing quarterback Doug Williams to leave town in 1983 and to pick Bo Jackson (who liked baseball more than football) with the first overall draft choice in 1986. However, their choice in the 1982 draft was just another nail in the coffin that would trap the Bucs from 1983 to 1984, when they lost at least 10 games each year. In 1982, the Buccaneers chose Sean Farrell with the #17 pick in the first round. But they didn’t mean to.Originally, the Bucs were considering three players with that pic – Booker Reese, a defensive end from Bethune-Cookman; Mike Munchak, an offensive lineman from Penn State; and Farrell. However, the Houston Oilers picked up Munchak with the #8 pick in that first round, leaving the Bucs with Farrell and Reese on their board. Farrell was seen as the more polished player, ready to go right into NFL action, but Reese was seen as having a higher athletic upside, particularly when it came to rushing the quarterback. Tampa Bay already had one dominant defensive end in Lee Roy Selmon, and they liked the idea of putting Reese on the other end, especially after they saw his 4.68 time in the 40-yard dash at the combine. 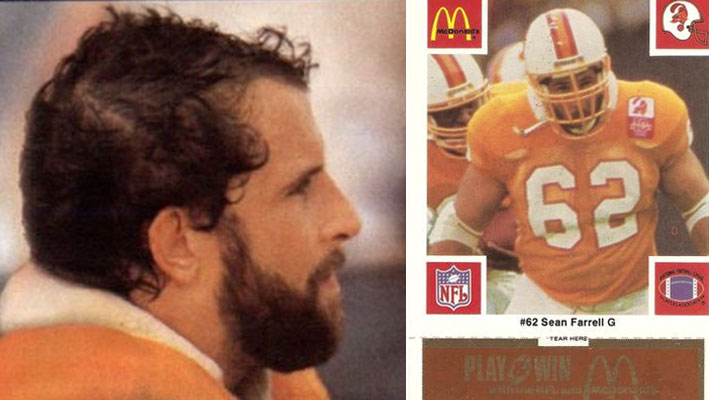 As the Bucs’ pick approached, Tampa Bay equipment manager Part Marcuccillo, who was representing the team at the draft in New York City, was told to write down two names – Reese and Farrell – and then wait for instructions. In Tampa Bay, the men in the draft room were arguing back and forth until there was only about a minute left in the Bucs’ window – 15 minutes – in which they could announce their selection. The team was communicating with Marcuccillo by speaker phone, and there was a lot of background noise in New York City. So when the general manager told Marcuccillo, “We’re not going with Sean Farrell, we’re going with Booker Reese. Turn it in.” However, the equipment manager only heard patches of the sentence, and time was ticking down, and so he went and turned in the wrong name.Back in Tampa, the draft committee was watching the draft on ESPN. When commissioner Pete Rozelle walked to the podium and announced Sean Farrell’s name as the 17th pick, everyone – up to owner Hugh Culverhouse – was livid about what had just happened. Then they ordered Marcuccillo to go to the podium and try to take the pick back, but the commissioner wouldn’t have it. Once a pick was turned in and the time expired, that was that. 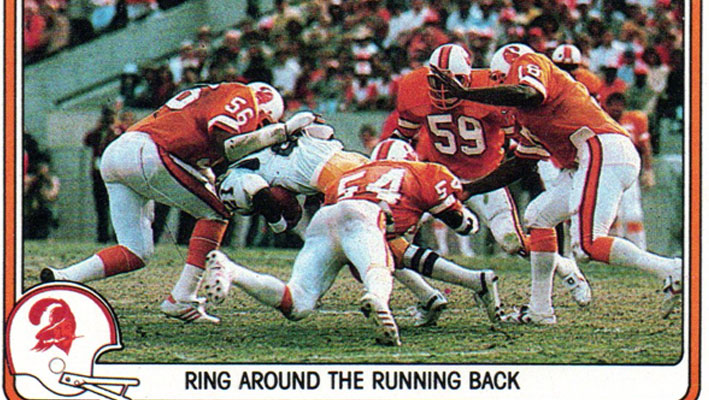 Farrell turned out to be a pretty good player in Tampa Bay, starting on the offensive line for five seasons (a total of 59 games). After those seasons, though, he announced at a press conference that he wanted out – and the team traded him to New England. And what happened to Booker Reese? The Bucs traded away their first round pick the next season (1983) to get the Bears’ second-round pick and snag Reese. Unfortunately, Reese washed out after a couple of seasons. All in all, this is a typical tale of the Bucs’ bumbling 1970s and 1980s.Sources:SI.com: http://www.si.com/longform/nfl-draft-82/index.htmlNYtimes.com: http://www.nytimes.com/1994/08/26/obituaries/hugh-culverhouse-75-owner-of-the-buccaneers.html
Older post
Newer post