NHL Betting News
Ask anyone who follows hockey about the playoffs and they will tell you that more often than not it’s the team with the hot goaltender that has the best chance of success. Using that though process, how are we then supposed to separate the Washington Capitals and the New York Rangers, both of whom have a goalie who is playing lights out in the postseason? The answer might become a little clearer once NHL betting on Game 4 is over and done with on Wednesday night.

The Rangers used an almost perfect balance of offense and defense on their way to the President’s Trophy during the regular season. They were top 3 in goals scored and goals conceded, yet many viewed them as an unlikely winner of the Stanley Cup. The Rangers set out to prove everyone wrong, disposing of the Pittsburgh Penguins in 5 games, and only giving up 8 goals in the process. While the defense was solid in the opening round, the offense sputtered a little, as the Rangers won their 4 games all by the same 2-1 scoreline. It has pretty much been more of the same in the second round against the Capitals, and the Rangers now have their backs against the wall, 2-1 down after the first 3 games. Henrik Lundqvist has been stellar between the pipes, but has had little support from his offense, with the latest loss being a 1-0 defeat on Monday night. 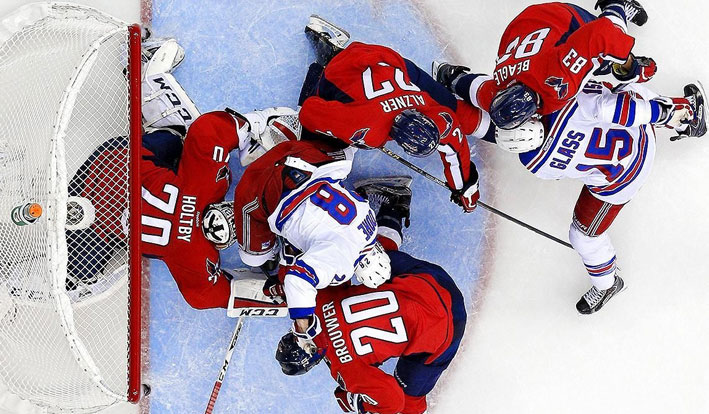 The Capitals can take a real stranglehold on this series with a win on home ice on Wednesday night, but they have only been able to string back to back wins together once so far in the postseason. The Caps finished the regular season in the top 10 in both offense and defense, but it was their number 1 ranked power play that propelled them to the playoffs. That PP is just 3 for 18 in the playoffs, and only 1 for 5 versus the Rangers. In fairness, the Rangers have a hot goalie of their own in the form of Braden Holtby. He has only given up 4 goals in the 3 games in this series, yet somehow still finds his team behind the 8-ball heading into the crucial Game 4.

This is a series that looks destined to go the full 7 games, which is why I believe that the New York Rangers will tie the series up on Wednesday night. This really is a coin flip, though, as all three games have been decided by a single goal. The UNDER may well be the bet to make in this one. SourcesNBCsports.com (http://prohockeytalk.nbcsports.com/2015/04/07/rangers-clinch-presidents-trophy/)NHL.com (http://www.nhl.com/ice/standings.htm)
Older post
Newer post