NHL Betting News
There are a number of different ways to make it into the NHL playoffs. Some teams power their way in by being dominant all season long, while others find a little bit of magic late in the season in order to get in at the last second. The latter group often finds a way to use that momentum to spring a first round surprise, which is what many thought the Ottawa Senators might be able to do against the Montreal Canadiens. Game 4 of the series goes on Wednesday night in Ottawa and here’s an online betting preview to help you wager it.

Date: Wednesday, April 22, 2015Time: 7:00PMVenue: Canadian Tire CentreOpening Line: Ottawa -110The Senators put in one of the most exciting final months in history, coming from behind and finding ways to win games that they had no right being in. They really did start to look like a team of destiny, but the magic looks as though it has run out in the playoffs. All three of the games in the opening round have been decided by a single goal, with two of them going to OT. The bad news for the Senators is that they did not end up on the winning side once, and are now on the brink of being swept. The law of averages did suggest that their luck would run out at some point, and it looks as though that may well be the case now. 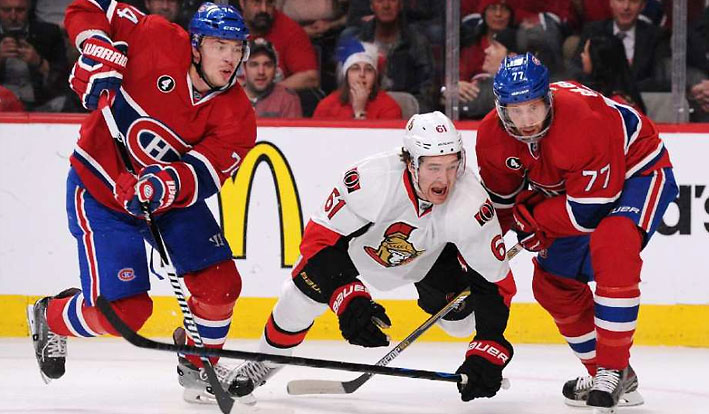 The Montreal Canadiens knew that they were in for a fight in this series, and they have certainly been put through the wringer by the feisty Senators. The Habs were able to hold on in Game 1 to escape with a 4-3 win, and then followed that up with a 3-2 OT win that put them in the driver’s seat in the series. The Senators made a switch in net for Game 3, going with Craig Anderson in place of Andrew Hammond, and it almost paid off. Anderson stopped 47 of 49 shots, yet still ended up on the losing side, as the Canadiens escaped with a 2-1 OT win. It’s going to be interesting to see who gets the start between the pipes in what might be the final game of the series.

As much as the Canadiens would love to get this series over and done with on Wednesday night, I think the Senators still have a little bit of fight in them. I like Ottawa to win this one and send the series back to Montreal for a Game 5.
Older post
Newer post