ATP & WTA 2021 US Open Betting Update: Raducanu and Fernandez into The Finals 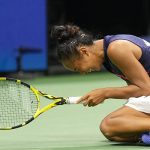 Mybookie returns with the daily 2021 U.S. Open betting update, where we provide you with an update of everything there is to know about the ongoing Grand Slam tennis tournament. Today, we focus on the women’s finals match between Emma Raducanu and Leylah Annie Fernandez, who will clash in the grand finals on Saturday, September 11.

2021 Wimbledon from The Championships, Wimbledon

From the game’s legendary greats like John McEnroe and Pete Sampras to today’s more modern superstars like Roger Federer and Rafael Nadal, tennis fans, players and betting enthusiasts everywhere know there is nothing quite like lacing it up at the legendary All England Lawn Tennis and Croquet Club for the world’s oldest and most prestigious tournament there is – The Wimbledon Championships!

Whether you love betting on the game’s top favorites or you’re keeping an eye on the up-and-coming stars of tomorrow on both the ATP and WTA world tours, you can get all of your racket-betting action fulfilled at MyBookie!

Australian Open, French Open, Wimbledon and the US Open

We’re back with another daily 2021 Wimbledon tennis update, where we take a look at the recent events, results, and upsets at the third Grand Slam tennis tournament of the year. As any round before, Day 5 of Wimbledon has produced quite a few interesting results, which we will cover to provide you with all the needed information for you to bet on Wimbledon betting odds.

World no.29 Karen Khachanov beat Frances Tiafoe in straight sets on Friday, July 2, to produce one of the day’s biggest upsets. Khachanov entered the match as a +120 underdog yet proved all the doubters wrong with a straightforward victory.

The 25-year-old Russian proved himself as a formidable opponent from the get-go, keeping Tiafoe on his toes throughout the first set. The two went back and forth until the Russian found his footing in the seventh game when he took a 4-3 lead and needed only two more games to seal the deal at 6-4.

The following sets proved to be much closer, albeit, despite his best efforts, Tiafoe was unable to catch up to Khachanov. The latter won the final two sets of the day with 6-4 to secure his career-first Wimbledon 1/8 finals appearance.

The Russian has previously done well at English grass courts, reaching R3 twice (2017, 2019) and R4 in 2018. He is now only one step away from matching his career-best Grand Slam placement – quarter-finals at the 2019 French Open.

For Tiafoe, this loss marks yet another early exit from Wimbledon. He has never made it past R3 in England and crashed out from the first round in 2019.

Iga Swiatek beat world no.79 Irina Begu in straight sets to advance into the next stage of the 2021 Wimbledon. The 20-year-old entered the match as a heavy betting favorite, and she didn’t need much to prove just how much better she is.

The Pole won the match with 6-1, 6-0, facing zero to no resistance from the 2018 Wimbledon doubles quarter-finalist in her first head-to-head bout with the Romanian.

With this win, Swiatek further solidified her name as one of the most promising up-and-coming tennis players. She has already won the 2020 French Open and added a quarter-final appearance earlier last month, which is an impressive feat for a player who has been in the scene for barely three years.

Swiatek attended Wimbledon only once, in 2019, when she got eliminated in R1 by Viktorija Golubic (2-6, 6-7). The Pole has already secured her career-best placement at All England Lawn Tennis & Croquet Club and now has her eyes set on her second Grand Slam title.

Karolina Pliskova is by no means one of the main betting favorites to win the 2021 Wimbledon, but with the form she has been showing of late, her opponents should keep an eye on her. Pliskova ended another day with a commanding victory; this time, her victim was world no.87, Tereza Martincova.

The two fought it out on the All England Lawn Tennis & Croquet Club on Friday, July 2, for just north of 1:30 hours, and not once during that time did it seem like Pliskova wasn’t in full control.

The 29-year-old Czech has stumbled a bit in the first set, allowing Martincova to tie the series at 1-1, but once she gained the lead, Pliskova never let go of it. She won the first set with 6-3 and emulated that success in the final set of the game.

By making it into the 1/8 finals at 2021 Wimbledon, Pliskova locked in her best Grand Slam placement of the year. She finished the 2021 Australian Open in R3 and failed to make it past R2 in France. She is now through to the R4, matching her Wimbledon placements from 2019 and 2020.

Martincova’s quest for her first Grand Slam title ended today, but she can be happy with her performances. The 26-year-old has reached her career-best Grand Slam placement, having crashed out in R2 in France, and suffered four R1 eliminations from Wimbledon (2019) and US Open (2017, 2019, 2020).

Posted: Thursday, July 1, 2021 11:36, EDT
MyBookie is back with another daily 2021 Wimbledon update. Here we take a look at what has happened, which underdogs delivered, and who of the main favorites to win the trophy has justified his tag as the ones to beat. Like in the opening two days of 2021 Wimbledon, Day 3 hasn’t lacked exciting moments for us to cover on Read More

ATP & WTA 2021 Wimbledon Betting Update: Andreescu and Anisimova Out of the Tournament

Posted: Wednesday, June 30, 2021 11:54, EDT
Another day has passed in Wimbledon, and we’re back with our daily 2021 Wimbledon update, where we look at what has happened on the English grass tennis courts, which players performed up to expectations, and which big names under-delivered. To no one’s surprise, Day 2 of 2021 Wimbledon has produced quite a few memorable moments, and while some of those Read More

ATP & WTA 2021 Wimbledon Betting Update: Evans, Jabeur, and Pliskova Through To Next Round

Posted: Tuesday, June 29, 2021 12:19, EDT
Tuesday, June 29, marked the second round of Wimbledon – the first since 2019, and much like its first round of play, it had to deal with unfortunate weather conditions. And while the English weather has left quite a mark on this year’s iteration of Wimbledon, it was the day two upsets and strong showings from the favorites that are Read More

Posted: Monday, June 28, 2021 9:56, EDT
MyBookie brings you Wimbledon 2021 updates, where we take a look at what has happened in the days leading to the third Grand Slam of the year and who is favored to hoist the trophy in July. The Grand Slam tennis tournament has yet to begin, which gives us a little more time to take a look at which players Read More

Posted: Friday, June 25, 2021 11:20, EDT
The 2021 Wimbledon Championship is slated to kick off on Monday, June 28, at All England Lawn Tennis and Croquet Club, where some of the best men and women tennis players will square off for the largest slice of £35,016,000 and the prestigious tennis Grand Slam title. As we get closer to the third Grand Slam of the season, it’s Read More

Posted: Tuesday, June 22, 2021 3:06, EDT
Wimbledon is almost here! Roland Garros came and went, with some surprise on the women’s end, and Novak Djokovic claims another title on the Men’s side. This year’s tournament will feature a chance for Djokovic to win his 20th major to tie both Nadal and Federer with that number. And now that it’s upon us again let’s look at some Read More

Posted: Tuesday, June 15, 2021 2:28, EDT
As one of the four Grand Slam tennis tournaments, Wimbledon is one of the biggest and most exciting events on the calendar for every tennis fan around the globe. Featuring the cream of the crop of the tennis world, Wimbledon never fails to amaze. This year’s Wimbledon is set to begin on June 28 on the premise of the renowned Read More

Posted: Friday, July 12, 2019 9:26, EDT
Two of the best women tennis players on the planet throw down when active legend Serena Williams takes on Simona Halep in the 2019 Wimbledon Women’s Finals. The match takes place at the All England Club on Saturday, July 13. Will Serena rediscover her championship form? Or, will Halep win her second major of her career? Check out the 2019 Read More

Posted: Thursday, July 11, 2019 10:27, EDT
Tennis’s Big 3 easily disposed of their rivals in the Wimbledon Men’s Quarterfinals on Wednesday. The Big 3 now march into the semifinals on Friday looking for a spot in this Sunday’s trophy match. In the first battle, Roberto Bautista-Agut looks to beat the seemingly unbeatable Novak Djokovic. In the second match, Roger Federer takes on rival Rafael Nadal. Who Read More