NBA News and Rumors
Online betting basketball enthusiasts are in for a treat tonight, as Friday’s NBA betting lines and odds present us with a set of juicy matchups. Read on below for a game preview of our select top games of the night, complete with free NBA online betting picks. And while you are at it, don’t forget to check out our NBA section for a separate analysis of the top-heavy clash between defending NBA Champs, Golden State Warriors, who will be visiting Houston tonight for a rematch of last year’s Western Conference Finals series. 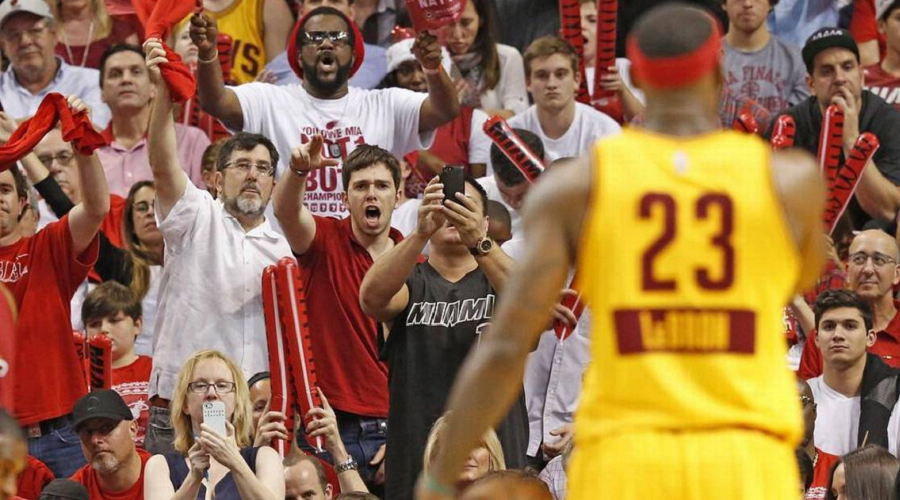 In a reunion that will feature LeBron James Dwayne Wade and Chris Bosh all on the same court in a competitive game for the first time since James left Bosh and Wade in Miami to join Cleveland, there’s definitely a lot to look forward to in this game. All that side court chatter and friendliness aside, Cleveland will continue to play without the recuperating starting duo of Kyrie Irving and Iman Shumpert, so they’ll need LeBron and Kevin Love to be at their best, supported with their solid bench that hit 13 3-pointers and scored an impressive 50 points in the 106-76 rout of the Grizzlies on Wednesday, a day after the Cavs had lost 97-95 to Chicago in their season opener. 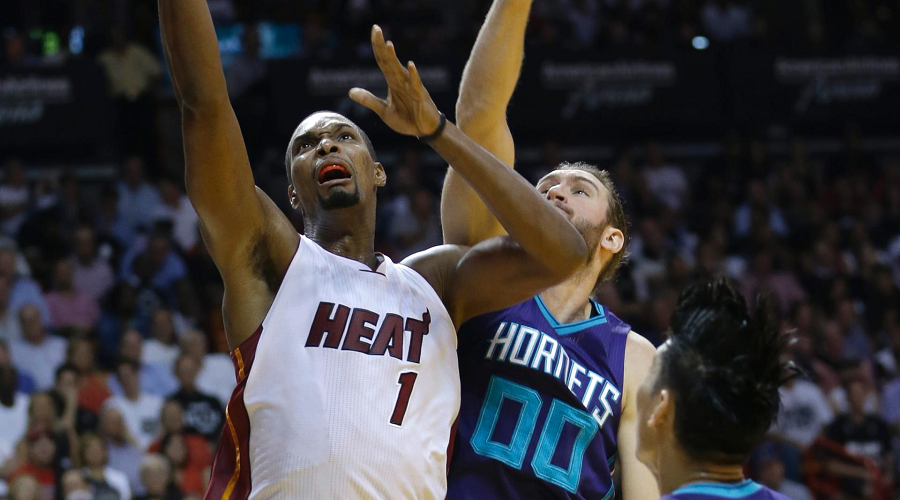 The Heat, meanwhile, are coming off a 104-94 season-opening home win over Charlotte, a game that saw Bosh score a game-high 21 points in his return from a long-time injury layoff from last season. The Heat team scorched up 12 of 20 3s in that opener, a great improvement after the team finished 24th in 3-point percentage (33.5) last season. Gerald Green, who led Miami by knocking down 5 of 8 three-pointers off the bench, will need to do more of the same if the Heat are to avoid getting walloped by the three-point happy Cavaliers.

Heat at Cavaliers NBA Odds Predictions: After James, Wade and Bosh exchange pleasantries at the start of the games, the two teams get embroiled in a heated battle on the court, with Love and James helping the Cavs to outlast the Heat in a win plus cover performance, along with an OVER total. 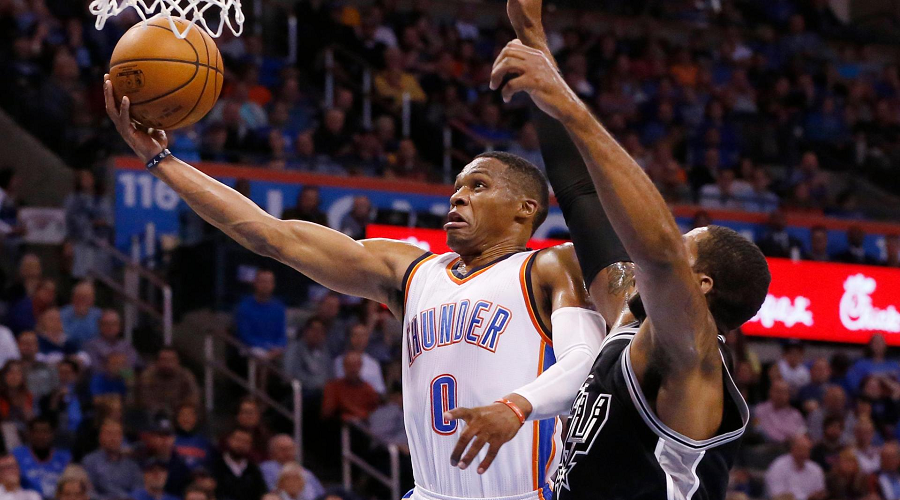 After dispatching the San Antonio Spurs in Oklahoma during their Wednesday season-opening game, Russell Westbrook and Kevin Durant (who will be playing his second game of the season after missing massive time last year) will be hoping to lead OKC to its second victory of the season. Given that Orlando is likely to keep Durant (22 points vs. Spurs) and Westbrook (game-high 33 points and 10 assists vs. Spurs) heavily guarded, the likes of Dion Waiters and Serge Ibaka will need to get into a scoring mood to help alleviate pressure from their two All-Stars. 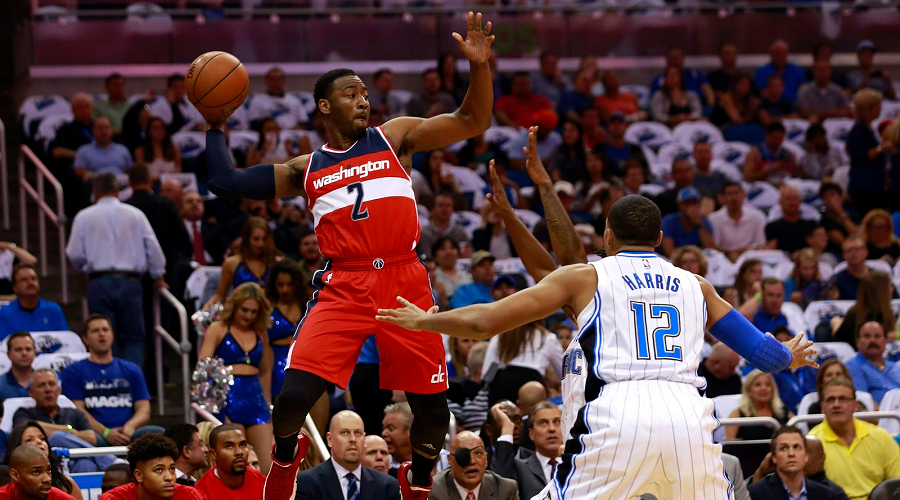 Unlike OKC’s Billy Donovan who got his managerial era to a winning start, Orlando’s new head coach Scott Skiles couldn’t provide magic to his team, falling to a heartbreaking 88-87 loss to Washington at the Amway Center, thanks to a John Wall floater with 12.7 seconds remaining on the clock. That said, Orlando showed a lot of fighting spirit in that loss, led by Elfrid Payton, who nearly had a triple-double by finishing the game with 11 points, 10 rebounds and eight assists. If the offense can increase its field goal conversion rate (which was dismally at 37 percent against the Wizards), and the defense takes advantage of OKC’s turnover-prone game (they had 19 giveaways against Spurs), then an upset or even a cover of the spread could be possible for Orlando.

Thunder at Magic NBA Odds Predictions: Westbrook and Durant explode for another fine display, leading the Thunder to a comfortable win and cover of the spread, with the total looking to go OVER. 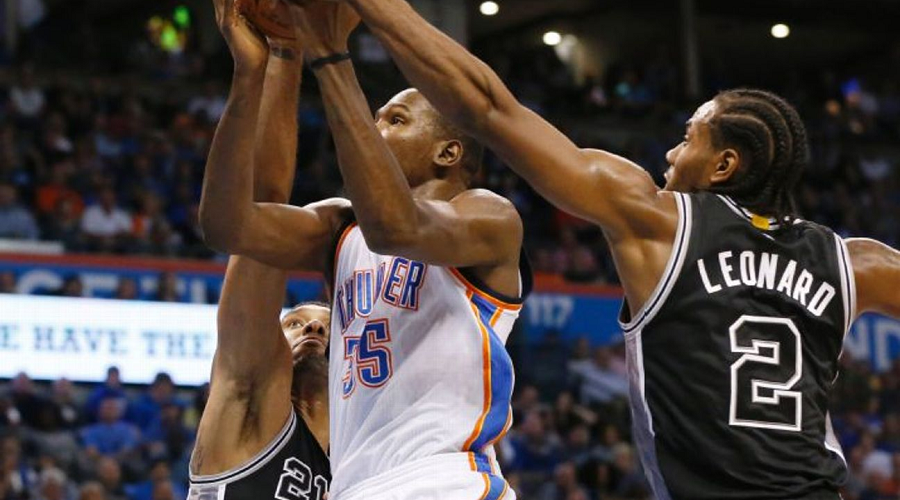 LaMarcus Aldridge did make his much-anticipated debut for the Spurs in the opener against OKC, and Kawhi Leonard proved that he could be on the running for the season’s MVP race, scoring a career-high 32 points and tallying eight rebounds, three assists and two steals for the Spurs in one of the most well-rounded games of his career, but San Antonio could not finish off the game. In main, San Antonio suffered because of a dismal showing from veterans Tim Duncan and Manu Ginobili, who struggled against the pacey Thunder team. If they are to avoid a similar predicament tonight and record their 13th straight home win against Brooklyn tonight, a better performance will be required from the veterans and Aldridge, who didn’t feature much on both ends of the field like he usually does. 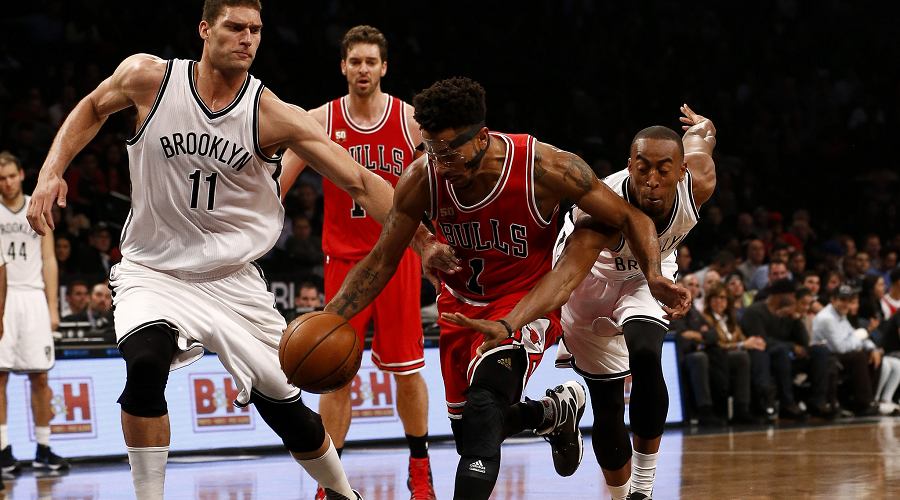 For the Nets, allowing six Chicago players to score in double-figures in the 115-100 home loss to the Bulls on Wednesday is something they’ll need correct, both offensively and defensively. Unfortunately, with a 12-game losing streak in San Antonio, and just 5 wins in their last 45 trips to the AT&T Center, it doesn’t look Brook Lopez and Andrea Bargnani will be doing any better than they did at home against Chicago, unless Jarrett Jack lights it up after missing the season opener.

Nets at Spurs NBA Odds Predictions: San Antonio records its first win of the season, but the veterans struggle once again, allowing Brooklyn (+14) to cover the spread, as the total stays low for an UNDER.
Older post
Newer post