NFL News and Rumors
With starting quarterback Sam Bradford on the mend from a concussion, the Philadelphia Eagles will turn to veteran backup Mark Sanchez in order to avoid an upset loss against Jameis Winston and the rebuilding Tampa Bay Buccaneers on Sunday. Now, let’s find out which team will bring home the bacon in this Week 11 matchup.

The Bucs got a stellar effort from their defense en route to a narrow 10-6 win over Dallas to cover the spread as a 1-point home underdog. Jameis Winston capped off the win by rushing for a 1-yard touchdown with 54 seconds remaining in regulation.Veteran running back Doug Martin added 103 all-purpose yards last weekend and currently ranks fifth in the NFL with 706 rushing yards. “We talked about being relevant. We are. We’re in the mix,” coach Lovie Smith said. “Everything that we set in front of us is there. So that’s the carrot. It would be great to win two in a row, great to get to .500.”The Tampa Bay Buccaneers are also looking to record consecutive wins for the first time in two years. The good news is that they’re playing their best ball of the season right now. “We’re closer to playing better technique, sound football. About as close as we’ve been in a long time,” Smith said. “We’re not the same old Bucs. … I’m just anxious to see what we can do the second half of the season.”Tampa Bay is ranked 24th in scoring (21.2 ppg) and 26th in points allowed (26.3 ppg).

Philly will turn to veteran Mark Sanchez in order to bounce back from their crushing 20-19 loss against mediocre Miami as a 5.5-point home favorite. 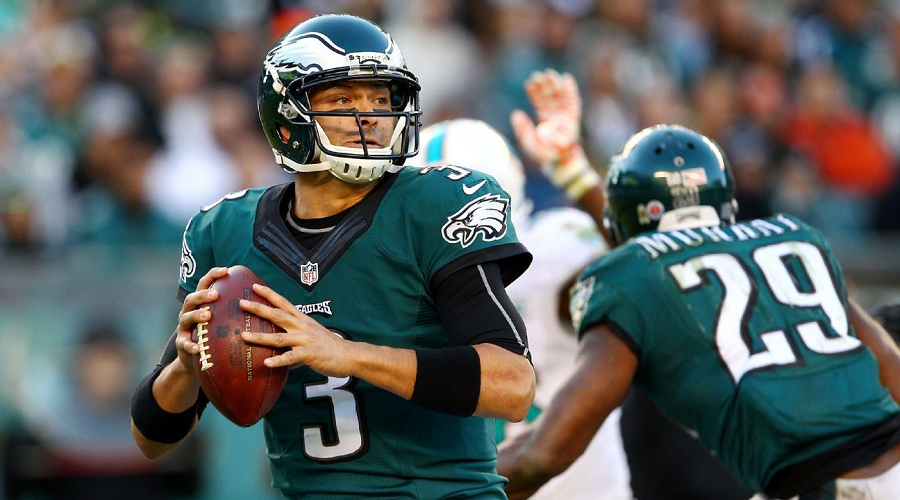 Eagles’ starter Sam Bradford suffered a concussion and a separated shoulder in last week’s loss, but the Eagles say they are confident in the former Jets starter. “I feel very confident in Mark Sanchez,” coach Chip Kelly said.Sanchez nearly led Philly to victory after driving the Birds to the Dolphins 8-yard line late in regulation. Unfortunately, ‘Mr. Butt Fumble was picked off in the end zone to seal he deal for the Fins. The Eagles blew a 16-3 lead in the loss. “I felt like we had this game won and we let it slip out of our fingers,” Eagles tackle Lane Johnson said. “That was the toughest part about it.”