NFL News and Rumors
Sam Bradford and the Philadelphia Eagles will look to bring a halt to Carson Palmer and the streaking Arizona Cardinals’ winning ways when they host their NFC counterparts in a huge Week 15 pairing that gets underway live from Lincoln Financial Field on Sunday night at 8:30 PM ET. Now, let’s find out if Bradford and the Birds can pull off the big-time NFL betting upset!

When: 8:30 PM ET, Sunday, December 20, 2015Where: Lincoln Financial Field, Philadelphia, PennsylvaniaNFL Odds: Arizona -4Over/Under: 50.5The NFL odds for this Week 15 pairing have the visiting Cardinals as 4-point favorites to beat the Eagles. If you want to bet the O/U the game total is sitting at 50.5 points.

#AZvsPHI Gameday Mag preview: “I’m the new prototype, everything you want in a linebacker.” https://t.co/uccHSmCBGT pic.twitter.com/ItFpcVffvo

Why Bet The Philadelphia Eagles Odds at +4

They’re completely desperate right now and playing good football! Philadelphia (6-7 SU, 6-7 ATS) has won two straight including its hard-fought 23-20 win over Buffalo as a 1-point home favorite the last time out. Veteran quarterback Sam Bradford completed 23 of 38 passes for 247 yards with one touchdown and one interception while Darren Sproles added 41 rushing yards and one touchdown on seven carries.Now, the Birds are preparing for Arizona’s stout defense after getting past Buffalo’s aggressive defense. “They lead the NFL in blitzing,” head coach Chip Kelly said. “Nobody blitzes more than them. They’re right around 50 percent. So, one out of every two snaps, somebody is coming, and they bring them from all different areas.”Bradford has been sacked just once this season when blitzed but has completed a dismal 49.3 percent of his passes when opponents send extra defenders after him. “You always have to prepare for the blitz, no matter who you’re playing,” head coach Chip Kelly said. “But these last two opponents – the Bills and Cardinals – are teams that really come after you. A big part of our preparation this week is trying to handle those blitzes and how we’re going to be able to pick them up.”

Why Bet The Arizona Cardinals Odds at -4

They’re the better team on both sides of the ball! Arizona (11-2 SU, 7-6 ATS) has won seven straight games including their hard-fought 23-20 win over Minnesota last week, though they failed to cover the NFL betting line as a 10-point home favorite just as I predicted. 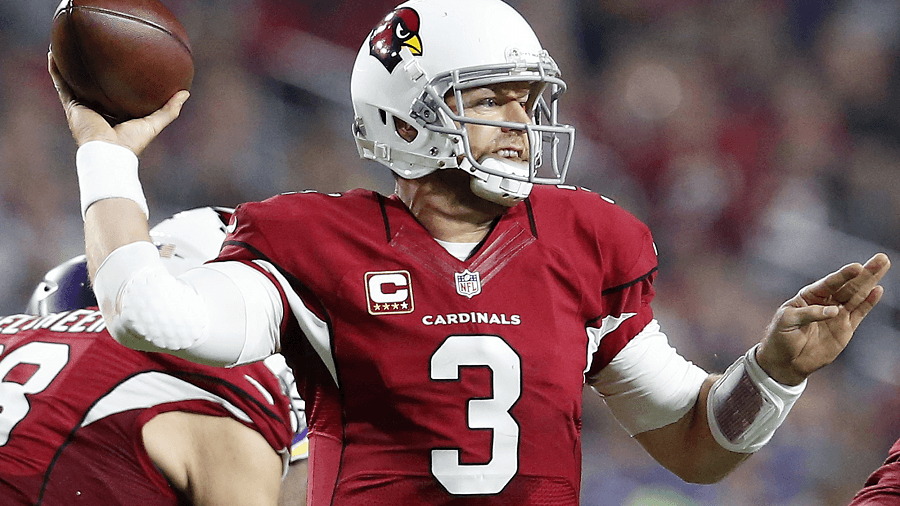 Veteran quarterback Carson Palmer completed 25 of 35 passes for 310 yards and two touchdowns and the Cardinals’ defense limited Adrian Peterson to just 69 rushing yards. Now, the Cards are focused on improving their chances of earning home field advantage throughout the postseason. Arizona can record a franchise record 12th win by beating Philly while clinching just the fifth division crown in their long history.“You’re playing for a hat and a shirt,” Arizona head coach Bruce Arians said about winning the NFC West.

I know the Philadelphia Eagles are not in the same caliber of teams as the Arizona Cardinals this season, but I’ve got the strangest sense that the Birds are going to come out and play their best game of the season to at least cover the spread against the superior Cardinals.While the Cardinals have gone 14-4 ATS in their last 18 games following an ATS loss and 18-6 ATS in their L/24 games against a team with a losing record, but for some strange reason, Arizona is just 3-7 ATS in their last 10 games in Week 15.Conversely, the Philadelphia Eagles are 7-3 ATS in their last 10 games in Week 15 while the underdog in this series has gone 4-1 ATS in the last five meetings and the home team, 6-2 ATS in the last eight meetings.My final score prediction: Arizona 27 Philadelphia 24
Older post
Newer post