NFL News and Rumors
With their postseason hopes extinguished, the Buffalo Bills and Dallas Cowboys have nothing left to play for except pride at this point. Still, their Week 16 matchup, which gets underway on Sunday at 1:00 PM ET, live from Ralph Wilson Stadium, is offering as much value as any contest on the entire Week 16 docket. Now, let’s find out why!

NFL Odds: Buffalo -6Over/Under: 43The NFL Week 16 wagering odds for this contest have the visiting Cowboys as 6-point underdogs to beat the Bills. If you want to bet the O/U the game total is sitting at 43.

Why Bet The Dallas Cowboys Odds at +6

Dallas (4-10 SU, 4-9-1 ATS) has lost two straight and three of its last four games, including their narrow 19-16 loss against the Jets last weekend. Now, the ‘Boys will give young quarterback Kellen Moore the first start of his career after the former Boise State star replaced an ineffective (horrendous) Matt Cassel in last week’s loss. “It’s not another start because I haven’t had one,” Moore told reporters on Wednesday. “But I think it will be good. It will be exciting. You’ve got a lot of good guys on this offense left. Unfortunately, we’re not playing for a playoff game, but we’re still playing for something, and we’re excited about the opportunity to play a game.” Moore went 50-3 as a starter at Boise State but still went undrafted in 2012. Still, Moore looked infinitely better than Cassel last weekend.

Why Bet The Buffalo Bills Odds at -6

Buffalo (6-8 SU, 6-7-1 ATS) has lost two straight to see their postseason hopes go down the drain and enter this contest coming off a dismal 35-25 loss against mediocre Washington as a 2.5-point road favorite last weekend. Making matters worse is the fact that the Bills are reportedly having in-house issues with loud-mouthed head coach Rex Ryan. Buffalo has repeatedly underachieved in Ryan’s first season with the franchise – continuing a trend that Ryan started four years earlier with the New York Jets. Now, with four years remaining on his contract, Ryan is in full-fledged denial. “This has never been about me,” Ryan told reporters, “and it won’t be about me.” “It’s driven through frustration. In a lot of people’s eyes, our own included, we’ve underperformed, I think,” Ryan said. “That’s where this stuff is driven from. Any time you go through a season when you set high expectations for yourself, you have high expectations for yourself, you open yourself up to this.” Making matters even worse is the fact that players are openly questioning Ryan’s defensive schemes. “We haven’t had the results to match my enthusiasm about this group,” he said. “We know it needs to get better.” 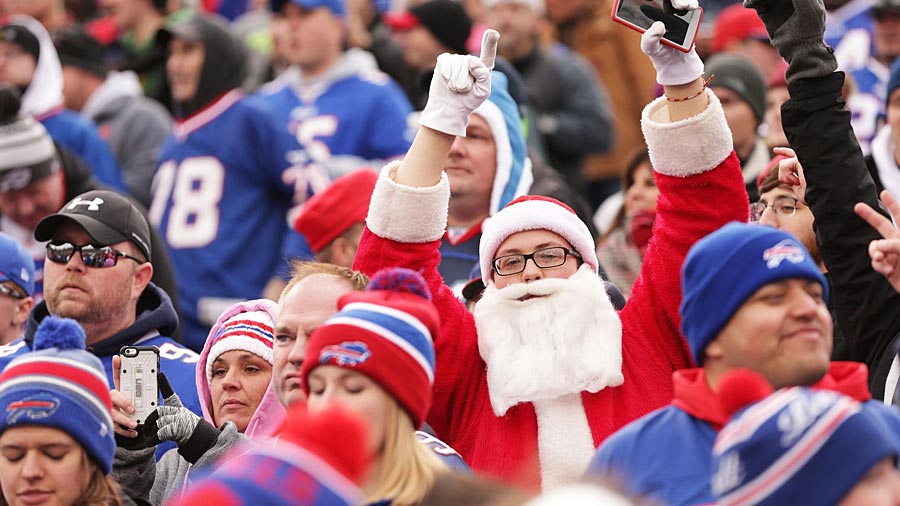 The Buffalo Bills may be one of the biggest bunch of underachievers in the league this season, but there’s a reason why 59 percent of the betting public likes the Bills to cover the NFL betting line in this Inter-conference matchup and it’s because the Dallas Cowboys are atrocious. I know the ‘Boys are a robust 11-5 ATS in their last 16 road games, but Jerry Jones’ squad is also just 3-8-1 ATS in their last 12 games overall. On the flip side of the coin, despite their underachieving ways, the Buffalo Bills are 7-2 ATS in their last nine games following an ATS loss and 8-3 ATS in their last 11 games following a straight up loss. The Bills have a boatload of talent on both sides of the ball and an aggressive defense that I expect to force at least two costly turnovers in this contest. Buffalo may not have much to play for besides pride, but they’re still better in all three phases  than the Cowboys and will get the win and easy ATS cover! My final score prediction is Buffalo 31 Dallas 14
Older post
Newer post