NFL News and Rumors
The Denver Broncos have the top-ranked defense in all of football this season, but their uninspiring offense is the likely reason they’re currently not favored to beat the Carolina Panthers should the two title contenders meet in Super Bowl 50. Thanks to this expert betting breakdown, you’re going to find out if the Broncos can pull off the ‘upset’ to beat Carolina in their possible Super Bowl 50 pairing.Super Bowl 50 OddsCarolina -3.5

.@CameronNewton: “I used to dream of being in this position. I don’t get nervous. ” #KeepPounding

Why Bet Denver to Beat Carolina?

Because they’ve got an elite defense and Hall of Fame-bound quarterback! The Broncos have an elite defense that ranked first in total defense (283.1 ypg), first against the pass (199.6 ypg), third against the run (83.6 ypg) and fourth in points allowed (18.5 ppg)!More importantly, the Broncos have a pair of elite cornerbacks in Chris Harris Jr. and Aqib Talib that both earned Pro Bowl berths this season and could pick off the often inaccurate Newton if given the opportunity.The Broncos tied for seventh in takeaways (27) and have a pair of Pro Bowl linebackers that could very well make life on Cam Newton tougher than he’s had it in any game this season.Denver also has a Hall of Fame-bound quarterback in Peyton Manning and although he’s clearly not the player he used to be just a couple of seasons ago, is still a player than can beat the majority of defenses with his mind.The bad news is that Denver has gone from a team that ranked second in scoring in 2014 (30.1 ppg) and first in scoring in 2013 (37.9 ppg) to one that scored 30 or more points just twice this season.The Broncos ranked just 14th in passing as Manning made nine starts and backup Brock Osweiler, seven. Osweiler ranked 30th in touchdown passes this season (10) while Manning finished one spot behind him with nine TD passes.Despite their struggles throwing the ball this season, veteran wide receiver Demaryius Thomas managed to record 1,304 yards in receptions while Emmanuel Sanders recorded 1,135 yards. Both wideouts caught a half-dozen touchdown passes.

Why Bet Carolina to Beat Denver? 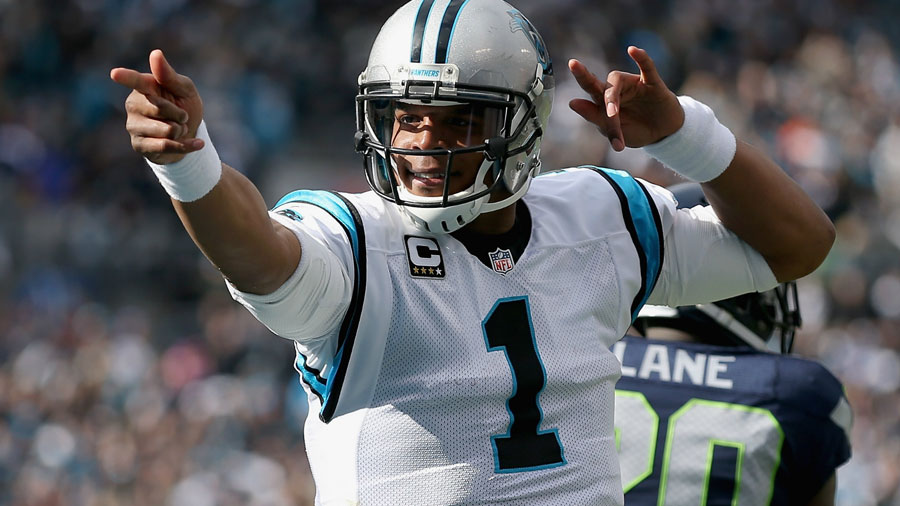 Because no one’s been better than Cam Newton this season – and the Panthers’ stout defense!The first thing you need to know about Carolina is that no team has been able to stop Carolina’s Cam Newton this season. Not only did Carolina lead the league in scoring during the regular season (31.2 ppg), but they did it based mostly on the strength of Newton’s play.Prior to this season, Newton had already set numerous NFL records, but this season, he’s added to his growing legend in a big way.Only one NFL player who has run for at least five touchdowns in each of the last five seasons, and it’s not a running back. It’s Newton.Newton has 43 career rushing touchdowns in his career and tops the list of NFL quarterbacks in this category over his first five seasons. Not only has no quarterback been able to match Newton’s rushing prowess over his first five campaigns, but no quarterback has even come close with former Minnesota Vikings star Daunte Culpepper ranking second with 26 rushing touchdowns in his first five seasons.Newton is also second on the all-time list for quarterbacks with three or more passing touchdowns and at least one rushing score in a single game.Hall of Fame signal-caller Steve Young has six such games in his career and Newton already has five to tie the legendary Fran Tarkenton.Newton also ranks second to Young (17) and Tarkenton (16) in games with two or more passing touchdowns and at least one rushing touchdown (15).Newton also holds or is closing in on other numerous NFL records, but you get the idea.On the other side of the ball, I’ll get right to the point by saying that I have absolutely no doubt that Carolina’s shut-down defense will cause Peyton Manning and the Denver Broncos’ middling offense all the can handle and then some.Carolina ranked sixth in total defense (322.9 ypg), 11th against the pass (234.5 ypg), fourth against the run (88.4 ypg) and sixth in points allowed (19.2 ppg) and I believe they’ll be able to get to Manning in this hypothetical matchup

No matter how hard I try to envision it, I just can’t see the Broncos beating the Carolina Panthers if they do meet up in Super Bowl 50.The Panthers have a defense that is comparable to Denver’s, if not better, but offensively, the Panthers are head and shoulders above the Broncos!In the end, I believe Cam Newton will be the best quarterback on the field and it is that distinction that I believe will carry the Panthers to the outright win and ATS cover against the Broncos.
Older post
Newer post